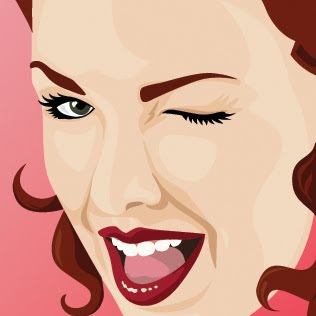 i recently read a post that reminded me of an incident. depending on which side of the eyelid you found yourself that day, it could have been funny...or not.

i was doing casualty sessions after hours. it was a way of making ends meet while i was specialising, but mostly i just hated it. anyway one night, between the snotty noses and neurotic parents a patient actually came in with a casualty-worthy complaint. he had a small laceration on his forehead. we decided to glue it together with dermabond because it was so small. i decided to leave it to the sister. after all the unit was full to overflowing with snotty noses and paranoid parents that i was required to work through and get rid of.

after a while the sister came to me. she had terror written all over her face. i tried to think what had gone wrong that she looked so shocked. i started imagining i had somehow missed a life threatening injury and the patient had crashed. turns out the problem was not so deadly but just as sticky.

while the sister was applying the dermabond, which is essentially superglue, a drop fell into the patient's eye. luckily he had closed his eye on time. unluckily he had developed a permanent wink.

i confess i laughed. the sister was not impressed. she took me aside and begged me to help. i stopped laughing. it seemed it wasn't funny to her and unless the patient was deliberately winking to show he was in on the joke, it wasn't funny for him either.

the problem with gluing your eyelid together is you can't dissolve the glue with acetone because acetone would do its own damage to the eye. so i took a scalpel and very slowly and meticulously got to work. as it turned out, the eyelashes where glued together along most of the eyelid and only in certain areas was skin involved. by the end the wink had been surgically removed, along with all the eyelashes.

i often wonder if there is anyone else who can say they have surgically removed a wink, and broken bottle injuries from bar brawls don't count.
Posted by Bongi at 8:06 pm

sq2m. Well, that's one way of preventing irritating eyelashes in your eye; drastic but effective.

Aaw but doctor, what if this man misses out on being a perminent ladies man because he cannot "Autowink"?

I give you a fast, non-permanent, wink for this post. Want to keep my eyelashes ;)

I am currently working on a series for the Discovery Channel about people who have been attacked by wild animals and survived. I found your blog interesting and wanted to ask you some questions with regards to our series.

Would it be possible to communicate with you and ask some questions.

Thanks for your consideration.You can reach me at info@ajetv.com
Best,
AJE Productions

Was once in Wits Prosthodontics when they were trying to place a false eye in a cancer-ridden patient's face and they dropped the eye inside. Whoops. There is was lost in the wrong place. They wanted to laugh and panic at the same time. GA and operating theatre later and the eye was restored to the correct orifice.