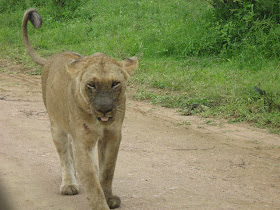 another trip to the kruger produced a beautiful sighting of the above lion. her face is stained by the remains of a dead hippo that they were scavenging off. she walked so close to the car that i actually had to stop taking photos to quickly close the window just in case she decided to have my arm for dessert. 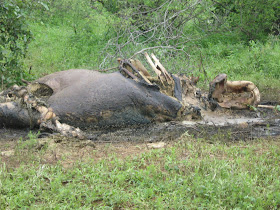 the above picture is what remains of the hippo after two days. the lion still monopolised the carcass but the trees were heavy with vultures patiently waiting their turn. the maggots had also had a good innings.

it is difficult to explain how cleansing for my soul a visit to the park is. suffice to say it is.
Bongi at 9:00 pm
Share