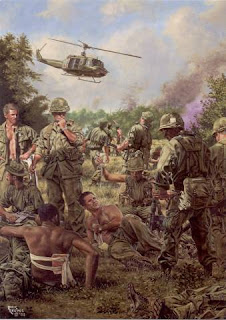 triage is taught to us all, but unless you find yourself in a war, you don't use that skill too often. when it is needed, somehow all those lectures don't seem to help.

i was working on new year's eve in casualties in qwaqwa. the local population was about one million and the average income was pretty much on the bread line. the bread line, for those who don't know, is way above the alcohol line and significantly above the knife line. there was no shortage of drunken stabbings.

as can be imagined, that night was busy and the later it got, the busier it got. the early evening was only much worse than an average night. but by ten pm all hell had broken loose. the stab wounds started coming in. initially they came in at a rate of about one every twenty minutes, but soon they were walking or being carried through the doors at a rate of one every two to five minutes. there was no way of keeping up. also standard clinical parameters where less helpful. everyone passed out just after lying down (thanks to good old recreational ethanol).

the nurses took vitals as fast as they could, but they could not get to everyone. one of the reasons is there were not nearly enough beds so the bodies lay on the floor so thickly they blocked up the passage. you could literally not walk down the passage because you would stand on the patients.

our triage became fairly coarse. at a stage, looking for a place to plant my next foot between the bodies on my way down the passage, a patient looked up at me and asked;
"when are you going to get to me? i'm in pain!" the simple fact that the patient could speak meant that he was in a much better condition than almost everyone there. the fact that he was making a nuisance of himself meant he was going to wait a very long time.

but the ability to speak was only present in about one percent of the patients, so how did we triage the rest? in the end what it came down to was one thing and one thing only. if the puddle of blood around the patient was growing in size, that patient would get attention first. all the rest were done in the order of how they lay. the ones closest to the suturing room were treated first moving gradually away. one of the reasons for this is the people working in the suture room were figuratively snowed in by the bodies. they had to dig themselves out by suturing the patients and sending them on their way. even if they wanted to treat someone else first they literally couldn't get to him.

finally that night came to an end. everyone was exhausted and limped away from casualties. some of the patients limped too.
Bongi at 10:23 am
Share