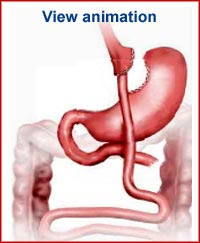 bariatric surgery is on the up and coming in our country. i understand it is very common in the us of a. being from a country that openly advocates alternative forms of medicine (our minister of health publicly supports the eating of garlic and beetroot as an alternative treatment for hiv and aids and does not support antiretrovirals at all and our previous deputy president in open court described taking a shower as effective prophylaxis against hiv after having unprotected sex with a known hiv positive partner. it was a rape case) i decided also to give an alternative opinion about weight loss therapy based on a case i once saw.

a lady presented in casualties. her history was as follows. she had read somewhere (possibly the internet, but i don't really know) that there is something in the urine of pregnant women that causes weight loss. i'm not personally aware of this substance but i don't claim to be an expert on weight loss or chemicals found in the urine of pregnant women. anyway, as it happens, her domestic servant was pregnant at the time. she did what i'm sure we all see as the logical thing armed with her new knowledge; she asked her domestic servant to urinate in a bowl, she drew up the urine and injected it into her abdominal fat. i never heard where she got the syringe and the needle. like many overweight people the patient also had type two diabetes (predisposing to some degree of decreased immunity).
when she presented, she was not in a good way. she was in diabetic ketoacidosis, was in shock and worst of all had subcutaneous crepitations on her abdominal wall around the site of the injection. this is an ominous sign, indicating necrotising faciitis (hyped in the media as the flesh eating disease). she needed to get to theater and fast. the only way to treat this very rapidly spreading infection is to cut away all the affected tissue, right down to the muscle. to get the desired results (arrest of the spread of infection) sometimes takes more than one visit to theater. if she survives the initial onslaught, at a later stage the wounds can get skin grafts.
a colleague of mine did the initial debridement (cutting away the offending tissue) after the appropriate rapid resus. she ended up in icu where she actually improved. the colleague asked me to accompany her on the second visit to theater where we finalised the debridement (mannaged to get rid of all the infection).
once we were finished, the patient was missing all her subcutaneous tissue and skin of half of her abdomen, from the loin region to the shoulder, from the midline to posterior on her flank (almost onto her back). because she had a generous layer of fat, this constituted a massive tissue loss.

fortunately enough, she then recovered pretty much without further incident and was soon discharged to the ward. we then embarked on the ordeal of getting the exposed tissue covered with skin grafts, but after a few more visits to theater, that too was done. she was ready for discharge, alive.

when she left the hospital, she struck a rather pathetic and maybe frightening figure. her left side was still fairly overweight, although the overall ordeal had caused considerable metabolic utilisation of remaining fat. the right side of her abdomen, however, had no fat whatsoever. the skin was directly on the underlying muscle. she was totally asymmetrical.

as she left i couldn't help wryly reflecting that her plan to lose weight had worked better than she ever thought possible. it seems a multidisciplinary approach to weight loss, medical mannagement (in this case the ill advised injection) combined with surgery (debridement) with just the right dose of stupidity can have very dramatic results. i only hope our good minister of health never reads this. she will probably make it part of the national weight loss program.
Posted by Bongi at 11:51 am

That is exceptionally awful. Yukko.

Did you ever see the piece on Carte Blanche featuring a certain Pretoria surgeon who does pile of gastric bypasses for people trying to lose weight? The article was so well done that I actually thought afterwards 'wow, this procedure is actually a really good one.' Later, a friend of mine who works for Carte Blanche told me that the surgeon only agreed to be interviewed on the condition that the side effects and complications of the procedure would be hugely skimmed over in the article. I felt bad that I'd been so gullible, and now maintain my sceptism regarding regarding the procedure.

scepticism is very good! however,i think our opinions as doctors should not be too influenced by tv programs or even less by hearsay from journalists, but rather by present literature and scientific norms.
i personally think the gastric bypass is a very good procedure if done for acceptable indications.

also if it is the surgeon i think it is, i had the priveledge opf working with him for two months. he does everything by the book and hopefully you know that there will always be complications, unfortunately. as the saying goes, you cut you cry.