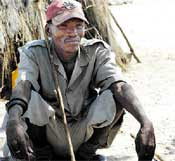 earlier this week there was an interesting bit of news about a small group of bushmen that won a court battle against the botswana government allowing them to return to their traditional hunting grounds in the central kalahari game reserve. i thought this very interesting on many levels.
most westerners don't know about bushmen at all. bushmen, or san as they are more correctly termed are a group of hunter gatherers that are the origional inhabitants of southern africa. in fact if national geographic is to be believed in their quest to genetically map human migratory routes they are the closest genetically to the origional human beings. it seemed that they stayed more or less in africa while the rest of us wandered off a bit, thereby undergoing certain adaptive changes. i assume the san also changed, but less than the rest of us. the san and the khoi-khoi (or as the first whites in southern africa called them, the hottentots) are both part of a distinct racial group called the khoisan. the khoi-khoi were the most recent branching of the san (about 2000 years ago). i find it interesting to think of the multiple branchings off of them over the years, each one probably giving rise to some branch of mankind and in relatively modern times we actually have a living example of how it happened.
but back to the court case. the bushmen are going to move back to the lands they were evicted from from about 1997 to 2002 to make way for the conservation area. what's interesting is that the botswana government isn't goig to change the status of the area, so it will still be a national park. the other interesting point is that one of the reasons the government gave for not allowing them to continue their nomadic lifestyle was that it was impossible to provide them with sanitation, water, medical and the like. the court ruling apparently absolves the state from these responsibilities for those in the park. they will therefore truly have to return to the old ways.
san of old lived in total harmony with the environment in strong contrast to the rest of mankind. the fact that they will now be living in a national park seems to imply that their old culture will also be preserved. this could raise certain questions of possible discrimination. are they being equated to animals that are being preserved in a game reserve? the next interesting question is the question of hunting. in the past, the san used to hunt using poisoned arrows. they would then track the animal for a few days while the poison slowly took effect through some of the most inhospitable and arid areas of africa. if they are in a national park, will their be restrictions on their hunting? will they only be allowed to hunt by quota or will they be given free reign? will they be forbidden from using modern weapons like guns, thereby forcing them to revert totally back to the old ways?
there are so many interesting permutations to consider. the fact is they are returning to their old ways by choice after a hard fought court battle and for my part i wish them well and god speed.
Posted by Bongi at 3:30 pm

Your posts take us into a world that is familiar (and frustrating, evidently) to you, and as foreign to the rest of us as it could possibly be. It's a fascinating place you let us see. Thanks for this blog. You have my admiration for practicing your craft as you do.

being a regular reader and admirer of your blog, i am pretty flattered at your opinion. thank you.

Good luck with the new hospital, and my best wishes for you for the year 2007.

Hopefully you can change some things in Mpumalanga, if they don't fire you first.

hello, as far as I understood, the khoi khoi are not so much a branching off than simply san who got cattle and developed a different culture since herding is different from hunting and gathering.

lilia, you are exactly right genetically. however there are a few reasons to believe this is culturally exactly what happened numerous times over the history of mankind. san speak a multitude of languages, som seemingly unrelated. the khoi-khoi, although they outnumber the san, all spoke the same language (still exists in remote areas)this seems to indicate that only one group of san moved from hunter gatherers to a pastoral lifestyle. the lifestyle change meant that they were more successful and proliferated faster, thereby soon outnumbering all the remaining small san groups. they also became slightly bigger, although they are still much smaller than other humans (with the possible exception of the congo pygmies. i'm sure if they were given another few hundred years of uninterrupted development they too would have embarked on the journey of change that all other humans followed and left the san, even genetically. we may never know.

Whether the cultural branching causes the genetic branching or vice versa is very much a chicken-and-egg situation. I believe they cause each other, and it takes a long time. It is very interesting that there was only one pastural branch in the last few thousand years. Clearly the hunter-gatherer lifestyle was very compelling for the san, even if it did not help them proliferate, or compete with the khoi-khoi, bantu or whites.

I think you ask many interesting questions concerning what rights the san should and would get regarding their ambigous role in the game parks. Obviously our laws, as well as our cultural attitudes do not easily accomodate this situation. My belief is that it is not what people choose to do that defines their status, but what choices they have. Just as a woman that chooses to stay home with the kids rather than work is free and modern, while the woman that is expected to stay home is being descriminated against.

So san that choose to live 'in the wild' chould be allowed to do so. I also believe that their right to hunt as they please is matched by their lack of access to modern facilities (including medicine). As soon as they operate within the modern economy, and thereby break the balance with nature, they need to be under restrictions, just like everyone else.

Hmm.... I seem to have come full circle. I cannot imagine them being denied, or refusing, modern help (notably medical). So I doubt they can avoid being subject to poaching restrictions either.

I guess this will be a big experiment to see. They've lived with a static culture for so long, perhaps it is strong enough to survive the obvious temptations of the modern world.