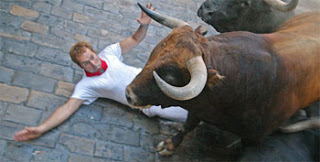 the basic topic behind this post it seems to me will tend to reccur. i therefore must accept it and get on with the post.
i presently have a patient in my care who has a very tragic story. he is hiv positive with a cd4 count of 25. (not good). he works in umtata in the eastern cape. there he went to a sangoma, apparently complaining of chronic diaree and generally not feeling too well. the sangoma decided the needed treatment was an enema administered through a strong bull's horn. the horn was duly inserted into the anus, through the anteriour rectum wall and the enema was pumped freely into the peritoneal cavity. (although a strong bull's horn might be the desired mode of administration, possibly because a weak bull's horn would have lesser curing potential, i personally think that something slightly less traumatic may just suffice). as you can imagine, the patient didn't improve. in fact he got worse. he then presented to a surgeon (a few days later) who operated. the rectum was repaired, the abdomen was rinsed and that was that. or was it??
a few days later, the patient developed acute abdomen again. the surgeon took him back to theater. the notes report he found multiple spontaneous perforations of the cecum (completely the other end of the colon) as well as breakdown of the rectum repair. these were all repaired, a transverse loop colostomy was brought out and pensil drains were left in the abdomen. the abdomen was only loosely closed.
at about this stage the patient mentioned he came from nelspruit and was duly posted off to me. when he arrived here, he was in prerenal kidney failure, his liver enzymes were totally deranged (possibly overwhelming sepsis but just as possibly the direct known hepatotoxic effect of many sangoma concoctions) his viral load was as high as his cd4 count was low and his white cell count was a dismal 2,6 as opposed to a crp of over 300. he was leaking feces from everywhere. the entire laparotomy wound was one massive contaminated mess.
what to do?? i decided to operate (after appropriate attention to his fluid state). inside was a sewer. there was no corner of the abdomen spared. my basic plan was to exteriorise everything. inside the cecum was a sieve of multiple holes and necrosis. the rectum had broken down again. there was also a spontaneous hole in the small bowel (middle). i did a right hemicolectomy with an end ileostomy and brought the colon out through it's own site. i debrided and repaired the small bowel hole. i rinsed copiously. i placed drains absolutely everywhere. i placed a post treitz feeding tube. i closed with tension sutures. i bundled him off to icu. i prayed. i might have muddled the order of things, but icu was towards the end. what was interesting to note at operation was the total lack of fibrin or any adhesions in the abdomen. the body wasn't even trying to heal itself.
the patient still developed leaks. i'm now going for controlled fistulas. some things are not so bad. he is no longer intubated. his kidney function recovered. his liver function is on the mend. but quite frankly i wonder what his chances are with zero immune response and zero healing.
i wish i had more time to discuss this case. there are so many interesting points. a starting point may be the fact that my physician friends told me i should have left him to die, arguing that it was not right to dedicate a long term icu bed to someone who would die anyway, thereby depriving the bed from someone else who has a chance. besides the obvious feelings of loss and failure if he dies, i'll be the butt of many of their jokes. the converse is not true. if he lives there will be no acknowledgements or accolades.
the other point is the sangoma and his role in the treatment of hiv. bear in mind our minister of health publicly says their role is crucial. i differ somewhat. (this is not an isolated incident). it is always also fascinationg to me to see how they are totally absolved of responsibility when things go pear shaped. in fact if the patient dies there will be fingers of accusation levelled at the western medical establishment from them. "see even the western doctors couldn't save him" or worse "look how sick their western medicine made him".
but if i could give any advice, when you have hiv and your cd4 count is 25, don't get a rectal perforation. it is not a good idea.
Posted by Bongi at 3:58 pm 1 comment: 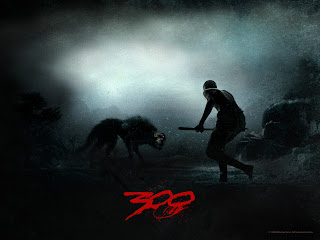 recently i watched the movie 300. personal taste i suppose but i thought it was great. the scene depicted here where the barefoot boy is out on his own in the snow and slays a wolf to prove his worth reminded me of a case i saw.
when i was working at witbank in the winter we admitted two boys, about 16years old each. they came in from initiation school. they had been taken into the mountains, barefoot and left out in the cold, to prove their manhood. their toes froze off. the one ended in a forefoot amputation and the other lost a toe here and there. somehow the reality of that sort of thing took from the magic of that scene oin the movie. i couldn't help wondering how good a soldier you make if you deprive him of his feet.
to be honest in our neck of the woods we don't really get very bad initiation school injuries. in the eastern cape where the initiation culminates in circumcision, their regular gangrene results in amputations far worse than mere toes and feet. ironic to start your journey as a 'man' without that specific anatomic attachment.
what i found very interesting with our patients was that when they heard they would have to have operations, their main concern was would they be out of hospital in time for the final ceremony of the initiation school which would confirm them as men and no longer boys. the fact that they wuuld go into life partly crippled paled in comparison to the possibility of continuing life as a boy and never achieving manhood (in their view). interesting to view these sorts of things. i really felt for them. i also was once again reminded of the fragile male ego. different in different cultures, but it's amazing what we would go through to be viewed as men.
but despite all this, i still thought it was a great movie.
Posted by Bongi at 4:02 pm 4 comments: