'tis the season to be jolly 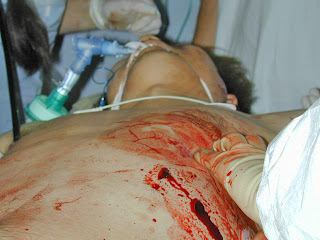 in our training, a friend and i tended to work together when it was the season. neither one of us really celebrated christmas (he was hindu and i didn't care for the commercialisms of the holiday), so it sort of worked out fine.

however, walking down to casualties to see yet another stab wound caused by festivities (read alcohol) and some trivial argument with his 'best friend' when pretty much everyone else was relaxing at home or some holiday destination could cause a bit of healthy scepticism in the so called meaning of the season.

we used to stroll down the deserted corridors, wiping the sleep out of our eyes on the way to casualties. one of us would say
"'tis the season to be jolly!" and the other would reply,
"fa-la-la-la-la-f#@king-la-la-la"

and that is how we truly felt.
Posted by Bongi at 9:09 am

Some days that is how it feels. Here's hoping there are others that improve your view of our fellow man.

By the way, you've been given an award--Be-The-Blog. Check my blog for more details

I am looking forward to taking call this season. I don't celebrate christmas either. When I still scrubbed for the hospital, it was the one holiday I always signed up to work.

I always hated being on call on Christmas or New year, for the reasons you have graphically illustrated.