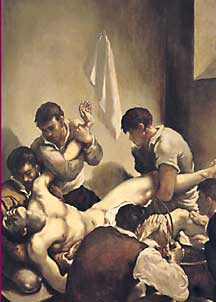 in a previous post i came across as caring and in touch, but sometimes i forget to be this.

i was doing an above knee amputation. my consultant had recently explained a technique whereby one attaches the muscle to the bone stump directly and not just to the membrane around the bone (the periosteum). this required that holes be drilled into the bone which would be the anchor points for the muscle. i had never done this before and was grappling with the drill.

at this point, as serendipity would have it, the small porthole window of the door leading to the scrub room filled with the eager faces of a bunch of youngsters. a theater sister who was taking them around came in and informed me that they were school students that were considering medicine as a career and had come to the hospital on some sort of career day outing. she asked me if i'd mind if they came into theater in groups of two to get a better understanding of what we do.

now, understand, i love surgery. any opportunity i get to promote it i take, so i thought this was a great idea. of course i said yes. the first two came in.

let me take a moment to sketch the scene. i've just removed the leg. the bloody stump is sticking out like some cheap prop in a second rate horror. i'm trying to get the bloody (or should i say blasted) drill to work, so i'm not really doing anything besides getting more frustrated by the moment. the students come in and see this setup. not being overly busy, i ask them where they are from. the first guy says he is from a particularly good rugby school in town that, coincidentally, had just lost the gala match to my old school. even the drill could wait. i asked him about the game and what he had thought. he seemed a bit withdrawn and non responsive. i couldn't understand this. it had been closely contested and although his team had lost, they had played well.

then i noticed that the poor fellow was pale and his eyes seemed to be glazing over. the sister quickly took them out. no more scholars came in after that. i did see the horrified face of one young girl peep in just before they moved on. i think i even saw tears. later i heard that some of them needed to be resused with tea and sugar.

in retrospect i was a bit foolish. not all school children who think they want to be doctors are cut out for the job. and not all doctors are cut out to be surgeons. if i had had the opportunity to go into theater as a school student i'm pretty sure i would have thought, 'cool! he's actually cutting a leg off!! wow!!' but that doesn't mean these particular students are also going to think like that. i actually should have known that it was fairly unlikely that my and the sister's good intentions would have fallen on fertile ground.

Email ThisBlogThis!Share to TwitterShare to FacebookShare to Pinterest
Labels: above knee amputation, amputation

I am a premed guy over in Michigan, USA. If I were to walk into that type of OR, I would definitely think thoughts like what you said you would have thought.

Brilliant post! If you'd said something along the lines of "well this is what you get for missing that drop goal" the poor student from the rugby school would've probably crumpled in a heap on the floor!
(But you wouldn't have said that, because you're terribly professional & I just have a wicked sense of humour, sorry!)

I'm the only one in my department who spends time in the OR every week (as a videographer). Every now and then colleagues ask if they can tag along, eager to see some surgical action. I usually play safe and bring them to a laparoscopy or something.

But safe is no fun! Maybe I'll choose an amputation next time. Or better still, a pelvic exenteration ;)

Nice story. I don't know how I would have been in that case as a high school student. That was my first case as a med student. I passed.

One of the most horrible cases I recall was a young farm worker who has his right arm pulled off his body and half of his trunk skin along with it by the corn harvesting machine. It's a good thing some of us can deal with the "shifting" or "numbing" of emotions required so the life-saving work can be done. Still I am haunted by that case.

it is so easy to forget the real horror of some of the stuff we see... i frequently have these wierd moments in casualty while we are suturing horrific, disgusting lacerations etc (usually at 4am) and discussing how plans for the rest of the weekend. its funny how you learn to adapt. i also almost fainted as a matric watching an explorative lap for an elderly lady (LOTS of fat)... have learnt to bite the bullet and carry on. this is our job now: not always glamorous or pretty, but always interesting!

I remember when I was in high school I got to watch an open heart surgery. The surgeon was also very happy to show me what he was doing: "Look, I've got his heart in my hand." I left soon after that to sit down, but I've gotten over that feeling long ago. Now, I'd ask if I could stick my hand in too.

At least you can consider that they were saved from wasting time considering a career that would not have worked out for them. :)

probably there were operations that would have been more tolerable. bad luck. could have started with a lipoma, or something.

amputation, as i wrote once is a good example of the disconnect with which we live: finding some satisfaction from a job well done, in the face of horror.

The first surgeries I watched were pretty benign - however, the kid that had his arm chewed off by a farm machine was pretty groovy. The only time I had to leave the room was for the draining of a very large and seemingly painful abscess on someone's face. I don't know why I can tolerate anything but work done on a person's face. . . I still think it was a great opportunity for those kids. I wish more schools would do that.

Yeah, probably a bad choice for the first experience! I still find handing off the speciman unsettling, but mostly because losing a leg is one of my big fears.
Sometimes it doesn't matter the procedure....those who can handle it do, and those that can't don't!

I imagine that he was horrified by the fact that you could be cutting off a human leg and casually stop to discuss rugby!

Just found out I'm going to film a transpelvic amputation in two weeks.

Should be interesting. Ever done one of those?

Fun hearing your (and Dr. Schwab's) voice on the Dr. Anonymous show, btw.

sterile, here the orthos do those. sometimes they ask us to get control of the artery and vein before they continue. but no, i've never done that.

Done by orthos here too, when I think about it.

I want to be a surgeon, but can't stand amputations... There is something grotesque with a limb separated from the body. I will have to get more grit to prepare myself later in my career...

Im currently a matric student, went to the state hospital for a week - mainly in ICU but also a day and a half in theatre! Loved it, must say orthopedics bore me...(no offence to those surgeons), but the other stuff was amazing!

And Anna, I think the responsibility is on the student to organise to go work shadow in a hosp., i did it, its part of the whole growing up process - not being spoon-fed the whole time!

Another great story. I would probably have asked if I could touch the amputated limb. My blood-thirsty wench of a daughter agrees with me. Perhaps I should send her to you so she can learn surgery!