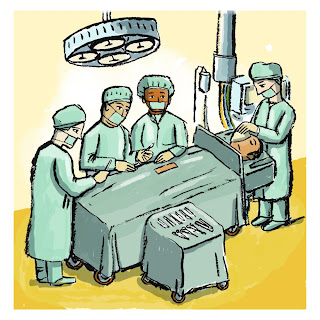 anaesthetists and surgeons work together quite a bit, but they are very different creatures. sometimes it takes a bit of effort for them to understand each other and get along. some would say it takes effort from pretty much anyone to get along with a surgeon. so it is nice to hear a story occasionally of an anesthetic colleague that is willing to do what is needed to understand and get along with the general surgeon he was working with. these were the observations of a student during his rotation through the anesthetics department.

when the student in question arrived at work, he was quite excited to hear that he was dealt into the emergency theater.

"off you go," said the prof to him, "they are still busy with a trauma case from last night."

when he entered theater it was clear that there had been quite a lot of action. the floor was covered in blood which had been smeared around by the feet of the surgeon and the floor nurse, creating a macabre work of art with bold red strokes of the brush on the canvas which was the floor of theater. against the wall on a rack hung multiple blood soaked swabs, bearing testimony to the battle that had already taken place in that small room. the surgeon was still frantically busy working in the open abdomen, his arms besmirched with dark blood to his elbow. the front of his gown was similarly stained. the student looked around and took in the complete picture of this fight between life and death, yet immediately he noticed something that didn't seem to fit in with the high stress situation that met the astonished student.

off to one side, the anesthetist sat quietly in his chair with his arms folded and a calm expression on his face. he wasn't even looking at the monitor. in fact he sat slightly behind it. from this vantage point he glanced up, greeted the student and offered him a chair. the student sat down wondering at the steel nerve of this anesthetist in the face of such a tense situation.

then an alarm went off on the monitor. the student jumped up to get out of the way as his senior finally moved to see what was happening. but all he did was to turn the alarm off and sit down again. and so the student sat there with him, too nervous to speak and wondered what was going on.

after quite some time the intense concentration of the surgeon was broken. he turned to the anesthetist.

"how are things going up there?" he asked and then as an afterthought added, "the bleeding is now under control."

the anesthetist slowly looked up and spoke for the first time with a wry smile plastered across his face.

"well actually the patient has been dead for quite some time now," he said, "but i know how much you surgeons like to operate and it looked like you were having so much fun, i didn't want to disturb you."

Your stories are an absolutely wonderful read. Although at times probably less wonderful to witness.

They make me remember of the stories of Nasreddin Hodja. Here's a short one:

A man climbed up a tree but couldn't get back down. He asked the help of the passers-by. Nasreddin Hodja happened to be there too and said that he could help. He found a long rope and threw one end of it to the man up on the tree.
`Tie this around your waist!' he said.
`What are you doing Hodja Effendi?' the others wanted to interfere, `You cannot rescue a man from a tree like that.'
`Trust me,' the Hodja tried to calm them down, `this method is tested and true.' Once the man wrapped one end of the rope around his waist and made a strong knot, Nasreddin Hodja pulled the man down amidst cries of the watching crowd. The man fell on the ground with a huge thump and was badly hurt.
`Hodja Effendi, we warned you. Look what you have done.' the crowd said.
`I once saved a man with this exact same method,' the Hodja explained, `but I cannot remember if it was from a tree or from a water well.'

I'm personally thrilled that this makes 3 posts since your March post, so I no longer have the "Twisted Testicles" story showing up every day on my RSS feed!

The anesthesiologists here claim to sit on the 'right side' of the blood-brain barrier.... I must say though, I was once in an emergency case during my rotation through neurosurgery in which we were doing a decompressive craniotomy to try and save a motorcycle accident victim (alternatively known here as Morbus Kawasaki). Orthopedics were working frantically and simultaneously on a Femur fracture that was bleeding relevantly. The CCT looked quite bad already before we started. Before the dura was even open, the experienced neurosurgeon leaned over and whispered to me 'it's like Grey's Anatomy over there, listen to it......((the orthopods were shouting and being very dramatic))' To which I asked 'are they saving an organ donor?' he answered 'almost certainly, but lets give him one last chance'. The neurosurgeon was right, the brain was hopeless. It was the first time I'd seen a dead brain. I'll never forget it. The orthopods looked incredibly sad and disappointed when told 'you can stop now'. I can see why the anesthesiologists would want to keep that information to themselves. It might have been kinder to let the orthopds carry on.

An anesthesiologist after my own heart!