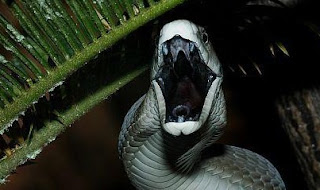 the inferior vena cava! we called it the black mamba. it lies to the right of the vertebral column. it drains all the blood from the lower extremities and the abdomen, delivering it back to the heart. when it is exposed, it has a dark blue colour. if you leave it alone, everything goes well. but if you hurt it, you are in for a whole world of trouble.

the first time i was nearly bitten was in my medical officer year. i was going to take a gunshot abdomen to theater...alone. just before, in an inspired moment, i phoned the senior just to tell him what was happening. when he heard the right transverse process of l2 had been injured by the bullet, he seemed disturbed. as i opened, he walked in. good thing he did, because the inferior vena cava (ivc) had been shot through and through at the level of the renal veins.

that was the first time i saw the ivc bleed. it's probably more accurate to say i heard it bleed. it sounded like a babbling brook. it seemed to spew blood, liters at a time. i could smell the adrenaline it caused (in the surgeon). somehow the surgeon got control and the guy made it.

then there was the time the consultant urologists pulled out a kidney for some reason. i was a senior registrar at the time. i happened to be in the vicinity (bad luck. i tried to run, but he saw me and called me into the theater). the urology consultant simply told me to scrub in. when i joined, he calmly tells me he injured the ivc. i looked under the finger of his registrar, indeed, the mamba was angry. he then told me that it was the realm of general surgery and therefore i should fix it. i could physically feel my adrenal glands go into spasm. what could i do? i fixed it, but not without much weeping and gnashing of teeth. afterwards i felt the usual parasympathetic overload after a severe sympathetic drive. i felt weak and tired.

but all the above examples are bearable in the sense that you deal with what is presented to you. not so when you are the one presenting it to yourself. a moment i wish i could forget and know i never will is when i myself nicked the mamba. and yes, boys and girls, he was angry, very angry.

without going into gory details, i cut it just above the liver where it dives behind the diaphragm to enter the heart. a word of advice, if you absolutely feel you must cut the ivc, this is pretty much the worst place to cut it.
i placed a finger over the hole, thereby stopping the bleeding. then i think i shat in my pants. seeing as i couldn't spend the rest of my life with my finger over the hole (although, i feared i might spend the rest of the patient's life with a finger over the hole) i started to repair it. step one was to call my associate to help. together we managed to get control and close the hole, but it was truly a terrifying few hours.

the point of this story is that in my line of work, occasionally (hopefully very very occasionally) you might find yourself in a situation where an action you take leads directly to harm or even death for another human being. to err is human, but when we err we can really f#@k up. i can honestly say it is a terrible and humbling realization.
Posted by Bongi at 11:11 pm

in an inspired moment, i phoned the senior
as i opened, he walked in.

An amazing save for a through and through I would think. Way to listen to your intuition on that one!

There's something very threatening about it, all right, even when quiescent: it seems to bulge in a dangerous way. Almost hate looking at it, because if you're seeing it, you're close enough to ding it. Your save was well handled.

IVC terrifies me. Black Mamba is geat moniker. Rather than audible, I'd describe the bleeding as silent and irrepressible. The entire field keeps filling up with purplish/dark blood so fast all you can hear are the whooshing noises of the suctioner as you desparately try to clear the view. It's like getting a giant hole in a boat and bailing as fast as you can but you're standing ankle deep in liquid no matter how hard you work. Hardest part is finding the injury because obtaining proximal and distal control are often compromised by anatomic constrictions (like the subdiaphragmatic IVC injury you describe). Cool post. I'm going to start using the phrase "Black Mamba" if you dont mind.

buckeye, of course you can. i think in south african anatomy books it is referred to as the black mamba already. (ok it isn't but it should be).

getting proximal and distal control where i was so bloody (i punned!!!) stupid to nick it is so to say impossible. firstly there are no valves so the blood just gushes up and down, most coming almost directly out of the heart. we grabbed the defect with a curved vascular clamp. (ok we grabbed about 90% of it. enough to decrease the bleeding a bit). then we placed a running suture under the clamp. we slipped the clamp off and tied. sounds so easy, but the open instruments were not long enough (i couldn't believe that there were no suitable instruments in the entire theater complex and i couldn't believe that this was the moment we found out) so we used laparoscopic needle holders. they were too long but we managed. terrifying is such an understatement.

Black Mamba is an infintely cooler name than Big Blue, which is what we call it. I'm bogarting it. I've never run into this, but I've heard about it so many times. Try to stitch something but it keeps tearing. Can't see. Can't keep exposures. I get nervous even thinking about it...

I was on the receiving end of such a trauma when I gave my son kidney in 2008. (It unfortunately failed and I am desperately trying to find out if what happened had any bearing on the transplant failing) This sight is the only one I have found that even mentions what can happen if this vein is cut. I appreciated the honesty as you say surgeons are human. But believe I am glad to be alive. I still wish I had another Kidney to give my son. I am still heart broken it did not work and what happened could have been the cause.