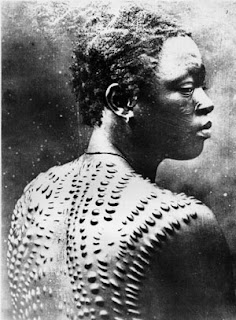 one of the aims of this blog is to touch on things specific to surgery in south africa. i notice panda is talking about 'alternative healing' so, not to be outdone, i decided to post on the same topic.

she was massive. her bmi must have been hovering around the 50 mark. then she developed severe abdominal pain, complete obstipation and vomiting. as is common, she went to her local neighbourhood sangoma. he did what sangomas do. he made cuts over the area the patient reported to be the problem (her abdomen) and smeared his muthi (in this case, apparently cow dung) into the cuts. the idea, i think, is that the medicine can get to work directly where the problem is.

but what if the problem is an umbilical hernia with strangulated bowel? due to her first being treated by our traditional colleague, by the time she turned up at our hospital, she was not well. systemically she was in septic shock and amazingly acidotic. she had a large necrotic mass over her central abdomen. at that stage the only thing that could be seen were the multiple cuts on the necrotic skin. it seemed like necrotising faciitis. there was no way of knowing that below this necrotic skin in her abundant fat lay strangulated necrotic bowel.

it was the turn of western doctors to take up the knife, like the sangoma before had done. the difference, however, was there was method to their madness. she went to theater. the necrosis was debrided, revealing the dead bowel. a resection was done. i was only a student at the time, so i was pretty far down the table. the smell also had a numbing effect on my faculties, so, to be honest, i can't remember the details of the surgery. suffice to say, an extensive debridement was done. living bowel was brought out (somewhere). and the wound was left open. she did the obligatory time in icu with multiple follow up visits to theater. after many months, she actually made it.

i sometimes look back and wonder if we really can critisize the sangoma. he did take a knife to the patient, which was the right treatment. he did have some concept of the problem having something to do with feces. i may advise that, unlike fire, feces can't be fought with feces, though. but many of the basic concepts where there, albeit in a non western format.

when reflecting on these incidents, i am always amazed by the fact that there is so much leeway given to these 'healers'. they are never made to account. they are never held responsible. they have free license to do what they want. there was even a government statement that the sangoma's 'art' cant be scrutinized like western medicine, because it is based in a belief system rather than science. the ancestors will heal you. believe it and it will be so. and when the patient finally does turn up at our doorstep at death's door (same doorstep?) when we can't actually pull them through, sometimes the sangomas will say "you see! the western doctors just kill you". no mention of the tried and tested methods of smearing feces into open wounds over strangulated bowel.
Posted by Bongi at 12:59 pm

Well written Bongi. I could almost smell the smells in that operating theater.

I do not have an answer to why people are not held accountable for anything anymore. All I do know is that this tendency can be seen throughout our society.

All anyone is concerned about is to figure out who to blame for anything that goes wrong. Once we have done that we ourselves are absolved from any accountability.

In this our country, the crime rate, hiv/aids, poverty and many other things are all laid at the door of 'apartheid' and then nothing further is done to solve the problems.

I agree with Arnold. Nothing more I can add.

apartheid is so convenient an excuse. don't get me wrong. i've said it before and i'll say it again, there is no justification for apartheid. ever. at all. but it's over. move on. face the present.

p.s, not to put too fine a point on it, but if you could even almost smell what went down in theater that day, you would be in no state to comment on this or any other blog. necrotic bowel with 3 day old fermenting feces sears something irrevocable into your psyche. maybe i should use it as an excuse for whatever i can't do from now on. no, wait, that would be apartheid. so i'm scarred for nothing!!!

I've just written (but not yet posted) on that other site of mine, a post about how, in training, medical docs would delay referral of GI bleeders, megacolon, etc, because sending them to surgery meant they'd die. So they'd wait until the patient was moribund, call surgery, and often the patient would die, to which they'd say "See?" At least they didn't rub feces and scratch in into the belly like your sangomas; so in that, we had it much better. Still, evidently some attitudes are more universal than one would think.


And once again, your stories are amanzi. I assume the picture, though, is of ceremonial rather than medicinal cuts?

sid, interesting state of affairs. i remember you mentioning something like this in your book (everyone reading this, buy the book). inn south africa, we have a slightly different situation. dare i say better. upper git bleeding is considered a surgical condition. we get them from presentation. we don't have to wait for some physician to give us the go ahead. true most we don't operate, but we do operate the needed ones in time...usually.


yes, ceremonial. the cuts above are for beautification, not treatment. the picture is random. not south african. on my post, two heads are better than one (http://other-things-amanzi.blogspot.com/2007/03/two-heads-are-better-than-one.html), if you look carefully on the second photo, you can see one set of the typical south african cuts. usually, though, there are more and they are easier to see.

It seems smearing cow dung in a wound is more of a test than a treatment. If you were well enough to handle that, you were going to make it.

amanzimtoti (schweet name by the way), maybe that would be a good name for a rock and roll band. "and now let me introduce 'fighting feces with feces!!!'" and the crowd goes wild!

No, no, no.
It's: Stained Liquor! Playing their latest song, "Fighting Feces with Feces" at the colossal Meconium Theater!

Bongi, have you submitted this or any of your other ones to the next SurgeXperience?
http://surgexperiences.wordpress.com/2007/11/02/surgexperiences-108-to-be-hosted-at-aggravated-docsurg/

Gosh, and here I thought being a plumber was the pits.

It makes me angry that still people trust sangoma's.

Especially when they take their children there!

Traditions like these are ridiculous, and goes to show that the ancestors CANT heal you. They're dead for goodness sake!!

WOW... It must be very hard to deal with this kind of stuff...

Would you get irritated if the situation had actually been made worse by not coming to you first? Or do you just "get used to it" and just work harder on your part?

I guess that when it is part of someone's tradition you can't really change a lot.

We were taught that owing to "deep spritiual beliefs", 80%of our patients present first to the Sangoma, before the hospital.
I guess we had to just get "used to it" and shake our heads at disgust that Sangomas were not held accountable for dehydrating babies by prescribing dishwashing liquid enemas and scarring corneas permanently with battery acid...
There just isn't any justice!