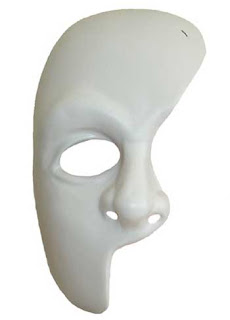 in surgery you work with what you are presented with. sometimes you simply don't have a choice but to try amazing or ridiculous things. i have mentioned my weird sh!tometer (here and here) but this is another one that scored highly.

it had apparently been growing for a few years. his caretakers elected not to take him to a hospital for medical treatment because they felt that evil doctors would use him as a guinea pig because he couldn't "think for himself". so they left it to grow. finally when the smell of this fungating rotting bleeding mass on his head disturbed their breakfast in the morning they brought him in to have it checked out. i considered telling them to eat breakfast in the lounge but i thought better of it.

the mass was about 10cm in diameter. it had infiltrated the left eye socket, causing the eye to look up, as if it was trying to get a glimpse of its tormentor. the ct scan revealed that not only was the eye socket and the eye a victim of invasion, but the mass had infiltrated his frontal lobe. i even wondered if the family had actually brought him in because of personality changes. then i realised that i would also struggle to enjoy breakfast with that mass across the table from me and, let's face it, the family weren't overly concerned by the actual well being of the patient.

the never-say-die prof of head and neck surgery immediately mustered the troops. the troops were the neurosurgeons and the plastic surgeons. to me the fact that the neurosurgeons were needed implied there would be no surgery. they tended to bail if there was any way out. i just assumed the radiotherapists would be asked to the party at the last minute. to my amazement all roll players (the neurosurgeons) agreed to give it a try and surgery was scheduled.

once all the subspecialities had played their roles and once all the knives had been laid to rest what was delivered to me in icu was, well to me at least, shocking. they had removed the mass, but along with it, the left eye and eye socket, the left parotid gland, a fair portion of the skull and more than just a sliver of the frontal lobe of the brain. the massive defect which was left was closed by the plastic surgeons using a free pectoral flap (they used his chest muscle with its overlying skin which they essentially transplanted onto the defect). the oddly misplaced muscle and skin lay on a liquid bed of cerebrospinal fluid and seemed to move in a way similar to a water bed when i touched it.

things went not so well and the family, now no doubt enjoying a daily hearty breakfast, threatened to sue for disfigurement. the irony was that the surgeons involved, whether judiciously or not, had attempted to fix what was presented to them. they did not cause the problem, but they simply tried to address it. they were like the pioneer surgeons of old who tackled massive fungating breast cancers with surgery as the only modality, because there was nothing else. these days no breast cancer and no squamous skin cancer should ever get that large and be that challenging, not only because of the obvious disturbance to an otherwise most enjoyable breakfast, but because they should present for surgical attention long before then. it is such a pity then when those very people who prevented this vent their misplaced wrath on the very people who did their best with the presented material and tried to help.
Posted by Bongi at 7:30 pm

Of course, I have the luxury of not being there, but would tissue expanders have been of any help, in hind sight? And could a cadeveric bone flap been used? I mean, since the thing had been growing for so long to begin with, do you think that the guys that went in were a little too hasty with decision making? As the saying goes, hind sight is 20/20... but, then again, it is by postulating like this that we learn, right?

No Dr B. Tissue expanders would not have been a good solution here. I saw a case similar to this as an intern. No, the risk of infection to the tissue expanders and the loss of anchored tissue (due to the fungating tumor) make tissue expanders a poor choice. The pectoralis flap or a similar one is the best option left.

Oh course, the family removed the best option by not bringing him in months earlier.

OK, thank you. Absolutely, the family removed all of the best possibilities. It is amazing to me that all over the world, people have become sue-happy for their own mistakes and oversights. It is so easy to blame someone else.

Pls don't bite my head off for askin this question, remember im stil learning.
Your description of the cancer makes it sound like it was rather extensive. Considering the extent of the cancer + lack of resources and likely long term outcome/disability, y not just opt for palliative care? In our context, should every patient be given a fair chance of competing for resources despite lack thereof, the extent of the illness and likely poor outcome. Where must we draw the line?

I think the human argument is to suggest that perhaps before diving in, so to speak, someone could have gotten the big picture of what might be the outcome, then present this to the family and ask what they wanted done, if anything at all.
At least they might have been slightly prepared for the outcome if they chose to proceed.

I'm always up for a party!

I recently came across your blog and have been reading along. I thought I would leave my first comment. I don't know what to say except that I have enjoyed reading. Nice blog. I will keep visiting this blog very often.

jade, good comment. definately not head biting off stuff. remember this was while i was still specialising and therefore by definition in an academic institution. they have a bit more leeway to try the exotic things. i actually thought the mainstay of therapy would be radiotherapy, but they felt that because it had infiltrated the brain it would be suboptimal. i forget the reason why. even the operation can be seen as palliative to an extent i suppose. who wants to die with a stinking rotting cauliflower on the head?

anyway, the point of the post is to have a go when you are presented with the bizarre. ridiculous or amazing? you be the judge.

greg, the options were discussed with the patient's family and they agreed at the time that surgery should be tried. i thought this quite ironic because if you read into the fine subtlties of my story you might get the feeling that i thought they didn't care too much for him. that people who had shown blatant disreguard for the patient were the ones to make the final decision seemed wrong in a way, but once again, that was the situation as it was presented.

walt, pity you weren't there. you might just have enjoyed the party.

That family wouldn't have been happy no matter what you'd done. They don't seem to be 'highly differentiated' to begin with. They didn't bring him in for so long because they thought you had nothing to offer him (or them for that matter), so it's not surprising that they want to sue (e.g., they want something from you). They'd have been litigious regardless of the outcome. What was the outcome? Did he survive for very long? How did he see his situation?
By the way, I've been reading your blog for ages (I think it's great), but have only now posted a comment.

Perhaps someone could sue the siblings/care(?)takers for blatant disregard of another's health and life by not seeking medical treatment until his condition became inconvenient for them. After all, they ascertain that he is retarded and therefor obviously cannot make his own rational decisions. If they indeed sued, I hope that Karma was fair to them.

Preparing patient/family for possible outcomes is a big part of the pre-op conference. I've found that you can never assume anything about what patient/family expectations will be. Explicit communication prior to scalpel time is crucial

BTW I had to do an open chole the other day on a thin girl with a history of gastroschisis. I didn't make the incision 2cm like you do, but pretty small nonetheless.... Anyway, I thought about you when I did it.

buckeye, i did an open chole at the state hospital last week (no laparoscopic equipment) but i just mannaged a 5cm cut. probably the same as yours.

I agree with MMT, that family should have been charged with negligence.

mmt, karma in south africa is dead. she was killed in a senseless act of violence. her older sister, crapma now rules supreme. crapma determines that the chance of something bad happening to you is directly proportional to how good you are.