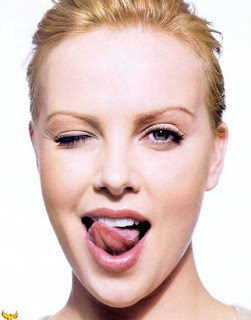 when charlize won her oscar, south africans weren't surprised that a fellow south african achieved such a great thing. what we couldn't believe was that benoni could produce anything even remotely worthwhile. having said that i actually know of the other good thing benoni produced (yes, there were only two).

when i left school, my headmaster taught me never to look down on someone who actually might still achieve something in his life. the way he did this is that he wrote me a letter. in that letter he said;
"you are a lout! your five years in this school have meant nothing and you will amount to nothing in life." just in case i didn't get the message (i think he thought i couldn't read) he wrote a letter to my father. in that letter he said;
"your son is a lout! his five years in this school have meant nothing and he will amount to nothing in life." i thought he was a sad old man who had risen as high as he ever would and he was just a headmaster. i felt sorry for him. but throughout my medical and surgical training i never looked down on someone below me on the pecking order. one day they just might surpass me.

my friend came from benoni. he was brought up there and went to school there. like any self respecting benoni boy he only just scraped through matric, probably close to the top of his class. he was lucky. at that stage the university of pretoria had a sort of remedial science course for the intellectually challenged. most of the candidates would drop out in first year. some might actually achieve a watered down degree or diploma. one or two might actually get into the mainstream bsc course and get a real degree. some say it had actually happened before. my friend managed to get into this class. i'm sure most of benoni was proud of him.

right at the beginning of the year the class mentor (not too sure what the english word for voog is) called each student to the front of the class and asked what they hoped to achieve with this opportunity. most had realistic expectations. not my friend. he stood up and said he wanted to use it to get into medicine and maybe one day do orthopaedics. the voog laughed at him in front of everyone. people in that class just didn't have the goods upstairs to go that far. in this case, however, removing the boy from benoni allowed him to come into his own and actually work for something. quite soon he was in the mainstream bsc course and then moved on to medicine where he was always close to the top of the class.

i worked with him when he was a house doctor and he was the hardest working house doctor i ever knew. he even took the occasional gunshot abdomen to theater and only called his registrar when he got stuck. i thought he was going to become a surgeon. but alas... i visited him recently in bloemfontein where he is presently half way through his orthopaedic training.

so i often think back thankfully to that letter my headmaster took time to write for me. he helped me never to look down on my juniors and never to despise small beginnings, even if they were in benoni.
Posted by Bongi at 7:37 pm

loved that one, and close to our American Thanksgiving, it seems appropriate. I love a person with gumption and stick to-it-iveness. Good on your friend.

ure awesome.. i'd be honored to scrub and assist you one day. definitely in my top 10 to do list by end of med school. (watch out for that in my blog)

I'd like to second Megan. I too love a person with gumption and stick to-it-iveness.

Bongi, I agree about not looking down on others. I was told all through childhood by a verbally abusive father that I was stupid and worthless. It took me many, many years, and many, many loving caring friends and even strangers to learn otherwise. I have been out of money and living in my car to now being financially able to give back to some of those who helped me survive both physically and mentally. I am just as cordial and respectful to the graveyard housekeeping staff as I am to the most powerful surgeon. There is definitely a pecking order in the OR and hospital, and while some want to be sure you know your spot in it, you can never underestimate another's potential. Besides, relaying kindness feels so much better than haughtiness and degradation.

as a rugby fan, im sure you realize bryan habana is also from benoni, increasing their output of good things by 50%

anon, i was not aware that habana came from benoni. i thought he went to school in kes. suppose the two are not mutually exclusive though. thanks for the information

Humility is quite a rare thing to come by in surgery. I felt quite humbled reading this.

Wasn't sure i should write this as ppl don't like 2 take about this issue but here goes.
I agree with you completely. As black female medics, some members of staff (esp but not exclusively old profs) don't expect much from us so we must work harder so they think we atleast have 2 brain cells to rub together.
Advice from older students: on that day that you get ignore/not allowed procedures/ bad racist comment/wow the prof by knowing an answer to complex question etc, you go home and cry or whatever you need to do to get over it and make sure you prove them wrong the following day. Suck it up!! No complains
Getting looked down on for things i cannot change sucks but it also motivates me to be better than expected.
Gud post by the way + intresting pic. The movie Straight Out of Benoni was FUBAR, im hoping Benoni is not ;-)

One of my classmates was from Benoni. I think she's specialising now at Wits.