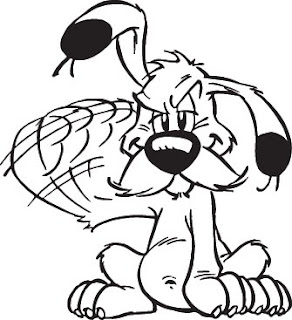 surgeons are creatures of habit. they also tend to be somewhat dogmatic. when things change they often become edgy or annoyed. however, this little fact made for a funny story once.
i was a lowly medical officer working with a senior registrar. it was a good time. i had senior cover which in those days was quite rare. also my senior was a really great guy, even though he was a surgeon. as it turned out when the time came to be rotated the prof moved us both to a new firm together. he must have assumed we didn't like each other, such was the prof's usual logic.
the new firm promised to be fun. the consultant was an old prof who no longer operated but enjoyed teaching. we would be left to do the operations without too much interference and we would get good academic input. life was sweet. we just needed to make sure we didn't annoy the old respected man. with this in mind we asked the prof's previous registrar if there was anything we needed to know about the prof in order to do everything right. he assured us there were only two things that should be dogmatically stuck to and all would be well.
firstly the prof was always exactly on time and accepted no excuses for his underlings being late. if he said rounds were to be at 07h30, then you had dam well better be there waiting for him at exactly that time. if you were busy with a resus then you should have thought of that before you allowed the patient to crash before the prof's rounds. he would not be impressed by such trivialities over his rounds. no excuse would suffice.
the next thing his registrar told us was that, after his so called grand rounds on a wednesday he would dismiss the students and invite the doctors to enjoy a cup of tea and biscuits with him. we were to supply abovementioned tea and biscuits. and, the registrar sternly warned us, the only biscuits we were permitted to supply were romany creams. apparently nothing else was good enough for the important palate of the old bull.
i was quite happy. these were easy things to do and the rotation should be a breeze. i was right. it was.
then many years later when i was the senior registrar, once again my turn came to rotate through the old prof's firm. once again i approached the incumbent registrar and once again he told me that if i'm on time and i supply romany creams for the prof's tea on a wednesday, all would go well. i was always on time and i kept a few emergency packets of romany creams ready in my locker just in case. the rotation was fabulous. the prof never said a bad word about me.
as with all good things my time with the prof soon came to an end. i was rotated into another firm and replaced by my friend and colleague. as was the habit of all of us my friend approached me to get the low down on how to stay on the prof's good side. it was obvious throughout the department that the prof was actually fond of me (well as fond as a surgical prof can be). i told him the secret. it was so simple, be on time and supply romany creams. my colleague should do well too, i thought.
about a week later, during the prof's post grand round tea party, i wandered in to the tea room. i was astounded to see an assortment of biscuits on the table. i was even more amazed to see that none of them were romany creams. had my friend lost his mind? had he decided to ignore my advice? was he tired of life? i didn't know. i left in possibly too much of a hurry.
the next day i went to my friend and asked what the hell was going on? why had he totally disregarded my advice that i knew had been passed down faithfully from registrar to registrar at least since five years previously and probably even longer? he told me.
"well, bongi, on day one i told the prof that i was told he like romany creams so much and i asked him why. he replied that he actually didn't like them at all and had been wondering for some time why his registrars always gave them to him. it didn't bother him too much so he just left it."
i couldn't help laughing. this piece of erroneous information had been passed down faithfully over possibly eons from one registrar to the next without anyone ever bothering to check with the prof to find out if it was in fact so. i could just imagine how it had all started in times gone by, maybe just after the mesolithic era. the prof had casually taken a bite out of a romany cream and made a comment that it wasn't half bad or something equally moderate. the registrar of the day probably looked up from his stone surgical tool and remarked "uhgh!" as he made a mental note to remember what he assumed was the prof's favorite biscuit. and thus he started possibly the single longest untested erroneous surgical fact of all time.
p.s it is true that you must be on time though.
Posted by Bongi at 6:03 pm

I love this story, as it illustrates brilliantly the mentality that goes on everywhere a group of people work together and individuals come and go regularly. I have witnessed similar situations, where the wisdom get passed down, old member to new member, but no one can actually tell you the reason for a given action. Like the monkeys, the bananas and the water spray story, I guess.

great post, bongi! made me laugh here this morning. i don't know what romany biscuits are, though. are they available in the states? at any rate, thank you for a great, skillfully told story.

hope this finds you well, my friend.

Great story! Clearly demonstrates it good to think outside the box... question rituals ..ask questions ..because what if?

Of course ..he also could've raised the question .."Why?", but i guess he was either being polite and/or amused. :)