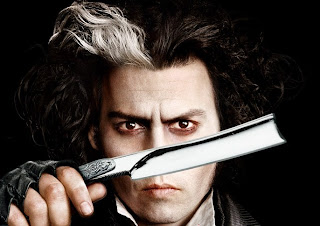 some versions of history claim that surgeons and barbers stem from a common pool. that is apparently the reason the british still refer to their surgeons as mister rather than doctor. i personally even used to believe this, but then something interesting happened which changed my mind forever.

sometimes a theater list can fall apart. sometimes some patients just neglect to turn up, sometimes anaesthetists cancel patients and sometimes the blood results preclude theater as an option. it is seldom that the powers that be conspire together for a total collapse of the list but it did once happen. when we got to theater we discovered that every single patient had fallen from the list for one reason or the other. the anaesthetist looked delighted. we were not. and yet it put us in the interesting situation of having the morning off. we weren't sure what one did with a morning off. i had been thinking about a haircut for a while and suggested we head down the road to a nearby barber. i remember my good friend and medical officer (whom we affectionately thought of as the ninja because of his amazing martial arts ability) suggesting that we go to a modern hairdresser, but i would have none of it. i told him i wasn't the type to fork out a whole wad of cash for a fancy haircut when someone who historically was linked to our noble profession could do it at a fraction of the price. the ninja looked at me as if i was mad. then he remembered i was and offered to come with me.

quite soon we were parking the car outside the barber shop. it was so early in the morning that they had just opened their doors and didn't have any customers yet. truth be told, i had often driven past them and i had never seen a customer there. it seemed to me such a pity that our brothers, the barber-surgeons were being driven out of their profession by fancy hair dressers and i for one was proud to support them.

the doors stood wide open so we walked in. there was no one there. we sort of stood around for a while but still no one came to our aid. the ninja was looking at me with this i-told-you-so smile which just made me all the more determined to stick it out. then i saw a bell on the counter. i picked it up with maybe too much of a show and rang it in ninja's face. he scowled but remained silent.

the bell had its desired effect. from an almost hidden door at the back someone entered. immediately the ninja's scowl turned to a broad smile. in fact i think it was a chuckle. the man who had entered was one of the oldest men i had ever seen. he moved slowly with a shuffling motion towards us and asked in a thin voice if he could be of assistance. he also spoke with a strange accent. the only thing fast about him was the noticeable tremor of his hands. they seemed to shake so much i couldn't imagine him picking up a pair of scissors, let alone working with them. i turned to leave but i walked right into the beaming face of the ninja.

"what are you waiting for, bongi?" he grinned. "you are the one who insisted on coming here, what, with stories of the common bond we share with grandpa here. lets see you go through with your convictions now." i was stuck. i considered fighting my way past him, but he was not the ninja for nothing. i was done for.

what could i do? i sat down in the chair. i think i more crumpled up into the chair in a defeated heap but i tried to make it look like i was sitting down. the old man threw a towel around my shoulders. it only took him five attempts to get it right. he then fixed the clasp securely around my neck. it felt like jail bars closing in on me. i was truly stuck. in the mirror i could see the ninja now openly laughing. i wished i could wipe that smug smile off his face, but i was using all my energy to try to prevent an expression of terror creeping across my own face.

the old man then shuffled off towards the door from which he had emerged. he shouted to the back. for a moment i felt a sense of relief. he was calling for someone else to take up the tools of our mutual trade. i was going to be ok and the laugh would be on the ninja for doubting his all knowing senior.

i was just practising my smug smile to use on the ninja when the person the old man was calling finally emerged from the doorway. imagine my shock and horror when i looked upon the face of what had to be the old man's grandfather.
Posted by Bongi at 9:34 pm

lq2m and wondering how the haircut turned out. :)

Obviously you lived to tell the tale, but still, were any vital organs damaged?

My late step-grandfather was a barber for 50-odd years. When I first met my husband, he loyally got Granddad to cut his hair. One day when we visited, we noticed several nicks on Granddad's face. Grammy told us that he was struggling to shave with his open razor nowadays what with him not being able to see very much anymore. I confess I chuckled when hubby's next haircut was at the barber's in town. And the following one ...

jabulani i think i might have known your late step grandfather. did he work in a barber shop in pretoria?

Bongi, no. He only ever got as far south as North Africa and Italy, then shrapnel curtailed his travels. Guess you'll have to blame those nicks on someone else then ... :)

What Ramona said- we need pictures of the haircut!

Pffft purplesque, good luck with that ... pictures of Bongi are scarcer than pictures of me!!

I remember that barber shop. I honestly believed that I was their sole patron until I read this post. I would sit back and let the old man nibble away at my retreating hairline, happy to see that he had even less hair then me. I would look at the faded old pictures of Cuba and share a nostalgic fantasy of getting my haircut in the hayday of a Havana I had never been to.

One day I entered and an old man sat withered in a corner, motionless. Then suddenly a sprightly young 40 something female "hair dresser" appeared and asked how I would like my hair styled today. I was too shocked to run for the door so I let her "style" my few hairs and attempt small talk. She chatted about modern things like telephones and automobiles and she new all the new names of countries like Zimbabwe.
I felt as if I had picked up my favourite old classic novel and somebody had replaced it with a contemporary Disneyfied version.
All the while the old man sat motionless. I missed his wordless laboured breathing. He missed his business partner and times forgotten. I was painfully reminded that change, and death come for us all.

After that, I never returned to Cuba or that barber shop.

Thank you for your blog, Bongi.

Writing without capital letters, is that a choice of style? It's very hard to read.

Don't be lazy, USE CAPITAL LETTERS !!!

anonymous, when reading it just try not to pronounce the capitals. then it is easier to read. that's what i do when i write it.

Anonymous: it's like spotting spelling mistakes...simply overlook them and it becomes easy ;)

I've stumbled upon your blog by chance, Mr.Bongi,and have been reading this blog for wuite a while. And I have totally no regret for that.

Thank you for your blog, Bongi.