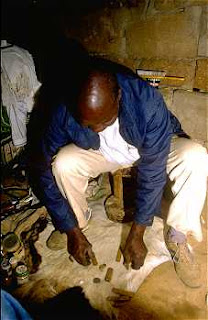 just a quick update on my last entry about the gunshot wound. well, remember i said the spleen was enlarged and looked abnormal? because of that i decided to send it away for histology, thinking we might incidentally discover some underlying pathology, not that it would really change things. so we popped it into a bucket full of formalin. my medical officer filled in the relevant forms, requesting histology on it. the next day i was informed the spleen was stolen out of theater!!!! i kid you not!!! someone stole the spleen. now although we have no way of proving this, it is generally believed by all the staff at the hospital that it was stolen to be used by a sangoma (traditional healer or witch doctor. i use the word healer in the very loosest sense)
this now raises a number of questions with me. firstly, being totally untrained in their 'craft' i'm not sure what the therapeutic use of a spleen is. do the therapeutic properties change if the spleen came from a good man or a bad man, or must you just adjust the dose of spleen given? and what about the very real hiv risk in our country, or does one just mix the spleen with garlic and beetroot? (this being our minister of health's answer to the aids pandemic)
my next real concern is about the effect of the formalin on the healing properties of spleen. our man's spleen lay in formalin for some time. i suspect the average spleen used by a sangoma does not. have they done the necessary double blind studies to compare the therapeutic value of formalinised vs unformalinised spleen and where can one read this data?? there are so many such questions.
the next thing that i was later told, although, admittedly not necessarily from a reliable source, is what happened at the scene of the shooting before the man was taken to our hospital. apparently the paramedics initially only worked on the other guy (he was shot through his brachial artery and the bleeding probably looked more impressive) and just left my patient lying there. they only attended to him once the other guy had been packaged off to hospital. he was give plenty of time to move into the dangerous territory of shock. once they got him dripped and ready to transport, they apparently had to further wait for a police escort, seeing as though he was under arrest for attempted murder. this information explains slightly more why he did so badly with us. he didn't experience the benefits of the so called golden hour. he didn't even really get a bronze hour. maybe he got a lead hour.
now although this might be some sort of street justice metered out by the paramedics, i was pretty annoyed when i heard this. i don't think it is our role to play judge, jury and executioner. we don't know what happened. we should all do our best to do our job and save the man if we can. i also feel that we at the hospital mounted a great effort to save him at great cost, totally unaware our efforts had been sabotaged from the outset.
then again, maybe the other man was given priority because his on the scene injuries were more severe and my anger is unjustified. so if i have offended any hard working caring paramedics, i apologise. if i have offended any sangomas, i do not.
Posted by Bongi at 4:07 pm

Email ThisBlogThis!Share to TwitterShare to FacebookShare to Pinterest
Labels: sangoma

What were the race and visible class indicators of A&B. Inspite of what you say earlier, (as I recall) that being hospitalised in private vs public health facilities did not affect the survival chances of either, I am having difficulty believing this fully...
For example, what was Mr Private Health Care wearing at the scene of the scrime, what kind of car did he drie, and the same for B...
Did the paramedics look at B and thik "tsotsi", bandit, carjacker, thief... making stereotypical class assumptions that affected their moral judgements. Looking at the rich light skinned or white guy they may have subconsciously thought: "This man's life is worth something, let us do our best to keep him alive".
Regarding the spleen, I think someone threw it out, and couldnt own up. I am having difficulty believing your local Sangomas don't have standards - I am sure even novice sangomas are aware that formalin-marinated spleen is not what the ancestors had in mind.

Hi.
I love your blog! I am going to put a link to it on mine! Such a beautiful country South Africa is....I've been there twice. I loved George and the Wilderness...

amy, the paramedics definitely looked at my patient and thought tsotsi, but this was because the security guard told them his version of events. i was not there on the scene so the race and class breakdown i do not know. i'll guess the security guard was black (statistical probability). the rest i do not know. in this country your chance of being admitted in a private hospital is dependent on one thing and one thing only. if you have medical aid. most people with medical aid have their cards on their person at all times, exactly because without it you're likely to be taken to a state hospital.

the spleen was nicely packaged in its marked container with formalin. later the container was found, opened with only blood stained formalin. all the black theater staff unanimously say it was stollen for muthi (nguni word meaning tree or medicine). trained theater staff do not throw things away that are thustly packaged. a cleaner would have thrown it all away, not leaving the formalin.

sangoma remedies i have personally seen include;- shoe pollish on open wounds, coffee paste on open wounds, ground up lp records to induce labour, cow dung smeared into cuts over a strangulated hernia (this woman developed a necrotic abdominal wall as well as necrotic bowel and came pretty close to developing an entire necrotic body),melted plastic inhallations for tb, hepatotoxic herbal remedies (this beautiful 4 year old child died), rectal perforations from enemas given through cow horns (quite common). i don't think formalin and its uses are part of the sangoma course.

even if the novice sangoma is quite clued up, i doubt the ancestors have the slightest clue what they are doing.

cliff, thank you for your comment about my blog.

yes south africa is wonderful and i love it. george and the wilderness area are stunning. next time try to get to the lowveld. it is vastly different to the coastal areas where you were but also breathtakingly beautiful. a little more like the stereotypical view of africa as portrayed on movies etc.

However, you might remember something I witnessed that involved much more obviously unethical decision making. When we stopped for the homeless guy run over on the highway to Pretoria, and despite repeatedly phoning the ambulance services, and Sunninghill hospital being only 5 minutes away, it still took nearly 40 minutes for a paramedic to arrive, and he did so without an ambulance and with his wife and kids in the car. My gripe is not with the paramedics, but with the whole system that allowed a seriously injured guy to suffer on the road for so long. I strongly suspect would have received attention within 10 minutes if he appeared of a better class. If everyone has to wait that long, I'm glad I don't live in South Africa.

All my wife and I could do was talk to the guy, assure him that help was on its way, and try to convince him to not stand up (which was far from possible since both legs were so badly broken, they were literally flopping around).

One striking memory I have of this event was when, after half and hour had passed, my wife spoke to the vultures (tow-truck drivers), and asked them if they had also phoned the paramedics, and they said no, they just assumed the guy was dead....

Another amazing look into your surreal world. I remain in awe.

Amy: If the paramedics had decided to take a 'smoke-break' and sat around chatting while the injured 'B' lay there, then you have an argument, but if they had limited resources (more likely), had to focus their attentions on one or the other, then they had to make a judgment call, and the most sensible judgment call is to use probability-based reasoning: Even if they couldn't KNOW B wasn't a tsotsi, or whatever, they would HAVE TO go with what's on average most likely. And that's not just perfectly sensible, but the best course of action. What do you suggest, that they always flip a coin and just randomly decide? In most cases they'd end up focusing more resources on actual tsotsis than actual victims, meaning more dead innocent victims.

Maybe they did sit around allowing what 'looked like' a tsotsi to vrek, but we can't know that, personally I doubt it, and if not, sorry, but they made the right call.