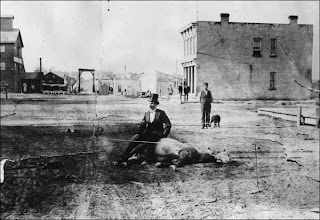 i know that i've already blogged about this toppic but something happened this week that made me think about it again. for those of you who feel i'm flogging a dead horse, i apologise prophylactically.
this man well into his fifties presented to our hospital with a week's history of no stools or flatus, severely distended and tender abdomen and vomiting fecaloid material. our friends in first world countries are probably already asking why take so long to present. in our setting this is not too unusual and there are a myriad of reasons why he may have taken so long to get to us, including transport problems and the like. however in this man's case, he has been under his local sangoma's treatment for the entire week and had only sought more conventional treatment when it became clear there was no improvement.
his entire abdomen was covered in small parallel cuts, more than i have ever seen on one patient. this is the usual sign of the involvement of our traditional colleagues. often you can even get an idea if possible pathology by the location and spread of the cuts. well healed cuts for example in the right hypochondrium may indicate previous cholecystitis. this man had multiple symmetric cuts over his entire abdomen. they were also very recently administered (correct word???), so i knew his pain was intense and diffuse. who says that sangomas are not helpfull.
anyway, we operated the man. he had a colon cancer of the descending colon with total obstruction. he also had an incompetent ileocecal valve which is why he had been vomiting. he had a mixed small bowel large bowel obstruction picture. we did a resection and pulled out a colostomy of the proximal massively dilated colon.
a few thoughts, firstly when i first saw this man in casualties i chatted to him a bit about his visits to the sangoma. please don't assume i was condescending and condemning. i was not. the man was feeling sick enough without some bombastic surgeon giving him the once over. i just enquired. the main thing i enquired about is how much did he pay for these cuts on his abdomen that in the end did nothing to either treat or even diagnose his cancer, complicated by obstruction. the answer astounded me. he told me he forked out R1000 to his friendly neighbourhood sangoma. that's probably more than i would get for the operation i did, had i done it in private (as it is i will get not one cent for the operation due to wage disputes in our health depatrment at the moment which i have alluded to in previous blogs) he paid what i consider a large amount of money!! and we're not speaking about the type of person who can afford it. he was not a well off man. he's just the average poor state patient. our state health system is very nearly free for him (he had to pay R26 for his admission and operation and all post operative care), yet he went to get small cuts on his abdomen at an unaffordable cost that didn't even work. the sangoma couldn't even recognise real pathology and refer. (he was not referred by the sangoma although i have seen that happen before) but the sangoma did take the money.
next thing. the point of responsibility. in our country you can't sue a sangoma for missing a diagnosis because it's viewed somewhat in the line of faith healing. the patient didn't have the faith and was therefore not healed. he would have to sue himself. they are free to go on and do whatever without ever being called to account. very comfortable.
the one thing i must admit, the mode of treatment wasn't totally off. i too took a knife to the patient, as did the sangoma. i just cut much deeper and did a few things inside. so maybe i'm also a traditional doctor. i heal with natural substances found in nature......like cold hard steel!
Posted by Bongi at 12:06 pm

What a world! In this respect, yours is not entirely unique: I once saw the wife of a chiropracter, whose back pain he'd manipulated into paraplegia due to metastatic (and obvious) breast cancer. At that point I concluded he wasn't a complete charlatan, in that (I'd assume) he must have believed in what he was doing.

By the way, I just put up a post for you.

Great post. SA is such an incredible place, in both its beauty and its horror.

From an admiring med student who wants to do what you do.

thanks red. yes i love south africa. i try not to put too much emphasis on the horror, but rather all the good things (despite how my blog comes across)

point of note; my name is bongi, not amanzi. lq2m