what's in a name? 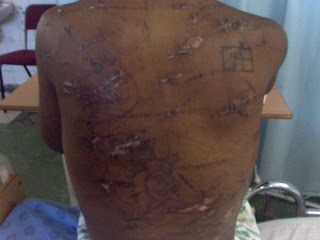 when i was still studying i heard a story about one of the surgical candidated from up north who totally messed up a question in his final exam. candidates from other african countries sometimes write exams in south africa. the exams are usually for registration as a surgeon in their own country and only limited registration in ours. this means they are easier than the average final here. the question that floored him was to discuss sjambok syndrome in its totality. i thought that a very reasonable and even easy question. the only problem is that candidate was not a south african and had absolutely no idea what sjambok syndrome is. he simply wrote on the paper in bold clear letters; 'i have never heard of sjambok syndrome.' i would have just left it blank if i were him.
rhabdomyolysis, also known in the literature as crush syndrome and known in south africa as sjambok syndrome, has a very specific profile here. but before i get to that, a quick word on the sjambok (http://en.wikipedia.org/wiki/Sjambok). the sjambok is a whip made from hippo hide. hippo hide can be up to 6cm thick so you can imagine the resultant whip. it is about a meter ling and fairly rigid. it can be bent, but springs back to its origional form. rhabdomyolysis is when enough muscle tissue is dammaged to release enough breakdown products to override the kidney's ability to clear them, thereby causing kidney failure.
so in south africa, we get our rhabdomyolysis not from getting crushed under walls or gravel or cars or whatever, but rather from getting the crap beaten out of us with sjamboks. and who does the beating and who gets beaten? the community does the beating as a sort of community justice when someone is caught doing something undesirable. when i saw my first sjambok syndrome as a doctor i asked the guy what he had done wrong. his answer, an answer given by every single sjambok syndrome patient i've ever treated was that they got the wrong guy and accused him of something he didn't do. that time, when i asked the accompanying police officer (by the time they get to hospital they are usually under arrest) what he had done, i was told the father of a ten year old girl had actually caught the guy in the act of raping his daughter.
as time went on i could judge the severity of the crime by the severity and spread of the injuries. the worst i saw was a guy who had no part of skin on his entire body spared, including the soles of his feet and the palms of his hands. he was apparently caught sodomising an infant. the one pictured above was caught stealling so he was only beaten on his back. it is interesting to note the prison tattoo on his right shoulder (maybe a blog for the future). sometimes if the victim was very drunk, the beating would be mainly around the head, often with intracranial pathology to boot (even often caused by a boot). then the experienced doctor looks at the number of defence injuries on his forearms. a total absence of defence wounds means severe intoxication at the time of the beating. the greater the number of defence wounds the more sober the victim. and a general spread of wounds with fair sparing of the head indicates a sober person.
the interesting question that arises is my personal feelings about this sort of barbaric behaviour. i do not agree with it. but.... in a country where crime is totally out of control and the powers that be do nothing for whatever reason and after hearing the numerous henious acts commited by these people, i can't say that my heart is filled with pity for them. i suppose that means that to some extent my environment has changed me. that is something i'll have to look at in myself.
but anyway, what's in a name? that which we call sjambok syndrome by any other name would sting as sharp.
Posted by Bongi at 4:20 pm

And now another amazing post, a window into your world which is so different from mine. Your world seems so much more connected to reality than mine: life as it is before it gets homogenized and capitalized.

In case you don't get back there, I left a response to your comment: 10 cm is considered "mini" by many. Also, I never tried tying in such a small and deep hole; indeed it would be hard. Guess I'd use a deBakey instead of my fingers for running the knot. I feel like sending you a clip applier and a bunch of clips.

And if I were true to my inclinations, I'd come there to watch you work!

I agree with Dr Schwab. He and I may be from different sides of the Atlantic, but your blog touches both of us in the same way.

Sjambok Syndrome? Whoa. We've never heard of it over here as well. Bit harsh of the examiners not to include its common name, wasn't it? Still, what with the UK's medical system going to the dogs, I suppose we'd better start reading up, as more and more of our doctors emigrate.

Oh, and "intracranial pathology to boot (even often caused by a boot)"? Brilliant wordplay.

A quote from veterinarian Sheldon Gerstenfeld: "When I took my Florida veterinary license boards, a slide of a toad was one of the 'name it and the problem it causes' questions. Since I had come from a northern veterinary school, I assumed that this was either so unimportant that it was never taught me or I had considered it so irrelevant that I never stored it in my memory." Well actually, the toad Bufo marinus, an alien species introduced to southern Florida, is a very common cause of severe illness and potentially death in dogs in that state. Perhaps the take-home message is, if you're taking a license examination somewhere away from where you had your training, try to find a colleague who also moved to the new area and ask them what uniquely local phenomena and terminology they've had to pick up.

sid, you're quite welcome to visit. i'll give you a crash course in not getting killed in south africa. not sure i'd feel comfotrable with you watching me operate though. lq2m

angry, many south african doctors are moving there too. it seems doctors move to other countries.

Seriously? South African docs ar moving to the UK? I suppose it's always been a trend, but it's due to change. The government has just imposed strict racist rules on immigrating doctors preventing them from practising here beyond a period of 2 years.

Ah well. I hear the weather's quite pleasant in Australia anyways :)

Oh, and you have a kickass blog. I've added you to my links. Hope you don't mind the heading I've given you :)

View from the Trekant said...

I thought a sjambok (or fimbo I think is another word for it) was made from the dried penis of a hippo.

I have no idea where the hell I got that from. Probably some bad novel from the 1980s.