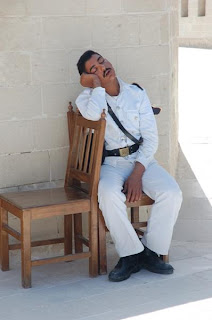 sometimes when people hear how little sleep a surgeon sometimes functions on they tend to be surprised. actually it is not a problem if you are operating. during an operation all your faculties are at their sharpest. there is no chance of dropping off, as it were, into an open abdomen. to assist is an altogether different story.

by the time you actually get to operating yourself you would have put in quite a number of hours assisting. the difference between operating and assisting is vast. as i've said during an operation you are totally alert, no matter how little sleep you have had. while assisting, you could easily become distracted and may tend to doze off if you are not fully rested. i have spent many long hours late at night or in the ungodly early morning hours holding some retractor in an abdomen while my senior sewed up what seemed to me to be vast tracts of bowel and i have often heard his irritated voice telling me to retract correctly moments before i probably would have fallen unconscious into the open abdomen. basically put, i know what it is like to assist at these hours and just because i'm fully into the operation does not mean i don't have sympathy with my poor assistants.

however there was one unique assistant. i was still junior but i remember him well. he was not a surgeon at heart so he didn't even have the exhilaration of experiencing open surgery to keep him awake, despite his physiology crying out for sleep. he quickly nodded off with the slightest quiet moaning of his physiology. but he had a unique talent.

this house doctor (that is what he was), while assisting, would push his feet up against the table, lock his knees, hook the retractors into the wound, throw his head back and go to sleep. the weight of his torso pulling indirectly on the retractors gave better exposure than he was ever capable of doing awake.

yes there were times when theater was eerily silent in the wee hours in the fear that the assistant would be woken up, making the operation so much more difficult.
Posted by Bongi at 1:38 am

I can clearly see your "assistant". LOL

I wish I could develop this skill for some of the school Governors' meetings I have to attend. If they are evening meetings, about half-way thru (an hour), I start wriggling and squirming and doing mind exercises to keep my head from falling nose first onto my laptop keyboard. I have visions of doing so, then coming round to find a message on my screen saying "You have performed a fatal error" and a dozen pairs of eyes glaring at me whilst tutting like a Skippy convention!! That really would be a fatal error ... ;)

Many times I napped, leaning back on the retractor. It's a light doze, but enormously therapeutic. All the more so when the case is a fat person where the surgeon is working at the bottom of a deep hole, so it's not like you were able to see what he was doing anyway...

Absolutely classic!!!
I can just picture it now. I used to be a theatre nurse before I became a paramedic and if I was not needed to be the scrub nurse, I was regularly asked to be the first assistant if there was no house officer around. I wish I had that talent ( and a surgeon as understanding as you) for the hours spent cutting through adhesions !!
Great post.

hahahaha!! Now i get why we are forced to do medical physics in 1st year, he clearly paid attention.
I'll confess to having stalked a surgeon's theatre late at night so he could let me assist, it was all very comical.

o funny...was he a keen yachtsman?

In the laparoscopic era this is more difficult: as a junior resident I remember once falling asleep holding the camera! Talk about immediate betrayal!