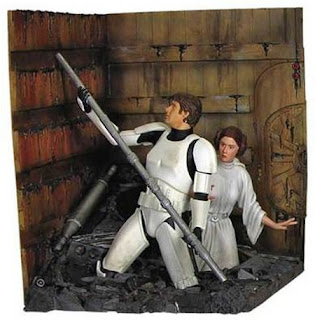 a comment on my previous post by undead doctor, reminded me of another story about a lift in the old academic building in the old hospital.

every morning all the registrars, medical officers and interns in the surgery department would meet in the boss' office for a report on the previous night's activities and to deal with whatever other administration had to be taken care of. after this meeting the day's work would begin. the surgery department was on the seventh floor of the academic building. the lifts in that building were fairly small, so we did what any normal surgeon-type would have done in our situation...we tried to see exactly how many people we could cram into the lifts on the way back down after the meeting. as it turns out the lifts couldn't take more than thirteen. i know this from the time we crammed fourteen into one lift and it got stuck between floor three and floor four.

now the mental image you need to create here is of fourteen bodies crammed into a space that can comfortably accommodate about six people. it was the sort of situation where we could not all breathe in at the same time because there was simply not enough space for everyone's thoraxes to expand simultaneously. also it was hot, very hot. quite soon the metal walls showed small drops of water from the combined evaporation of our bodies. i would like to say it was not too comfortable, but that somehow just doesn't convey quite how we felt.

to be honest, the first minute was quite fun, with one or two people making jokes about the fact that pretty much the entire surgery department had been wiped out. it was not the ideal time for a bus accident to come into casualties. after the first minute, however, the next eighty nine or so minutes (for that is about how long we spent in that lift together) somehow were not quite as much of a laugh.

one of the interns, it turned out, suffered severely from claustrophobia and had only gotten into the lift in the first place because he didn't want his registrar to think he was weak. after that there was not too much pretence left. his registrar got to see him cry, drop to the floor and call for his mother.

i had a leatherman which someone used to pry the door open about one inch. the above mentioned intern pushed his face up against this tiny window on freedom and started to hyperventilate even more than he had up to that point. i suggested we allow the doors to close again, hoping it would allow the lift to resume its normal activities and hopefully stop on the correct floor and permit the doors to open normally. after that suggestion something happened to me that had never happened before or since...the intern started shouting at me hysterically, even taking the effort to call me a few derogatory names. i could not hit him. my arms were pinned to my sides by the mass of humanity. besides, i assumed outside that lift he would quickly become normal again. i decided to leave it at that.

after about an hour and a half i decided to push my theory once more. i moved slowly towards the doors. it was surprisingly easy..the combined sweat acted as a lubricant and we slid against each other in what i can only describe as an amoeba-like fashion. i moved right up to the intern who was on his knees with his nose pushed through the gap in the doors doing all he could to drop his carbon dioxide partial pressures. with one hand i grabbed my leatherman wedged between the doors. i placed the other on his head. in one movement i yanked the leatherman out and pulled his nose out from between the doors. the doors closed. at that moment the intern got to his feet in one smooth amoebic action. his face was in my face and his eyes glazed over with hatred. i prepared to defend myself, but almost expected a phagocytotic attack. how does one defend against phagocytosis?

then there was a jolt. the doors having been allowed to close sent some signal to the great engines of the lift (not great enough to handle fourteen people mind you) and it jumped into action. five seconds later it arrived on the correct floor and the doors swung fully open. the intern rolled out. the tears of rage turned suddenly to tears of joy. everything he had said to me was immediately forgotten by him. it took me slightly longer.

other than very hot and mildly dehydrated we were mostly none the worse for wear.
Posted by Bongi at 11:59 am

Wow! Glad I don't have a similar story to tell.

"i prepared to defend myself, but almost expected a phagocytotic attack. how does one defend against phagocytosis?"

Now that I see where you live and work I understand your comment on StorytellERdoc to me. I didn't much elaborate my comments but be assured I did need to be seen. You would need to know my eye history though to know that. Nice blog, good story...ciao