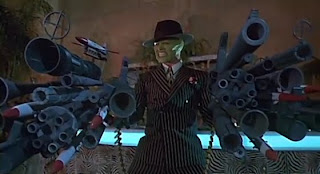 being south african these days sometimes means we see things in a slightly skewed way. it seems to be the way we have become. i have touched on this before, but there is another story which illustrates the point.

the recent run of hijackings were fresh in all our minds because the perpetrators had shot and killed, execution style, a mother and her three year old child just the previous week. there were reports that one specific gang was working the area and were responsible for most if not all the hijackings and associated killings in the area. so when our patient came in, even before the police told us so, we just assumed he was one of this gang.

the story was the police had intercepted this guy just after he had relieved a car owner of his mode of transport. he was good enough not to kill the victim this time around which was nice. however, not being the law abiding type, he had driven off in haste with the police hot on his tail. according to the police he fired first. whatever the truth was, bullets were moving liberally in both directions between our man and the law as they flew through the streets of pretoria in a westerly direction. unfortunately for the hijacker he had chosen the toll route and was forced to stop at the toll gate just outside kalafong hospital. he jumped out and opened fire on the cops in the now multiple cars pursuing him. they shot back. they hit him four times. they gave me real reason for concern about the aim of our police force. the only wound which was anything more than a flesh wound was the shot to his left brachial artery (the main artery in the upper arm).

ironically, the patient had comitted his initial crime in the drainage area of pretoria academic hospital, a place with a dedicated vascular unit, but had fled into the drainage area of kalafong hospital that had no vascular service at all. i thought this would have been divine justice, but, alas, his proximity to kalafong at the time of the shooting along with the fact that his shooters, the police, immediately transported him to the nearest hospital ensured that he had prompt help. the fact that my friend and colleague on call that night just happened to have a knack with vascular surgery also swung the odds heavily in the favour of our patient. obviously my views about karma were once again confirmed.
and so the next day when we went on rounds the patient was actually doing quite well. he sat up, looking at us as we stood around his bed to discuss his case. his ordeal had done nothing to his smooth mouth and arrogant attitude. in fact, the only sign of his life saving and arm saving operation in the dead of night was the large fasciotomy running along the length of his forearm (essentially a long open wound along the length of his forearm) and the police escort that lazily sat next to his bed.
my friend, the guy who had essentially saved the patient's life and limb, felt the pulse. i thought he would be proud of its strong beat, but there was something else on his mind.
"the police of today don't know how to shoot!" he said. "they shoot kak!" i think this was aimed at whoever wanted to listen. but the next statement was specifically for the patient. he turned to the patient and continued.
"i, however don't shoot that badly. if you come near me or mine, be warned i'll kill you on the spot. my bullet won't just take out some artery. i'll hit you in your heart and you won't see another sunrise. just to let you know." i'm not even sure the patient knew this was the very person who had given up his night's rest to meticulously repair the artery and thereby save the patient's life. i don't think he was the type to care, actually.
two days later, before the fasciotomy could be closed, the patient escaped from the hospital while his police escort lay lazily around. i reflected that all we could really hope for was that his open wounds would turn septic and he would succumb to systemic sepsis. we all knew he was too bad a man for that to happen.
Posted by Bongi at 11:00 pm

Your last line is completely true. Everyone knows that tsotsi's and taxi drivers never die!

My comment was regarding the truth of your last line, but doc-z beat me to it.

It's hard for a Canadian ex-pat in the Republic of Ireland to imagine having such violence in my environment. I am always truly amazed and gobsmacked by what you have to see in your jobs in S.A.

Damn...great post. What the hell is that lazy security guy doing now? Hopefully, his car is still safe.

Best of luck to you all.

This is the kind of post that shocks me the most. We wouldn't dare say that to a patient here, and it isn't that we aren't adequately provoked. For instance, I can remember a case about a 18 months ago of a shaken baby: 5-week-old baby with 3 subdural haematomas of varying ages and degrees of bleeding, 2 frontal, 1 occipital. In other words, the baby was shaken repeatedly. The parents had a ridicules story, and the entire medical team (pediatrics, neurosurgery, forensic medicine etc) wanted nothing to do with them. The baby was all we cared about. The parents were never spoken to alone, always as a team, and the bare minimum was said. I am not saying that your friend did anything wrong. To the contrary, I find his comments refreshing. I am sure that some choice words could have been said to these parents, but we didn't dare. The cultural differences between SA and Europe are sometimes very surprising. It is more than just the level of ambient violence that you are faced with. I think that there might be a frankness in the SA psyche that isn't in other countries.

if you dont like nursing car tsosti`s then you can come and work in my new clinic. It is state of the art. I just bring in an HIV negative peasant, laparoscopically remove their kidney and transplant it into a needy middle eastern from places like Dubai or Abu-dabi. There is lots of demand for such a service. My theater and ICU is scrupulously clean, i only employ the best nurses and get the doctors to take out important things like central lines. I would never be as unscrupulous as to remove both kidneys. I pay well in US DOLLARS. My clinic is in an old farm house near the Limpopo. people think it is just a hunting farm, but its state of the art. lots of willing zimbabweans come in. over the river (if they are lucky to miss the crocodiles). they then go on to louis trickard and buy televisions and return over the river with t.v.s balanced on their heads. I worry their last kidney might get Bilhazia though. Can you take out a kidney or do i need a urologist?

I take my last comment back: South Africans aren't necessarily more disinhibited than others. On further thought, I think it is just your exposure to violence. If we were seeing 3 shaken babies a day, everyday, the filter between our brains and our mouths would also be thinner. I am sure we would have choice words too. In my defense though, you have written posts in the past regarding your desensitization to violence and your threshold to confrontation.

beit, what you are describing sounds frighteningly like organ trafficking.