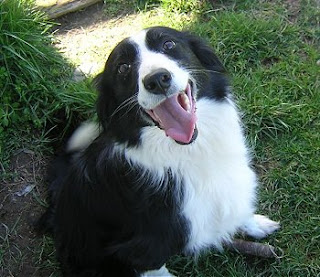 many years ago a friend of mine told me a story which i thought quite touching. it seems like a nice way to kick off the year.
one of my seniors in surgery had a dog that meant a lot to him. he lavished it with love and attention and they were inseparable. he had trained the dog to obey him implicitly. in fact it was so well trained that he would often go for walks with it without a leash. one word from him and the dog would stick to his leg like glue. this was one of those walks.
my friend and his best friend were out walking. it was a quiet day so my friend would send his dog out far ahead. he would then shout the command for it to stop and wait. he would then either leisurely catch up to the dog or give the command for it to return to him. then he sent the dog ahead again, but this time didn't notice the dog would be crossing a street. as the dog was half way across the street my friend saw a truck barreling down at full speed towards the dog. he panicked and, instead of shouting for the dog to return, just screamed the dog's name. the dog stopped dead in his tracks, right in the middle of the street...and was run down.
soon the dog was at the vet. most of the injuries were to the leg, but they were bad. so bad in fact that the vet said only an amputation would suffice. she then added that this breed of dog didn't do too well with an amputation because they needed to run around a lot or they became depressed and lost the will to live. she suggested euthanasia. my friend was devastated, but he agreed that the dog would not do well without a leg. he consented.
just before the injection he went through to his faithful old friend to say goodbye, but when the dog looked up at him and, despite the pain wagged its tail and smiled he knew he could not just stand by. he asked the vet if she could anaesthetise the dog. he would do the rest. he then drove to the hospital where he was training, walked into theater and pretty much stole all the orthopaedic plates and screws he thought he would need. not too long afterwards he was drilling and hammering and doing the things bone doctors do, but on his dog. somehow he got it all together, although he had to sacrifice the articulation of the wrist. a stiff wrist was better than no wrist.
and so the dog recovered and went on to have a full and happy dog life.
p.s i'm not condoning the stealing of all the hardware but when i confronted him about that he pointed out that the hospital had refused to pay him overtime well in excess of the value of the items stolen and, he said, he could therefore live with it.

That is awesome. I know someone who took their rabbit into ED and had it sutured up after a cat had a go. A full orthopod job is even better (and the fact that the patient did well is better still).

Great story! I've got a soft spot for the pooch population as well, having had a most faithful Collie for many years.

I had to do some vet med in the arctic from time to time...trying to creatively sign out meperidine and make splints out of popsicle sticks for a Pomeranian with two broken legs once was interesting. Turns out you can make a great muzzle using kling gauze around the snout!

Love the story! This dog looks like a border collie. They are the smartest and most loyal dogs and will do anything to please their human companion. I miss my border collie. Glad this one had a good medical ending. Happy New Year, Bongi

oh god no!!! put the dog down and get ANOTHER ONE!!!! i live in the uk and they are doing hip replacements on dogs now. what next? colostomy bags? tracheostomies? the slipperly slope ect ect. I always knew orthopods are not the sharpest scaple in the draw............but i thought Bonji was a general surgeon of the old school. i always liked to imagine Bongi as a fabulous surgeon in the boer war.........pushing forward the fronteers of science, coping with people who have had their hands chewed off by crocodiles ect. but instead we get this Milli-mollie-mandi like story.

Is that your dog in the picture?

What a beautiful dog! Happy New year Bongi. Its friggin cold here in Ireland at the mo.

A heart-warming story...a happy new year to you Bongi :)
-candylo

Happy New Year. That was a wonderful story.

sir percy, interestingly enough i actually agree with you on many levels.

firstly i personally am not overly sympathetic with dogs. i am not a dog person. however the dog meant a lot to my friend and there is a surgical connection. he too is a general surgeon so he was out of his field. i think he did well.

but i do have a few questions about your comment. i would also like to think of myself as a boer war type surgeon, but i would be on the boer side. then your name. i assume it's from the south african sir percy fitzpatrick who wrote the book jock of the bushveld? i wonder why you chose that name seeing that he was a dog person. after all he is known for his book about a dog. also the title sir he got in the boer war which you refer to for his efforts against the boer republics. in my book, although he wrote a good story that still translates into tourism revenue for the lowveld, he was numbered among the enemy. just interesting.

but your point is well received. i wouldn't personally have gone to the trouble of operating the dog.

Only shows how love can pressure anyone to see things differently... it changes everything.

scns that is an excellent point. the dog meant a whole lot to him and therefore he did the less logical thing. i personally think we are often more alive and maybe even more human when we follow our hearts and not our minds. i admire him for doing it.

still, i wouldn't have bothered myself.

i did 6 amputations today.

have you got any swine flu down in the lowvelt? i am telling you its nasty nasty. mind you so is peanut allergy

Hey Bongi! Great post...if that's not the definition of devotion and love, I don't know what is. WE got our first family dog 3 years ago...and now I get it. She's part of our family.

What a wonderful story- glad to read the happy ending.

I have to say I understand his sentiment.

2 years ago, we'd just got new kittens, one for each of my children. My son (a gentle and sensitive soul) was immediately wrapped up with his. We'd only had them 6 weeks when, 4 days before Christmas, the wretched kitten broke its femur...how, we still don't know but we think he was playing with the garland at the top of the stairs, fell through the gap in the stairs rails and landed on the banister immediately beneath. It was a hideous break running obliquely from hip to knee. It had to be pinned and the kitten had to be immobilised for 2 months.

Now, ordinarily I would've said Ag, just put the thing down, afterall it's only an animal. More importantly, for the first time EVER in my life I'd not insured something!!! However, I couldn't do that to my son. He loved that kitten; his whole world was wrapped up in that kitten and there was no way I was going to destroy his world 4 days before Christmas. So I put aside my better judgement and followed my heart. When we collected the cat after surgery, I didn't even want to know what the bill was, I just handed over my credit card. And do you know what? That cat has been worth every penny of the £1,346 it cost to fix him. He is a beautiful cat ... in fact, I'm going to go and write a blog about him! Thank you for the reminder.