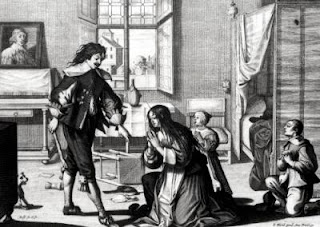 a while ago i treated a woman with rhabdomyolysis. you see her husband beat her so severely that she had enough muscle injured that she ran the risk of kidney damage due to breakdown products. i spent some time chatting to her. i couldn't understand that this beautiful intelligent woman could find herself in this sort of situation, especially seeing that the bastard had assaulted her twice before. but actually this post isn't about her. she had finally realised there is no chance that this sort of person is going to change and that she needs to leave him before he kills her. no, this post is about someone else.

it was when i was rotating through the military hospital. she came in as a gunshot wound patient. actually she was quite lucky (as lucky as one can be called when one ends up with a surgeon i suppose). her wound was to the chest and a simple intercostal drain was all she needed. a bit of recovery time and she'd be fit to go. then the story came out.
you see she was in an abusive relationship and was no stranger to the hospital's trauma unit. but each time she went back for more. this time, however, her partner came home with a gun. there was an alcohol fueled argument during which the gun was produced and he threatened to kill her. she grabbed their infant child and ran. however, like most of our patients, she couldn't outrun a speeding bullet. the bullet went straight through her chest and into the infant's arm, shattering his humerus.

to say i was shocked is somewhat of an understatement. i mean i can accept that if someone has such self destructive behaviour that they continue to put themselves in harm's way in the end it is their choice. but the infant has no choice. i needed to say something.

i asked her if she had made a case with the police. apparently she hadn't. i wanted to know why. well according to her the man involved was actually a good man. he had visited her in the hospital and confessed his undying love to her. all was forgiven. she was going to go back to him with her child.

now please understand me. i know that i can't judge someone until i've walked a mile in her shoes and other such cute sayings. but i wasn't thinking about her. i was thinking about the child whose security had already allowed him to take a bullet to the arm and was gearing up to subject him to more of the same. that little bit of tact that i do have left me.

"you know there is a good chance he kills you or your child next time. actually i'm not concerned for you. if you want to put your life in danger, you're a big girl and that is your choice. but that baby of yours has no say in the matter. the one person who is supposed to protect him it seems is willing to put his life on the line because some psychopath says he loves you. let me tell you, people don't shoot people they love."

i said a few other things but the gist was the same. not one word penetrated. she was determined. apparently prince charming had pulled the wool (or executioner's hood??) over her eyes and she was going back. i felt despair for the baby.
Posted by Bongi at 11:30 pm

Sad, the choices made in the name of "love"

Most times I am bamboozled by the decisions some folk make. Sometimes not even a mile in another's shoes enables understanding.

It always amazes me how far things go where you are. How you can deal with it all emotionally? IDK.

People certainly die here as well in domestic cases but there are laws that promote early intervention by automating police and child welfare actions (removal of child to protective custody, as the mother would most likely be deemed incapable of care) It would legally be my responsibility to initiate this cascade.

A study from the trauma unit in the hospital I'm working at showed that most paediatric NAIs (non-accidental injuries) occur when parents use their child as a shield against a violent partner (most of them claim that they thought the partner would desist when faced with the child).

Ah, yes, Valentine's Day. Painful read.
I think people do hear. Maybe just a few words. Once in a blue moon it will make a difference to someone down the line.
But what if all they are able to take from it, is that one person stopped what he was doing and showed concern or compassion for their or their child's welfare? I should hope it would in some way matter to them.

It is one of the most frustrating things to be a witness to. They are damaged people themselves; they will return to the cycle time and time again. Very sad.

Hi Bongi,
Reading your posts since before I started in SA and the experiences are so familiar... It's incredeble and incredebly sad how people treat their own lives and that of others...

I tried to get a taste of your experiences and wanted to get into PAH. unfortunately i come from The Netherlands...so no residency permit (despite being married to a SA 'boeremeisie ;-)' ). Also had the support of Prof B. but alas...
Worked 2 years in Boksburg, now back in Europe.
Anyway: great stories boet! Dis baie lekker om jou stories te lees as jy weet wat aangaan in Hospitale. Eks hartseer eks nie meer da nie.

If a bullet in her babies arm doesn't open her eyes then nothing will.

I remember feeling the same way after spending 2h cataloging every bruise, bite, and scratch on a woman's body one night when she decided she'd "had enough" and wanted to press charges.

Came back to the clinic the next day and told me to shred the notes in the chart because she'd changed her mind.

That's really a terrible story. Its hard to see why people stay in this situation. In the US this would have been a mandatory reporting to Child Protective Services and the child would have been taken away from the home if the mother was unwilling to move out with him/her. Sometimes I think mandatory reporting laws aren't right, but in this case it would be right on.

david, glad to hear. pity about the boksburg gig. could be worse. on second thought it probably couldn't. ek hoop jou boeremeisie hou jou in toom.

albino, i hope you didn't shred a thing. her denial doesn't mean it didn't happen.

nicholas here we are required by law to report this sort of thing either to social services or the police. the police in this country are totally useless for a number of reasons. social services are swamped. in the end nothing will happen and the child will grow up in an abusive environment to become the next generation's hijackers and murderers. we in south africa like to call this the circle of life.

but in all seriousness, we did report it to both the police and social services. nothing happened. we all went home and prayed the world would become a better place.

I used to work as a sexual assault nurse examiner so I respect the legality of the chart.

I feel a pain deep in my throat reading this post. How sad, so very sad. I have found your blog not too long ago, and I really like your writing.