recently i went to germany for a laparoscopic course. it was great fun. among other things i saw snow for the first time. this caused me to spend the night at hamburg airport after being snowed in with a few south african colleagues and drinking whisky mixed with freshly fallen snow out of paper cups. then we caught a train to frankfurt to fly back to sunny south africa. it was great!!! but there was another story which i got a chuckle out of. us south africans are truly a unique brand.

after a long day listening to a german professor who was totally devoid of a sense of humour (and we did try to elicit one) we all decided to go out for a bit of enteral feeding (and drinking of course). we found a quaint little place under a building somewhere which was at least warm (did i mention germany was the coldest place i have ever been!!). also they had german beer which they served directly out of a wooden barrel. it was the only time i have seen a german barrel of laughs actually. so we were essentially in what we viewed as heaven and as the barrels came rolling out full and quickly returned empty our already festive mood just got better.

quite some time into the night when we were all feeling pretty good, a lady came around in what i assume was some sort of german traditional dress selling a new brand of shooter that she was promoting. she quickly ascertained that we couldn't speak german when we replied to her overly friendly supplications with blank stares (we were all conversing in afrikaans) but seemed relieved to discover that we were all pretty fluent in english, as was she. she sang her song again.

"how much?" asked my one colleague.

"two euro" she replied with a plastic smile.

"i'll give you five rand." now two euro, when exchanged for south african currency, translates into about twenty rand, so, five rand was clearly not going to be enough. we wondered if this artificial german barmaid would have any idea what a rand was and where it came from. we were surprised.

"no! five rand is not enough." she replied with what we were learning was a standard german sense of humour. "you may all be surprised to hear this but i have actually been to south africa and i know what five rand is worth. so do you want one or not?" she said sternly.

"sure. i'll take one." said my friend. he took a shooter off her tray and threw it back. he then handed her a coin. she seemed to be interested to hear what he thought of it. i think she was actually hoping to sell a few more shooters to a group that clearly at least didn't have a moral objection to the occasional drink. we all watched for a verdict. finally one of us asked (in afrikaans of course) what he thought of it.

"nie te kak nie. maar dink net hoe verbaas gaan sy wees as sy agterkom ek het wel vir haar 'n vyf rand stuk gegee.*" we all fell about laughing uncontrollably. she stood there with a quizzical look, oblivious to our joke, which, with the effects of the social lubricant, in our minds, made it all the more hilarious. were essentially lost to her. she turned and left with she sounds of our mirth no doubt driving her away. 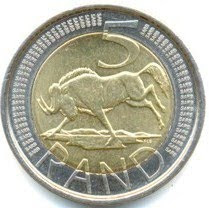 as i discovered later when looking at the two coins, they were similar enough in design that in a dark german bar and if you were feeling particularly annoyed by a bunch of foreign slightly tipsy surgeons it would be quite easy to mistake one for the other.


* not too bad but just imagine how surprised she is going to be when she discovers i did in fact give her a five rand coin.
Posted by Bongi at 9:03 pm

Hilarious! It appeals to my Anglo-German sense of Schadenfreude.
Germans have a sense of humor, it's just not funny is all. It's dark and mean. It makes English humor seem slap stick and silly.
How was the course by the way?

anne, i enjoyed the course. of course i clashed with the professor, but i can't help it that he was wrong!!!

that night at the airport and the train trip in the early morning through so many miles of snow was amazing. for a nelspruit sprog like myself to see so much freshly fallen snow for mile upon mile upon mile was breathtaking.

it was a great experience all in all.

anonymous, i rather thought the story was more about the serendipitous coming together of circumstances more or less based on the coincidental similarity of the two coins. i also think it had something to do with finding humour in things. sometimes things are just funny.

although strictly speaking we were tourists (although of an academic nature), we were far from wealthy, but that really is besides the point. also soon after this incident the lady did check the coin and came back demanding the right money which she got. in the end she actually had a bit of a giggle too, so no harm was done. i didn't put that in the initial story because i felt it didn't contribute to the humour of it.

in the end, as i mentioned, it was all the more funny to us because of our level on inebriation so in the end it was actually us that were the foolish looking ones. i would prefer you laugh at us than chide us.

however i see i offended you a bit with the story. i think this blog is full of things that can be viewed as offensive or insensitive that i find humour in and to a certain degree that is what this blog is about. however i'm sorry the story offended.

also i think the humour has more to do with the conflict of cutures. i live in a country with many indigenous groups, all with their unique sensitivities. the interactions between different cultural groups give me a lot to laugh at even if there is offence taken by the one group or the other.

i suppose sometimes here we probably need to laugh otherwise we would cry.

but anyway, thanks for the comment. i meant no shadenfreude to anyone. the concept doesn't exist in the afrikaans culture. we are a bit more of the live and let live variety.

She asked if your friend would like a shooter, not if he would buy a drink, so literally speaking, he was expressing the affirmative answer by tasting the drink.

But perhaps that is a too legalistic view to debate so late at night.

In most european airports you need a 2 euro coin to get a trolley. Arriving from SA, one seldom finds exchanges before baggage claims. So out of desperation we realised that the good old 5 rand coin works just as well!