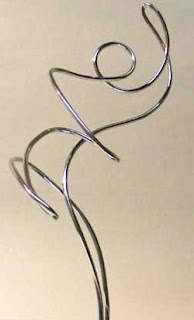 probably my favourite operation is a laparoscopic nissen fundoplication. it is a mixture of intricate dissection and technical skills. and probably my favourite part of a nissen is the laparoscopic knot tying. it's just fun and i am usually quite good at it. yet recently while i was doing a particularly difficult nissen with a massive hernia, when i got to about the sixth knot, somehow i just couldn't seem to throw a laparoscopic knot anymore. it gave the assistants a bit of a laugh and a window to tease me a bit. i too had a good laugh, took a moment, and the problem was gone. the rest of the operation was no problem. but i couldn't help reminiscing about another knot tying incident from the old days.

surgeons generally tie knots with only one hand, their left hand. it is a fairly easy skill to learn and yet it is poorly taught. i remember when some registrar tried to teach it to me when i was still a medical student. he sort of took my hands and positioned the fingers as if they were made of wire and would just bend into any position he chose. he then started twisting the fingers into ever increasingly strange contortions as he shouted:-
"now you do this and then you do this and then you do this!" interspersed with "not like that, idiot!" each time my hands didn't immediately fall into the position he demanded them to be in. when i finally got it right by sheer chance i wasn't entirely sure of the correct sequence of d0-this-es to be able to repeat it.

so when i became a registrar in surgery and i was required to teach students how to do the elusive surgical knot i sat down and formulated a way of explaining the steps using words other than 'do this' and 'do that' and without grabbing their hands and forcing their fingers into strange contortions. i then simplified the steps so that even if the student's hands forgot how to do the knot, when they went home they would be able to go through the steps again and reteach themselves to do it. and i had great success. even the most ten-thumbed students could sort of throw a knot after going through my steps.

then one fine day swimmer's chest and i were doing a laparotomy together and i decided to show my good friend, swimmers chest, my surefire way of teaching the knot. of course it wouldn't count if i simply tied with my trusty left hand so i decided to use my right hand for the demonstration. i set up for the knot, explaining the steps. but just as i was about to throw the first knot, the boss walked in to check how things were going. my wrong hand (the right hand) was set up to do the knot so i thought i'd better just get on with it. yet with the boss breathing down my neck and the initial point to tying the knot with my right hand being gone, i somehow floundered. the boss was (k)not one to let such an opportunity slip by. he immediately knotted onto the fact that i was struggling. he leaned in and focused his entire attention on my hands. i needed to get his attention off me. i asked the sister for a needle holder so i could tie with an instrument rather than with my hands. the boss was quick to respond.

"no no no no no bongi. use your hands." i grabbed the suture, but by this time the hands were shaking. i went back to my trusty left hand but as i set up everything just fell apart. the boss' eyes seemed to burn holes into my finders and it felt like so many years ago when the registrar twisted my fingers to their heart's content. swimmer's chest looked at me in amazement. he leaned across and laughingly asked,

"bongi, what's wrong with your hands? why have they gone all stupid?"

"swimmer's chest, here is the suture. i seem to not be on form today. you do the rest." but the boss would have none of it

"no! bongi will continue and throw the knots until the operation is finished."

and so i struggled through the last few sutures that needed to be thrown with the boss' disapproving glare and swimmer's chest trying not hard enough not to laugh.

still to this day when swimmer's chest and i get together he rags me about the day my hands suddenly became dumb and i forgot how to tie knots.
Posted by Bongi at 10:07 pm

How comforting to know surgeon's are (k)not perfect. Neither are cake-makers for that matter. Recently I wanted to make a cake with several wires of pulled-blossoms. I assembled all the bits and pieces to make them, pulled off a piece of paste and started to ply it. After a couple of minutes, I suddenly realised I couldn't remember how to do the flowers. And I couldn't remember which of my cake-making books the instructions were in. So I abandoned the wire and went for something I DID remember - moulded flowers!

"How comforting to know surgeon's are (k)not perfect."