see one, do one, teach one 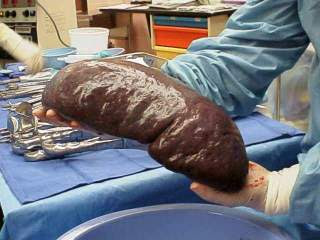 i was a first year registrar. the senior guy was in the month of his finals and therefore, due to a new concession from the department, he did not have to do calls (only for that one month). therefore his calls were evenly divided between the other registrars. i was the most junior. the medical officer (a year done in surgery before your training officially begins) in the firm was to handle the call. i would only be required if there were problems. i was essentially only one year her senior. i've already mentioned the fact that i was used to being thrown in the deep end, so i was ok with it.

early in the evening, she (the medical officer) phoned and told me about a blunt abdominal trauma patient. the spleen was dammaged and she was going to theater. i told her to call if there were problems. she phoned before the incision, asking me to join her. i was surprised, but i went in.

i let her open. i was going to assist. she hesitantly got into the abdomen...eventually. it was full of blood. she stood back and asked me to take over. once again i was surprised. i stepped up. the spleen was severely ruptured and oozing quite convincingly. the medical officer immediately said-
"i'm so glad you're here. i've only ever seen two splenectomies and done none." i considered telling her that i'd never in my life even seen a splenectomy, but decided she seemed to be in enough of a flat spin without that morsel of information. i had been surprised by her twice. twice was enough. i simply realised she did not have the heart of a surgeon. i couldn't blame her. it is not for everyone.

so i did the splenectomy. (when i was a medical officer in a firm without a registrar due to an overall lack of them, my consultant, in an attempt to not have to come out in the middle of the night when he was on call, had given me a quick lecture on all-you-can-expect-to-see-on-call-and-how-to-handle-it-without-calling-me. in this lecture he had dedicated about 10 minutes to how to whip out a spleen for dummies. i was a dummy so i felt fully equipped).

where was i? oh yes. so i did the splenectomy. the medical officer on a number of occasions repeated that this was above her and that she was so glad i was there. she spurred me on to get that spleen out in double quick time. after all i wasn't sure i could endure her thanking me one more time.

the spleen removed and the patient saved, i left. i figured she could close. (i'll save dehiscence for another day)

so they say see one, do one, teach one, but i sometimes look back and wonder if they really intended you to do all of that in the same procedure.

Email ThisBlogThis!Share to TwitterShare to FacebookShare to Pinterest
Labels: deep end, do one, ruptured spleen, see one, splenectomy, surgical training, teach one

My goodness. Is that the spleen of an elephant?

How funny that you had to lead her through the procedure. Too much blood perhaps? Is she still operating?

human spleen. not the one the post is about obviously, but a pretty cool photo a friend gave me. here pathology is magnified quite often. take a look at:-
http://other-things-amanzi.blogspot.com/2007/03/two-heads-are-better-than-one.html

the reason that she couldn't go on with the operation had to do with the fact that she didn't believe in herself. in that sort of situation, you as the surgeon will either save the patient's life of f#k up and the patient dies. she didn't believe that when it came down to the wire she was going to be able to do it. that's why i said she didn't have the heart of a surgeon. surgeons have to be confident in their ability to redirect traffic coming from the fan that has just been hit.

this confidence sometimes overflows into arrogance,, but often it is actually simply mistaken for arrogance.

p.s, as the small print says she became a gynae. their course is much shorter than ours and they don't have to do the mo year, so she actually qualified before me.

Sorry, I missed the fine print on first read...

bongi, ever had a splenic abcess? That's the only surgery I ever felt "faint" in, though it could have been the flu I had at the time. Still, the smell was unforgettable!

buckeye, i also think she made the right decision. but there is so much more to it. it has to do with training. the old ways vs the new. what it takes to become a surgeon.. who is being protected by limited work weeks (doctor or patients) etc. i have noticed that whenever one of us comments on a blog about this sort of thing, the younguns cry "old boy's club" and disreguard what we say. somehow i think it is more complex than that. suffice to say, she didn't have what it takes and therefore i wish her well in whatever other line she chooses. but these days, who does?

Well, I'm glad I checked out your stuff. Honestly I hadn't read it before, because I like following the rules (as best I know) of grammar and punctuation. However, I will make an exception for you. Nice stuff. I wish I had been there; we would have fought!

why would we have fought? i don't like fighting.

Because I would have wanted to be right in there with you.

I used the very same picture in my spleen post. I'm glad we have the same taste.

I said in my book, with enough bananas you could train a monkey to take out an ovary; so I guess she should be all right.

The sink or swim approach seems to have worked out fine with you. Had I been in that situation in my first year, I can't say whether I'd have been more like her, or you. "Sedeach." Maybe that should be the term for see, do, teach all at once.

Bongi, where are you my friend? Vacation or something otherwise enjoyable I hope. Hope that all is well...

I hope you put all this (your blog) into a book sometime. I'll buy it, keep for rereads. I love your flat-out honesty, the unexpected humorous turn of phrase, etc. Should I ever need surgery I hope for a surgeon such as yourself.

anon, thank you very much for your comments. why buy the book when you can read it here for free?

I reckon if I had have managed to make the call on ruptured spleen, I would want to take it out. But it is a hard call. We don't stand by the see-one-do-one-teach-one rule in Aus, but it is not prohibited. Usually, supervising surgeons are more nervous than that!

I think it is ok to say you don't feel up to doing something. Not everyone would be able to take out the first ruptured spleen they saw. But the non-surgeon thing was to reiterate how out of her depth she was. If you aren't confident enough, then you should at least want to be.