sometimes we as surgeons are restricted by the most mundane of things. back in my kalafong days, more often than my first world visitors could imagine, entire theater lists would get canceled because of lack of theater attire (scrubs). this gave rise to a funny story and, indirectly to a more recent and somewhat more serious story.

story one.
i arrived in theater one morning in kalafong, ready and eager to operate. there were no theater pants, only tops. i quickly found out there were none available and the matron was on the verge of canceling my list. i checked my gas monkey (anaesthetist). he got one of the last pairs and was dressed for action. the sister was also appropriately attired. it was just me that couldn't enter the theater complex.

not to be blocked by such a minor thing, which was anyway an administrative error and therefore, i reasoned, should not disrupt theater lists, i made a plan. i took a sterile drape and wrapped it around my waist like a sarong and strutted out into theater.

my fashion statement it would seem was too much for the matron, because before i had made even 5 meters, she came rushing up to me with a clean pair of theater pants (she had apparently just created them from subatomic particles using a process of fusion) and insisted i go back to the change room to make myself decent. no fashion sense it seems.

the second story was more recently.
i was called to the theater at the local provincial hospital in the early hours of the morning. it seems they started a laparotomy for a gunshot abdomen and were now in deep water. i dived into my car (i reasoned i would soon be diving into their deep water with them and i wanted to get my eye in) and raced to the hospital, trying to fully wake myself up as i went. i parked and charged to theater.

there i encountered obstacle number one. the change room door was locked. no problem, i would just go in through the main door.

obstacle number two was the main theater doors had been locked using a piece of wood wedged through the door handles. i shouted into theater, but there was no reply. i reflected that, although they had called me in at some ungodly (but not unsurgical) hour, they had not allowed easy access. the telephone call had lead me to believe that the situation was critical. i could not let a mere locked door get in my way. i broke it down. inside i found one of the sisters sound asleep. my supplications to open the door as well as my violent attack on said door had, luckily, not disturbed her no doubt well deserved rest.

obstacle number three awaited me in the change room. there were no shirts. at this stage i was feeling slightly less than my usual cheery self. i was in no mood to waste more time. i dressed in theater pants and entered theater with a naked torso.


there was stunned silence. the medical officer was speechless. he started explaining his operative dilemma, but as he looked up and saw me he went quiet. if i wasn't in such a bad mood i'm sure i would have laughed. i started scrubbing. (i suppose i should say something like my godlike torso faintly illuminated by the one light in the scrub room, but that is implied, of course). 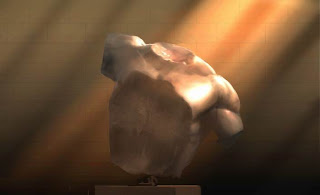 soon i was donned with the operating gown and got to work. no longer blinded with jealousy, no doubt, the medical officer found his voice again and could explain to me the situation. my mood also improved and soon the normal intraoperative banter was being exchanged as if it wasn't 3o'clock in the morning and as if the consultant hadn't just turned up half naked after breaking down the theater door and of course as if there wasn't someone whose life hung in the balance.
Posted by Bongi at 12:23 pm

Too bad they took away your sarong. Those who wear them say kilts are also quite liberating...

I once arrived at a freestanding surgicenter to find the front door locked, and all the side ones as well. Lacking a key, I went round to where the OR was, and started tossing small rocks at the window, which was at least 8 feet off the ground, preventing me from seeing in or the people therein to see out. It failed to gain attention, so I took off my shoes which allowed me to wedge a few toes into a tiny ledge and grab onto a brick or two and raise up to window level for a brief few seconds. After a moment of terror (already begun by the hearing of the rocks and wondering what they meant) at seeing a face pass up and then out of view, the nurse realized who it was and sent someone to let me in. Eventually, they gave me a key.

Even as a nonsurgeon, as much as I've gone to the hospital in the middle of the night, hate being awakened, getting dressed, trying to focus on dark, dimly lit objects driving down the road, once you get to the hospital there is a suspension of time, where time doesn't matter since you're away from the daytime nuisances and divided commitments, because the reason you came in is your only commitment that you can devote all of your attention to, and it feels good.

Hilarious! If theater attire stands between me getting the operation I need or not, you may operate on me in the buff for all I care. Just make sure I don't wake up too soon!

So very funny! we are short of scrubs all the time and that is 'actionable intelligence'

I enjoy your blog so much (and your comments on other blogs). Thank you for writing it!

Heehee... We used to love it when theatre ran out of clothes as it meant one thing for us: a nice long cup of tea at klinikala

little karen, i thought you were going to say it meant you get to see me in a sarong.

Had a good laugh with all your adventures. You make me think of Dr. House (Fox TV series). i can only imagine him doing this sort of things.

You should have walked in completely naked. "I got here as soon as I could!"

i was ever so slightly surprised to see me referred to as a female on the link from grand rounds over at emergency medicine. no folks, i am in fact male.

and let me assure my regular readers that every word of the above story is true, except possibly the matron making the pants out of subatomic particles. that i can't really substantiate.

Thats awesome. The theatre nurses used to talk about hiding all the scrubs when a certain male registrar was on (him being of greater than average attractiveness), but never got round to it. Don't think he was South African though..