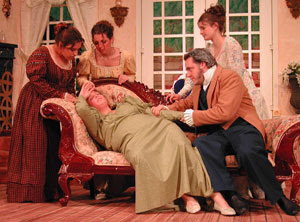 there was a funny story that happened in our university many years ago. apparently even true.

our university, according to the head of the department of surgery, is the only university in the world where the final year registrar actually has to perform an operation as part of his final exam. (when i told this to my cuban friends, they informed me that they also operate as part of their exam, so this interesting fact is no fact at all.) among the junior registrars in the department it is considered a great honour to be asked to assist in this auspicious operation.

in this particular case, the candidate had to do a thyroidectomy. he elected to use two assistants. if you can, why not. he asked two of the medical officers in the department to assist him, something that was almost unheard of. i can imagine that many registrars felt snubbed. but in all fairness, both medical officers were pretty serious about continuing their surgical training and were both apparently capable assistants.

the great and nerve racking day finally arrived. the candidate and one assistant started the operation. the second was a bit late. apparently he became engaged in the wards and couldn't free himself until the operation was in full swing. but he finally joined, somewhat out of breath, but otherwise, it seemed, none the worse for wear.

then the professors entered. to fully appreciate the tension of the situation, imagine, over the normal stress of a thyroidectomy for a registrar, adding the presence of three professors and a senior consultant, watching his every move and being more than slightly liberal with their criticism. in the theater was the head of department, the previous head of department (semi retired), the preprevious (is that a word?) head of department (an old style surgeon who was as old as the hills and, it was rumoured that you actually had to cut off his head before he would die. i think a stake through the heart might have sufficed) and the most senior consultant in the department. the mood was grave. the only talking at all was when the registrar fielded the array of difficult questions about the procedure he was doing and constantly had to defend every decision he made as well as every stroke of his blade.

and thus the operation progressed, probably a lot slower than it would have had he been alone. around this time, so the story goes, one of the assistants became progressively more pale. finally his face was chalky gray and a cold sweat had broken out on his forehead. some versions say he then promptly passed out. others have him excusing himself from the operation and quietly collapsing in the corner of theater. whichever you believe, imagine the medical officer, with a serious ambition of one day becoming a surgeon, lying crumpled up in the corner with the entire hierarchy of the department looking down (in more ways than one) on him. some would call this a career limiting move.

anyway the operation then progressed, with only one assistant, to a satisfactory end. the professors apparently hounded the candidate somewhat less. they had the collapsed assistant to pester and therefore their attentions were divided.

post script, after this somewhat embarrassing episode, i never fainted in theater again.
Posted by Bongi at 2:54 pm

So did you really faint? or was it planned so you could distract the profs?

I, fortunately, have never fainted. I remember the first surgery I ever scrubbed in on, as a third year student. It was a gangrenous, diabetic foot. I know the surgery residents were waiting for me to do so. I earned a small amount of respect by not.

Once, while doing a hernia repair, I noticed my scrub nurse/assistant leaning unusually close. (Doing hernias, I had no assistant other than the scrub. This one was a mostly retired old hand, about 75, who now worked at a surgery center and would only work with me and an orthopod she liked.) As she leaned closer and closer -- at first I thought she'd seen something amiss -- I realized she was going down. I reached over the patient and his open wound and managed to grab her arm enough to ease her to the floor, where, fortunately, she eventually awoke.

As a second year med student, I passed out in a chair while watching a mole removal. Not one of my proudest moments.

As a med student, I worked private shifts at night to help pay for my studies so I often assisted registrars while sleep deprived. I remember leaning into the surgical field eyes closed and awaking to a sharp reprimand from the observing prof who had already caught me napping during one of his lectures that week.

But the time I needed to excuse myself for feeling ill was during a debridement of a necrotising fasciitis arm that looked worse than a prop from a teen slasher flick! Freddy Kueger would have fainted!

i have yet to faint in the limited surgical procedures i witnessed or assisted in (thyroidectomy, gastrectomy). im thinking necrotising pancreatitis might actually do it for me. i hope not!! any tips, seniors? i heard them say nv go into OT with an empty stomach?

"....you actually had to cut off his head before he would die. i think a steak through the heart might have sufficed"

I guess the steak should be a stake.

And now I'm stuck with the image of a vampire in scrubs with prime beef embedded in his chest. LOL!

rl,i did not pass out!!! i excused myself from the operation and quietly collapsed in the corner of theater. not done on purpose.

buckeye, i was also not overly proud of this episode. makes for a good story though.

jeff, if i can give you advice, if you absolutely insist on passing out (or collapsing in the corner) try to do it when there are not three profs and one senior consultant present in the theater.

but seriously, jeff, i actually went the other way. i stopped eating breakfast and conditioned myself to not pass out even on an empty stomach. that way, if i missed a meal, which does happen quite a lot, it would pose no problem.

anon, thank you for the correction. i have edited the correct spelling into the post. but you must admit, the survival rate for transplanting a piece of meat into the heart can't be too high.

From the "anonyme" above:

Sorry, I did not want to be a spelling-nazi, it was just so funny an image that I almost spluttered coffee on my screen. And I'm at work...

advice noted.
u might read on my blog next year during my gen surg rotations about my experiences.

hope u wont be reading a "bongi told me to not eat and i did not, it ended up with me fainting in front of the chief of surgery, the chief registrar, the intern in charge, and all the staff nurses, an experience i will never forget" account

seriously i will try it.

About the only near-problems I've had are the OMG stench moments in certain circumstances. One quickly learns the value of mouth-breathing.

I have yet to faint in the OR but I have major control issues so I refuse to give in! I have become light-headed during laparoscopic procedures. This seems to be a fairly common experience. I have seen two surgeons who have had to step away from the field for a moment and it has always been during a laparoscopy. You stare at the monitor and your field of vision narrows and the edges become fuzzy. I've learned to look away from the screen and look at something across the room (if possible without moving the camera) or speak to someone if this happens. But the best advice I've ever had is "Don't forget to breathe"

Ok, this makes me feel better.

I actually posted a fainting blog today as well!

ive never fainted, but i swear, i have nightmares at least once a week of being in a particularly gruesome operation and collapsing like a sack of wet flour. its coming, i can feel it.

I'm an intern of medicine (that means last year of college) here in Chile.

I did my surgery rotation a few months ago. A friend of mine who was assisting the chief of surgery in the hospital in a hernia operation, fainted. That's right, fainted just in front of all the OR staff. Another friend, who was doing anesthesia rotation and was there, took him immediately a quick glucose test. He had like 40 mg/dl.

I don't know if it was stress, sleep deprivation, the typical i-woke-up-early-and-didn't-eat or some real pathology to have that hipoglycemia.

Anyway, we always remember it and laugh about it. He wants to be a traumatologist, though.


PS. Excellent blog, Mr. Bongi. I don't like surgeons in general, but I feel like you are one of the atypical ones :).