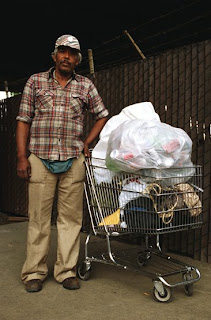 if i were ever to write my memoirs i'd probably use my blog posts as a sort of template. that having been said i suppose i should mention the following episode on my blog (bearing in mind i'll probably be so senile by the time i write my life story that i'd otherwise forget it)

it was in the last year of my training. due to a number of circumstances that i might go into more fully in my memoirs, i found myself without a home. i also was only getting a fraction of my salary. i found myself homeless and very nearly penniless (in south africa i should say centsless or is that senseless). to quit surgery was simply not an option. desperate times called for desperate measures.

next to the hospital was a block of flats (apartment building) that the students used when they were on call. the department of surgery had three such flats allocated to the students rotating with us. the lady that handled the flats for the department was one of only a handful of people that knew of my plight and she was willing to help. she gave me the keys to one of these and 'forgot' to ask for them back.

the flat was not made for living in. firstly there were two beds in the bedroom and two beds in the lounge. there was a kettle and one coffee mug. there was nothing else. every day the flats were cleaned out, so there could be no sign of permanent occupation. if the powers that be heard that the senior registrar was squatting in one of the call rooms designated to the students i would be in trouble, but more seriously, i would have no place to lay my head down. so each day i would pack up my stuff and put it all in the boot of my car. i did have a fold up camping stool that i could hide in one of the cupboards at the top where no one would look and that was the only sign of a permanent resident that i left in that flat.

after work each day i would come 'home', put my suitcase on the one bed, take down the chair and make myself some coffee. i would study as best i could under these dismal conditions. i would then sleep in the bed next to the bed with my suitcase (usually in the lounge). in the morning i would take a bath, pack my bag, hide the chair and my coffee, evacuate the room and go to work. the one advantage is that the cleaners would always make my bed and there was always enough toilet paper. i lived like this for just over 6 months and it was not fun. to be honest i started doubting i could actually pass surgery because my mind was not focused on it to the required degree. then a friend demonstrated to me that he was indeed a friend.

when this particular friend found out about my spartan existence (i think the lady in administration accidentally let slip that i was living there) he invited me to move into his flat with him. he had a three bedroom place and he was alone. i accepted.
he never asked rent of me and when i offered what i could, he declined, saying there was bound to be a time when i could pay him back in kind. the third bedroom served as my study and this is where i spent every spare moment for about five months just before my finals.

i truly feel that if it was not for this friend's intervention in a time of my life when i really needed it, i would not be what i am today. i do not believe i would have or could have passed surgery if i had stayed in that hellhole right up to the end.
Posted by Bongi at 4:57 pm

What an amazing friend indeed! So glad you had him, because I would hate of the alternative.

Thank you for sharing this personal story.

I can't imagine the pressure of going through surgical residency & being homeless.
I don't know what to say except this is a remarkable story and you are a remarkable person.

What a great story. Living with us now is a 18 yr old friend of my son's who has lived with us for years, as he had nowhere to go and his parents are IV drug users. One day my son said, "You have no idea what Bob's house is like--can he live with us?" My older son confirmed this story, and he's lived with us ever since. His parents live nearby, and they've never once contacted me in all this time. Bob doesn't go home, as they just shake him down for drug money. Bob has been such a blessing to us, though, honestly, we love him and count him as a family member.

Bongi- You are my kindred spirit though you have progressed much farther than I. I too have been homeless, and I too have had such angels rescue me. I am thankful that now I am in a position to help others as others have helped me, as are you in what you do gladly every day.

What a wonderful "pay it forward" story. :)

roer- no one wants to be the first to ask!

What incredible dedication. I'm not in medicine, but I, too, got through my education on a spartan budget and was at one point (briefly) homeless without a safety net. I would not trade the struggle for anything.

makeminetrauma, it seems you understand a bit of afrikaans?

I am learning, little by little.
So, what does it mean?

make mine trauma, if you are really learning, i would be extremely impressed.

boemelaar means something like a homeless person or a bum. beggar might be thrown in there somewhere.