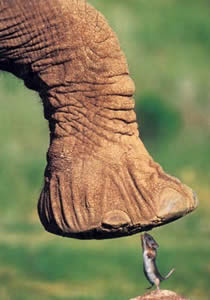 the prof always used to say,
"small cut, small surgeon. big cut, big surgeon." in trauma this made sense. but when the world was moving towards less invasive methods this seemed somewhat redundant. and yet when the world had all but rejected open cholecystectomies in favour of laparoscopic procedures, in the prof's firm we were still cutting 20cm incisions below the right costal margin.

in my private assistances i was learning things the prof didn't even dream about. it all came to the fore one fateful day.

i was in the prof's firm. my medical officer was a rotating orthopod, a massive guy with a massive sense of humour and, unfortunately a massive mouth. we were on call. and as with calls, we were busy. the orthopod was sorting out the constant stream of patients in casualties and i was operating way into the wee hours. every now and then he would come into theater to update me on what he had done and ask my advice when he wasn't sure what to do.

that night i did, among other things, two appendisectomies on two young women. as was my habit by this time, i removed the appendixes through incisions slightly smaller than 1cm. i somehow thought young girls would appreciate this from a cosmetic point of view. it also made the operation more challenging. the orthopod was amazed. he had never seen such a small incision for an appendix before. in fact he could not stop speaking about it. truth be told, i appreciated the attention. after the operations i placed nice large plasters over the wounds to hide the evidence from the prof.

next morning we did rounds with the prof. when we got to the first patient, the orthopod leaned over to me and whispered that i should show the prof the wounds. i told him in no uncertain terms that he was not to mention anything to the prof at all about the size of the incisions. i could see the disappointment on his face.

when we got to the next appendix patient, the orthopod was literally biting his bottom lip to stop himself from speaking. again i warned him not to say a word. unfortunately he could no longer hold his mouth.
"prof, take a look at the size of bongi's wound!" my heart sank. i hoped if i just maintained composure the prof would let the comment pass and move on. and it looked as if he would. but then big mouth went on about it being such a small wound. this was too much for the prof's inquisitiveness. he opened the wound. then all hell broke loose.

the rest of the rounds entailed the prof berating me consistently and in front of all the students and patients that i must never ever make such a small incision ever again. it went on and on and on. in the end i phased out, just repeating 'yes prof, sorry prof' when there was a lull in his constant stream of chastisement. the orthopod also realized his mistake and looked quite sheepish. afterwards he did apologize. i appreciated that.

there was one more funny sequel to this story. about a month later once the orthopod had moved on and had been replaced by a general surgeon medical officer i once again did an appendisectomy. i was quite careful to make a 3cm incision this time around. on the rounds the next day, the prof decided to check the incision to make sure i had taken his advice.

he slowly lifted the plaster. he took one look at the incision and stepped back.
"no, bongi, no! what have you done?" my medical officer looked confused. he turned to the prof and said.
"is the wound too big or too small?" that did not go down well, especially when i laughed.
Posted by Bongi at 1:04 am

LOL! That's great. I can just picture the look on the orthopod's face as he tried to figure out why you wanted him to be quiet. "Is it too big or too small?" Makes my day.

"is the wound too big or too small?" that did not go down well, especially when i laughed.

Hahaha, A very amusing story! I can just picture the orthopod biting his lip trying to keep quiet! I know I sometimes have trouble not talking about something even with people telling me to keep my mouth shut! Sometimes, these things are just so cool! I'm sure if it had been any less amazing, he would've been able to contain himself.

We ophthalmologists have moved from a 9 mm cataract incision to a 2.2 mm one. We must be the smallest of all surgeons.

Haha!!! Clearly that was too much for the poor orthopod as well. I am sure the patient would have appreciated a smaller incision!

Did the prof give a reason for his insistence that the wound was too small? Could it result in any complications? I'm guessing not and that he was just being an ass for the sake of being an ass, but I just thought I'd check...

teacher, generally the more visibility you have the easier and possibly the safer the operation is. obviously this must be balanced against the discomfort and increased wound problems with large cuts. technically the mini-appendisectomy is more difficult and that's probably his main concern. but, if during an operation you see things are getting tricky you can always make a small incision larger. you can not make a large incision smaller though.

Is this what I have to look forward to? I definitely don't have the right personality to put up with petty B.S., especially when it effects ones ability to do ones job. Though I did survive a cello teacher just like that. . .

Thanks for the mini-lesson, Bongi, I appreciate your taking the time.

I had a registrar last year who used to say to me, 'My girl, the road to hell is paved through small incisions' before making a nice, big, liberal incision. I think he was just trying to teach me how to be safe at my level.

Prof was a bit of a sadist though, wasn't he? I seem to remember that he didn't allow opioid analgesia, believing that pain was part of the healing process and that a little post-op pain-relief would invariably open a door to the dark world of addiction and all that goes with it.

I am not sure anyone can do an open appendectomy with a 1 cm incision or less. 3 cms, maybe, in a female patient with a lax abdominal wall! :)

though not always, i can do an appendisectomy through a 1cm incision.

Great story - I am a UK based surgeon that has started doing entire operations through the umbilicus (belly-button)with a laparoscope, leaving no scar! This has been successful for small kidneys, gallbladders and the appendix. I wonder what your Prof would have made of this practice!

Bongi,
"Small cuts small surgeon, big cuts big surgeon" is an old addage. Do you remember, "Who said it first"? I felt that it was Lord Moynihan of Leeds. Can you add on it further, please.