there is no pill for stupidity 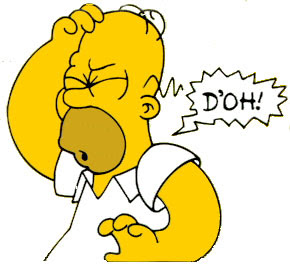 when the superintendent of the referring hospital phoned, he said;
"there is something funny on the x-ray!" what exactly the funny thing was he could not tell me. he could tell me what it was not. it was apparently not free air in the peritoneal cavity (indicating perforation of some part of the intestinal canal) and it was not air fluid levels in the small bowel (indicating obstruction). it was simply something funny. he also mentioned the abdomen was acute (a surgical term pretty much meaning an operation was indicated). i told them to send.

what it did show was a full colon. but it was the most loaded colon i've ever seen on x-ray. usually feces is a mix of solid and gas, but this showed only solid matter filling the entire colon. i asked the patient when last she had passed a stool.
"i don't pass stools." was her simple factual reply. i wanted to ask her if she thought it was normal to not pass stools and where did she think all the stuff that she was throwing in above was going. but it was late and i wanted to get the operation behind me. so i tasked the junior doctor with getting the patient to theater and waited for his call.

i opened in the midline. there was a perforation in the sigmoid caused by pressure inside the lumen of the bowel, causing necrosis of the retroperitoneal region. that was something i've dealt with many times. but what was 'funny' was the content of the colon. the entire colon was filled with what looked like feces but was as hard as rock. i spent most of the operation milking this stuff out and dumping it in a large basin. in the end i had removed about 4kg of rock hard feces as well as the sigmoid. it was not fun.

while i was evacuating this colon i had time to reflect. i couldn't help once again considering the fact that this woman had just accepted that she did not pass stools as normal. she had not sought help until the pressure had ruptured her colon and endangered her life.

yes indeed, there is no pill for stupidity. . . you must operate.
Posted by Bongi at 9:51 pm

I was just wondering, how come she did not feel constipated or like something was wrong with her?

she suffered severe abdominal cramps every day and must have known there was something wrong. she just didn't do anything about it.

How old was this woman? Amazing...

ramona, i can't really remember, but she must have been the younger side of 50

I wonder if she was a bulimic in denial who had abused laxatives to the point where her colon didn't function anymore.

dev, as it turns out, after the operation she admitted to eating gravel. this surprised me because it did not look like gravel on the x-rays which has a particular appearance. but suffice to say she really did have rock hard stools. they were infused with tiny pieces of sand compacted together. They were absolutely not compressible at all. even without laxative abuse, that colon didn't stand a chance.

that is just weird. no feeling of fullness whatsoever? its amazing how she could eat all that gravel too... was she admitted to psych after?

Wow. I had a student with pica a few years ago, and I had to watch her every second. She ate the threshold off her house on her parent's watch, but I'm proud to say I only lost one crayon. I left a comment for you over at Surgeonsblog, too, re: S African politics. Thanks for responding!

Oh my!
Did she have a gravelly voice too?

But women DON'T poo. I've often heard men talk of this "passing stool" and "passing flatus" and I've always wondered what it's like.

Humans are truly amazing. This is the best medical post of the week. I gave you a plug on my blog.

Kevin MD, posted a related link a few days after you posted this.

Great stuff.
I just found your blog and love it.
Look forward to reading more.
my website
www.papercraft-ideas.com

Is it sick and wrong to say that I wish I had been in that OR? Truly bizarre.

I have a different insight which only gives a proof of my personal theory. Maybe the lady is suffering from a psychiatric condition, but I have my doubts.

I suggest Attention Deficit Disorder, where she has not been able to shift her attention from the state she was in forward. People with ADD have sensory issues and I might even suggest that the intestines may have less nerves or the impulses are not handled properly by the brain.

People with ADD represent in every respect the two ends of a line. Others are "dry thinnies", they can't get on weight and they can forget to eat. Malnutrition haunts them. Others have issues of overeating and binging, filling themselves with visceral fat. Drinking water does not occur to them and eating veggies is for rabbits.

If I look the case from the ADD's point of view, it would be very benificial to evaluate her of ADD. If she is suffering from more severe psychiatric symptoms, they will come out during the process.

Let me make it clear:

There is no pill for stupidity, but for Attention Deficit there is.

My mother and i and all my aunts have been struggling with that problems for years. We all have Pernicious Anemia, we've been told its common in Pernicious Anemia patients. We've seen doctors they didnt say it was not normal, i was wondering as to why? they have not even Xrayed. Its not that we do not at all probably once every 2-3 weeks. Its weird she passed it as something normal, unbelievable.