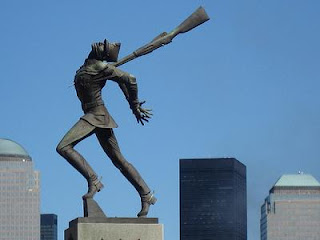 another story of the futility of trying to get it right in kalafong happend to a friend of mine.

the patient was stabbed just outside the hospital at the taxi rank. his friends immediately carried him into casualties. my friend and colleague happened to be there at the time. he immediately saw that the stab was probably to the heart and the patient was in trouble.

my friend grabbed the gurney and charged off to theater. amazingly enough he got the patient onto the table almost immediately (very nearly unheard of in kalafong). similar to my previous story, by the time he put knife to skin, the patient was in exitus.

the surgeon ripped his sternum open at double quick time. the pericard was a large sack of blood. the heart just couldn't compete against this and had stopped beating (this is not good). the surgeon opened the pericard and drained the blood. this allowed the heart to start beating again. unfortunately with the first contraction a stream of blood shot out of the left ventricle.

a steady hand and a few stitches later and the heart was no longer leaking. all that was left was to close.

the next morning, when i heard the story i was pretty impressed. a general surgeon had moved into a domain that he was not fully comfortable with and managed to pull a patient through that had actually been stabbed in the heart and that in the left ventricle. when he presented the next morning, once again the professor ripped into him.

it seems, according to the professor that the correct entry should have been a thoracotomy (between the ribs) rather than a sternotomy (through the middle chest bone). the small matter of getting the patient on the table literally about 10 minutes after the incident and pulling a guy through that had received an essentially fatal wound seemed of little concern. at a stage the prof even attacked my bewildered friend personally. as usually we all sat in silence. it was not the first time and it would not be the last time that this happened. we had all at some or other stage experienced the wrath from on high and it was just his turn.

at a stage my friend rose from his seat in a seething rage. he stood for a moment. he then seemed to realise that the safest move for his career would be to just sit down again. this he then did, but i'm sure i saw steam rising from his head.

after this fiasco, i went to him and said that despite what anyone says i thought he had pulled off something amazing. i even wrote a message on the tea room notice board saying that he was the man. he laughed at this and all seemed better.
Posted by Bongi at 11:28 pm

it's so frustrating when your professors berate you for doing something right just because it wasn't done in the conventional or accepted way.

I can understand why they would choose to point our minor mistakes and reinforce learning at a time when the experience is fresh, but i don't believe that it should be done in such a harsh manner and that it should detract from the junior doctor's accomplishment. Done that way, it stops being a desire to teach and descends into trying to steal back the younger one's thunder by stressing the point that, "I'm still better than you."

I second Dr Clairebear's comment and yours that your friend "was the man"!

I think bongi is the man for saying adorable things like "tea room".

Might I ask about the picture accompanying the story - is there really such a monument anywhere, or is the picture manipulated somehow?

Ah yes, learning by humiliation. It's the medical fraternity's way. And it is exactly that: I'm the professor/consultant and I know better than all of you and don't you forget it. I think it stems from the fact that most doctors grow up being more intelligent than everyone else they know, then they get into medicine and everyone's about as intelligent or even more intelligent than them. It turns some into competitive monsters. And it's especially easy to beat down junior guys so they can feel better about themselves.

samson, to tell the truth it's just a picture i came across and liked. i don't know if it's a real monument.

Midwife with a Knife said...

I'm beginning to suggest that you must be a jerk to teach medicine in South Africa.

Midwife, alot of the teachers in S.A. medicine are really great, but most of the ones highest up are 'jerks'. Suppose people get like that in any position of power.

midwife, it is not a rule, but in surgery the training seems tougher than it need be. i personally experienced it as pretty bad and maybe that's why it is thustly reflected on my blog. i always used to tell the junior guys to show no weakness because it seemed to put the profs into a feeding frenzy.

Hello! I'm a Canadian student of medical laboratory science. I found your blog a few days ago and have spent every afternoon since then reading it. I've finally read my way through the entire archives!

Your blog is absolutely fascinating. Thank you for providing this snapshot into your life.

anonymous, thank you for your flattering comments.

when i was a cosmo, my intern on call treated a guy with sstab heart in casualty with "front room" thoracotomy (ant-lat approach). she did it with the supervision of our senior mo and with no surgeon on call as back up, it was really the only option for the patient. she found the hole in heart, and managed to close it, but the guy still died. the body was sent for autopsy, and after about a week, the prof at forensics phoned her to crap her out and ask what was she thinking to do such a thing. he also mentioned that she had "missed" the other hole in the patients chest: in his aorta. she was devastated. i think she was pretty brave and just trying to do her best! mortality of untreated stab heart = 100%, so why not try save the dude?

the point of this story is that this sort of humiliation and tortore doesnt only happen in academic settings, also in little district hospitals...

Hey Bongi, good story as usual. I think I would have wanted to fill that Prof's pericard with blood myself...

If I am ever in S.A. and I am stabbed in the ventricle, promise me Bongi, proper technique and finesse be dammed, just get the knife out and sew me up so I can be on my way!

It took some time, but the picture is actually Andrzej Pityski's Katyn Memorial in Jersey City, USA. What you cannot see from the angle you have shown, is that the officer's hands are tied behind his back; so this is not just a backstabbing, but an outright execution.

The doctor getting a thorough,unfair scolding from his superior - as we all have had to endure in the course of our carrieres - doesn't have his hands tied, nor is it an execution. The doctor lives on, works on, and if he is wise, he can always say to himself "Thank God that I am not like that" and, more importantly, "Pray to God that I will not turn into something like that"

This is all part of the disease that afflicts those who no longer take emergency call, yet have a need to counteract their self-perceived subconscious impotence - snipe at the people out in the trenches. And to carry the analogy further, it's easy to snipe at your own "soldiers" from behind (well behind) the lines.

Good point Greg P. And the longer time the general has stayed out of the trenches, the more averse he will be to re-entering those trenches. And yet the general yearns for the bloom of his lieutenant's days...and hates those who still actually are lieutenants.

Not to defend the professor, who is a jerk and could easily have made his point in a much better way: but I think it's true that when rapid access to the heard is needed for a stabwound, it's quicker to do a "hockey stick" thoracotomy, cutting between the ribs and then up a few costal cartilages. The trap door can be opened in seconds that way.