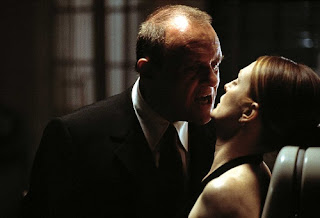 i had fun posting about a psych experience. but there were others less enjoyable.

it was during my psych rotation. i was trying to make the most of it and i occasionally almost got it right. one day our intern asked my colleague and i to accompany her on a call to the maximum security ward. we were up for most things and agreed. only after we had agreed did we ask why.
"because i'm too scared to go alone!" was her frank response. bright flashing lights and loud hortatory bells should have been going off in my head but i didn't want to look like a pruss in front of my friend so i became temporarily blind and deaf to them.

the psychiatric hospital was a big sprawling place with each ward discreetly placed far enough from the other wards to try to create a resort sort of effect. maybe in the addams family, i thought. anyway, one of the results was that maximum security was way up on the hill, out of sight of pretty much everything else. i had in fact never seen it before. so when i saw the eight foot concrete walls with barbed wire on the top i was impressed. they clearly were not messing about. we approached slowly, almost in awe of the monster.

when we got to the entrance i was even more impressed. there were two solid iron doors. a camera identified us as something slightly more benign than special forces or the terminator or rambo maybe and the doors swung open. we shuffled into a sort of holding cell. looking at us through what was no doubt bullet-proof glass were two guards. when they had satisfied themselves that we were in fact one doctor and two medical students and not some sort of covert attack team, the inner metal doors swung open and we entered the main compound. nothing in 5 years of medical training or for that matter twenty four years of life could ever have prepared me for what i saw after all those stringent security checks.... nothing.

there was a nondescript road ahead of us with houses on either side. but the road was totally deserted. i imagined a breeze ominously blowing through the grass but in actual fact the grass stood dead still. there was also no eerie music playing which just didn't seem to fit in with the general genre. but the thing that i found most disturbingly normal was the lack of a heavily armed escort. i mean after getting through fort knox-like security surely there should at least be a guy with a truncheon sort of standing around in a lazy way on the other side of the double locked steel doors?

i couldn't help it. i had heard my mind's logic and the final words hung silently in the air. locked steel doors!!! locked steel doors!!! i turned around and observed, now with almost wild panic that there weren't even handles on the doors. where they met the walls and each other was almost seamless perfection. i felt like i couldn't breathe. that breeze would be great right about now, i thought. i tried to take control of my mind, get a grip! i told myself. at least there are no crazies. they must have been locked up before we got here obviously. we are quite safe. the crazies suddenly appeared as if on cue.

at that moment, if sheer terror hadn't totally paralysed all my faculties, i'm sure i would have been able to draw similarities with any number of low-budget zombie movies, because that, in retrospect was how it was. people approached from all sides, walking slowly forward or maybe lurching slowly forward, arms extended and engulfed us with only one word uttered from their lips like a chant, over and over again.

we fought our way through them and finally got to the medical building. we slammed the glass doors behind us as any number of zombies (for that is what my mind had decided they were and no amount of convincing is going to change my mind now thank you very much) threw themselves up against it. i could see the headlines: 'promising young medical student found dead in prominent psychiatric institute. only brain missing.'
then the sister appeared as if from nowhere. if it wasn't midday i would have sworn i saw a bat flutter in just before her human form became apparent. she charged the glass door and as if by magic the patients dissipated and were soon all gone.

she led us through to the examination room where our patient awaited us. it was a man in his thirties with a deep gash in either cheek. i was impressed by the symmetry.

"what happened to him?" i had to ask.

"he fell and cut one cheek. when he saw himself in the mirror, he broke the glass and used a shard to cut the other cheek so both sides would look the same." i wasn't surprised that he was clearly mad. what would one expect? but the fact that any one of those many zombies outside could have access to shards of broken mirror sunk down into my soul and festered like a septic wound. all i could think was we had to somehow get past them all again and this time they were waiting for us. 'remains of medical student found in prominent psychiatric institution. disfigured beyond all recognition'...somehow seemed more appropriate. i needed to get my mind off it.

"why is this patient in here?" i asked. at the time it was no more than an innocent question, i swear!!

"oh, he killed and dismembered his entire family." said the nurse as if she was reciting the day's minimum and maximum temperatures. he what exactly??? my mind screamed. i wanted to ask if that was generally the sort of thing that would get you into maximum security in this institution but i knew that her answer would have implications pertaining to the hordes waiting for us outside. i decided i just didn't want to know.

at about this stage my mind thankfully went blank. i think it was some sort of subconscious defence strategy. whatever it was i'm just grateful. i came to my senses when we were out again and getting back into the intern's car. i stared ahead in silence for some time. finally i spoke.

Are you sure that all this actually happened? Maybe you actually went temporarily insane.

I have never liked going into a locked ward (psych or prison ward). There is something very disconcerting about being "locked" in.

Oh great, just great. Tomorrow is my first psych intensive. Today was the "safety" briefing, and I just read your post.
-SCNS

Oh my....ladies and gents. I am a mental health social worker...I've worked in a few locked wards...

You see much more aggressiveness and drama in an ER. If someone has truly having a psychiatric emergency, and out of control, that is where they will begin their journey.
In my experience, patients who seem very threatening are just very scared themselves (if they are hearing voices).

I volunteered at the local state hospital, the kets wer huge skeleton keys...

However, it is all a reflection of someone's culture. As South Africa is a very violent state, I would be afraid in that ward too!

superb post bongi!!!
you had me at the edge of my seat.

In reply to amanzimtoti: Didn't you actually mean maybe Bongi had a temporary lucid interval in which he was aware of his surroundings? ;)

I made an middle-of-the-night ambulance call to the infirmary of the maximum security federal prison in Atlanta, GA.

(This was before some of the Mariel boatlift Cubans had burnt half the place down.)

Our escort's sole weaponry was a two-way radio.

And I distinctly recall thinking, "If this guy (meaning the guard) has a heart attack and dies, we ain't NEVER getting out of here."

You really need (or get someone) to compile all your stories and publish a biography :-) I'd love it read it!

@ rlbates- don't let that bother you too much. You'd be shocked at how easy the windows are to get open... personal experience speaking.

I felt your apprehension with every group of exclamation points!!! You're quite accomplished when even your punctuation furthers your narrative.

So... were these patients all "criminally" insane (versus the innocently insane)?

In the 70s I visited the most famous Max. Security Hospital in England and I must say the experience was not dissimilar. The most feared were the 30 something female patients: nothing can hold them as they will get through 5 in. steel reinforced doors. Now it is a lot more humane as they let them out into the streets (sorry, community) and only the occasional random person got killed (Zito Case)

By the way the cigarettes reduced the effect of most modern antipsychotics and more would have to be used-win win for tobacco and big pharmas.

If you, a person who is mentally well (assuming) are scared in a place like this imagine how the people locked inside must feel. This scary atmosphere cannot be good for anyone's mental health.

As a person with a mental illness I am terrified that I will become so sic I will end up homeless, or worse, loced away in a scary place. Maybe someone needs to address the helpfulness and healthiness of the place that scared the wits out of you and your collegues.
...aqua

That is the single most bizarre thing I've ever read, more so than early Roald Dahl works...amazed and afraid

Certainly puts you right in the moment, and in the place. Good stuff!

Certainly puts you in the moment and in the place. Good stuff!