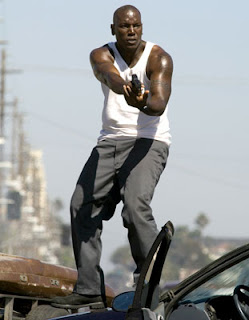 being south african at this moment in time comes with certain risks. recently my reaction to an incident brought this home.

i was on my way back to nelspruit from pretoria late at night. suddenly on a fairly deserted part of the road a small buck jumped out in front of my car. i didn't even have time to react before i hit it. hitting even a small buck at 140km/h does quite a bit of damage and this was no exception. the front of the car was smashed in. the radiator was ripped open and the bodywork was pushed up against the left front wheel.

i was far from anywhere so i soldiered on. fortunately i was just entering the lowveld so i turned the car off and free wheeled down the two passes. but quite soon i was forced to stop. in this time, while gently limping the car down the passes the necessary calls to insurance, and by implication, tow companies were made, so by the time i actually stopped, people had been mobilised.

when the car finally came to a stop it was in a totally deserted part of the road. there were no lights visible anywhere and an overcast sky hid any trace of the moon. i turned on my hazard lights and waited.

then i had a south african thought. what happens if someone comes past? would i be the victim of violent crime? this is a real consideration in the modern south africa and in no way reflects paranoia. on a regular basis we read about hapless victims of car breakdown who are attacked and often killed on the roadside. recently there was a criminal element that would patrol the very road i was on and pull cars over to rob the victims, quite often shooting at their cars or them. my concerns were real. suddenly the hazard lights were glaringly bright. they seemed to advertise the car's presence for miles around. i quickly turned them off. as the very occasional car drove past i used their headlights to scan the road in both directions looking for a would-be attacker. i didn't even bother trying to stop a car. south africans don't risk stopping for someone on the side of the road, ostensibly in trouble. it is too often a trap.

then i thought if i do see someone, if i jump out and run they will see me too and i'd be a lead magnet. to stay in the car wasn't safe. i turned the hazards back on and got out. i readied my knife, just in case, crossed the road and went into the veld just out of sight. there i was safe. if someone did come along i would just slip away. the hazard lights marked the car for the tow company and my friend who were on the way. when they arrived, i would join them.

the way i dealt with the situation, from flogging the nearly dead car to hiding in the veld and the thoughts that went trough my mind were typical for us south africans. in fact when i discussed it with my colleagues the next day at work there was no one that teased me or thought it strange. across the board everyone fully sympathised and agreed with my way of handling it.

once again i find myself in a reflective mood about staying in this crime-ridden society. what is a small disaster turns into a possible major catastrophe because of the serious risk of sudden violent death. does it really need to be like this? unfortunately that question would have to be directed at the government of the day who so far have shown no sign of addressing crime at all. on the contrary they have even disbanded the one effective crime fighting unit because of the danger they would also target corrupt officials. we just can't have that now can we?
Posted by Bongi at 1:33 pm

Bongi You live in a fear of your own creation. Nothing happened did it? The more deserted the area the safer you are. I would rather be taking photos in the Schoemanskloof at midnight that in downtown Nelspruit.

Nobody wants to hijack a busted car anyway. Wheres the buck, we making Biltong?

guy, yes schoemanskloof is safer because there are so few people, but if someone of questionable moral fiber were to turn up the chances that something happened would be higher than in nelspruit. yes in nelspruit we rub shoulders with the criminal element probably every day, but the opportunity for them to do something is diminished because of all the other people. there, the opportunity was ripe. only the criminal element was fortunately absent.

that road isn't totally deserted. i drive it a lot at night and a bit closer to nelspruit from where i was i often see people walking along in various states of inebriation.

the car had no chance of being hijacked but the wallet with cash in my pocket may not have been so lucky.

you are not the first to ask about the biltong. in fact that is what most of my colleagues also wanted to know, but alas i left it where it fell.

When we are young...
There is satisfaction in putting yourself in difficult situations in life and work, surviving them and finding what you are made of. How much you can take?

10 years later...
You are no longer testing yourself so to speak, but have accepted these difficult situations as normal operating procedure of life/work. You understand that this might be somewhat irrational, but you continue because you feel that part of what separates you from the pack is that you, can handle anything, a lot of it, and more importantly are in total control. You say to yourself, that you don't have to do things this way, you choose to.

Guy: you'll have to forgive me if I'm disinclined to agree with you; recognising the criminal element of the SA society is not a "fear of (his) own creation". It's a reality. How you deal with it, of course, is different. The very fact that Bongi remains in such a crime-filled country is testament to his lack of fear. Recognising he was in a potentially dangerous situation is just sensible. He then took steps to avoid becoming a statistic. I no longer live there so I don't know what I'd do above flat-out panic. My brother (who does still live in SA) would probably do exactly what Bongi did!

Bongi, I am delighted "the criminal element was fortunately absent".

An insightful comment, and an interesting blog. But, good Lord, the last post is riddled with typos.

john, sorry about that. it usually takes me a few reads and advice from friends to get rid of the typos. i didn't read through this before i posted and friends haven't helped me in my evil ways yet.rest assured they will gradually be corrected. i'd prefer if you pointed out specifics and then i could classify you under the group friend too.

This is why, when I found your blog, I read a single post, then added it to Google Reader, and THEN read many, many pages back.

It's not just a medblog. It's an africa blog that's accessible to me. (Most of the ones I've found are too african for me to "get", as an American, or are boring. And I love reading all I can from/about southern Africa)

Thanks for all the posts <3

Jabu I live very near to Bongi. Not sure of the exact distances but in the same town.

I too live with the Lowvelder telling me I live in a war zone. I find my reality far removed from many of my peers. Maybe I just refuse to hide in the bushes and become lion bait.

I have heard about all the bad stuff and know that I am a potential victim, but until I am a victim, I refuse to be one.

John the punctuation police and people like you really need to take a dump. Facts are that I find Bongi's writing satisfactory and easy to understand, so the odd typo or spelling error creeps in, seriously who gives a shit?

Bongi, I can tell a tale of a drunk, at night that survived by grace alone. I can tell of sitting on the side of the road waiting for someone to tow me and wondrful people I have met stopping to assist not to rob me.

Maybe I am just luckier than most?

It sounds like you behaved like any sensible person would...I'll always happily take my chances with a lion in the bush than a man with an AK...and I don't think its about having a "victim" mentality...its about having a "survivors" mentality...and anyone in medicine knows that it is not just a semantic difference.Truth is,if you've had any military training,thats what you would have been taught to do.Personally though,I do think you should put your faith in a 357 with hydrashock bullets.Wanna buy a slightly used one??

At least now you have an excuse to get a new car.

Well in South Africa, where I have lived for 38 years, you can be careful, quick or dead.Well done Bongi for precautionary action, thereby supplying the ungrateful and undeserving with another health care provider, to tend to their broken bodies, when presenting for treatment!
We all face these dilemmas in an emergency.Kevin Bloom's new book Ways of Staying details this dilemma well.No helpful solution there though! keep ducking the bullets.

Gee Bongi! i am sorry that happened but glad you are alright. No one should have to live that way.

It's just so wrong.

Some years ago when I was hitching back to South Africa from Zimbabwe to sneak back into Medical School I got dropped off around midnight on a road side not too far from the family of a friend. I phoned the family awake and asked for a lift and a bed. They sent their teenage son in a bakkie (pick-up or ute) to collect me.

It was such a beautiful site, I jumped onto the vehicle and banged on the roof screaming: "RY BROER!!!!" (Drive!!!) before he could even greet me.

We left behind two well built men with tyre irons standing in the darkness. Maybe I was paranoid, or maybe I was seconds away from a violent death. I wasn't prepared to find out if they merely good Samaritans that walk the streets at night helping the hapless change tyres.

South Africans have this mark in the world too. I've read that Pratley’s Putty is an extremely strong adhesive sold across the world. Used by Nasa, in the 1960s it is the only South African invention to have made it to the moon!