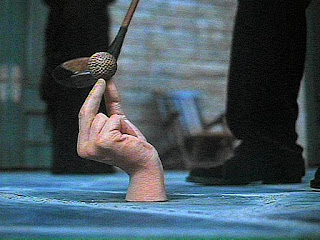 i spoke about foreigners and relative attitudes between them and myself. but, truth be told, one of the reasons they think they are in deepest darkest africa when they are here is because they are!!!

we pick up the story roughly where i left it off. the initial accident claimed two lives. then the young son has to survive a brain bleed and a neck fracture. somehow the neourosurgeon sorts all that out. then in icu he gets acalculous cholecystitis and i meet him, almost in exitus. we fetch him from the pearly gates and tie him up in icu for a while. he survives. he can walk. his maths and science still works. miraculous!

but for a moment imagine the father, the only one not really injured in the accident. he is in a foreign country. he has just lost 50% of his family and there is a real chance his son might die or be paralysed or retarded for life. the daily icu vigil alone must have taken a toll on him. and then things slowly start improving.

after too long away from home they are ready to leave. the son is amazingly well. he is neither paralysed nor retarded. also he is alive which everyone sees as a positive thing. then they have the unpleasant task of getting the bodies of the other two members of the family. what do they find? certain body parts are missing, including one hand!!! stolen from the dead in the morgue. you just can't make this sort of thing up. i dare you to try.

i have spoken before about body parts stolen to be used by sangomas for so called traditional medicine, so i suppose i shouldn't be shocked, but i was. i couldn't help feeling for him. over and above all the terrible things that happened to this man and his family he has to endure the bodies of his departed family being desecrated.

this story so affected me i followed it in the local papers for a while and pretty much put it together. at least some of the people were actually arrested so quite a lot of the story became public. it seems there were people working in the morgue who regularly stole body parts to sell to sangomas. they would target the bodies which were to be cremated and cut out the desired organs just before cremation. no one would be the wiser. the foreigners were targeted, it seems, because the body lay in the morgue so long while the boy recovered in hospital.

so, in conclusion, this is deepest darkest africa and here you will truly be amongst us savages.
Posted by Bongi at 6:24 pm

I am a child of Africa, yet still I shake my head and say Eish!! Yet somehow this doesn't surprise me at all. Some things have not changed, even in 20 years ...

There is no geographic limitation on savagery.

So your psychi patient you interviewed when a medical student: who said a sangoma had nicked his penis............did you check? maybe he didnt have a penis. i have recently nursed a true hermaphridite on a psych ward. he said he was a woman. basically if you look there: he she is both.

So sorry to hear they went through that. I don't think it is specific to any country/people/nation. We've had similar thefts here in the states from mortuary directors. Lots of news was made a few years back when it was found that cadaver tissue/bone was not 'donated' but stolen and sold to the company on the black market. Sad none the less.

anonymous, one small difference is that these body parts were destined to become so called medicine of so called traditional healers which are sanctioned and even lauded by our so called leaders.

putting it all together, our government actually encourages the whole traditional healer thing, even advising hiv positive people to first get treatment from these people before seeking anti-retrovirals. it is now public knowledge that there is an active trade in body parts to said 'traditional healers'. by implication our great and mighty government is fine with this.

just this week i treated a man who defaulted on his hiv treatment in favour of sangoma treatment (maybe a severed hand works better???). so the body parts theft, shocking in itself, is much more shocking in our context when you consider the reason behind it and the powers that be that condone it indirectly.