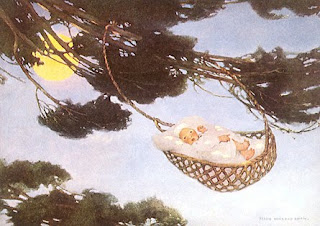 the life of a medical student is somewhat left of normal. most people shy away from blood and guts and gore. as a medical student you need to embrace it. but in the beginning it is quite an adjustment. sometimes you don't know how much to adjust. what falls within the parameter of normal medical student desensitization and what is way too far?

i was a fourth year which in clinical terms meant i was at the bottom of the rung. i was doing my obstetrics rotation which meant i needed to deliver a certain quota of babies in a given time. we all tended to be goal orientated then. our registrar was the most junior obstetrics registrar in their department so she was even more goal orientated than we were. she was also a bit skittish.
so that day, when a lady came in fully dilated and then popped out a dead baby she seemed to go to ground. don't get me wrong. i do not enjoy the whole emotional roller-coaster involved in delivering a dead baby, but once it's done you need to move on, especially in kalafong where the constant stream of bursting women is never ending.

so there we were in kalafong labour ward in the middle of the night with a somewhat unstable registrar who suddenly seemed incapable of pretty much anything because she was so distraught. i had the thought that she should maybe try dermatology as a speciality. it wasn't too late to change. the house doctor spent quite a bit of time consoling her. time i thought could be better spent in consoling the mother who had just lost her child. but a fourth year's opinion was much less sought than listened to. finally the night went on.

some time later when the distraught mother was bundled off to the ward and the dead baby was bundled off to the morgue and the registrar bundled herself off to the doctor's room the call finally continued. we continued delivering babies while the registrar went through the prenatal record of the mother to try to see if there was a possible reason for the death. she discovered the mother's blood group was rhesus negative. this basically meant if the baby was rhesus positive the mother needed to get an injection of antibodies to prevent her developing her own antibodies against the rhesus factor. if this happened her chances of successfully bringing her next pregnancy to term would be greatly reduced. the registrar hadn't drawn the chord blood from the baby which is the normal method of getting blood to determine the baby's blood group. she therefore didn't know if the mother needed the injection or not. i simply thought it's not worth taking the risk and we should rather just give the mother the injection on the grounds that the baby was most probably rhesus positive. but the real reason the registrar was in a spin had to do with what the professor was going to say in a few short hours at handover about her not drawing chord blood from the baby. she settled on a plan.

"you!" she indicated my friend and i, "you are going to go down to the morgue and get that baby's blood. and you'd better move it. the sun will be up soon.

the morality of what she was asking didn't occur to me then. it was late and we were tired. also we were junior. if the registrar told us to do something then we were required to do it. so off we went.

kalafong is a scary place on a good night. the morgue was in a ditch along a deserted corridor. all was dark and foreboding. but we were on a mission and our over active imaginations weren't going to stop us. we finally found the poor baby and got to trying to get blood. then we discovered something. you actually need to be living for your blood to be drawn out of conventional veins. after a few attempts we graduated to trying to get blood through the frontal fontanelle. this also didn't work, probably because the small amount of blood there had clotted and couldn't be drawn up in a standard syringe. finally we stuck the biggest needle we had right into the heart and managed to get a small amount of blood. by this stage my own blood was curdling, the hairs on the back of my neck were standing up and i felt sick to my soul. we left.

the registrar took the blood without so much as a small acknowledgement towards us that we had done something terrible so that she could avoid the wrath of the professor.

many times since then i have been haunted by how wrong what we had done there in the dank corridors of kalafong was, but it was a lifetime ago and maybe time does wash at least some sins away.
Posted by Bongi at 11:50 pm

Sometimes we find it difficult to forgive ourselves for things done outside our control.

The horrors of medicine, or more so, a medical student! At least you've moved up the pecking order and no longer have to do the "dirty work"

ps. Ive been accepted at UCT for MBChB!! As I am a white male, Im sure you can appreciate the euphoric state I am in at the moment!! Never dreamed of getting in there...:D:D

I understand the horror and the trauma of what you had to do -- but was it wrong? I suppose in certain belief systems it could be wrong to "desecrate" a body, or I suppose there might have been an issue of consent, but those seem trivial concerns, and there was a real, live patient who stood to benefit from that information.

Suffice it to say that on the basis of pure pragmatism I would not morally condemn you on that matter.

(I'm sure you're much relieved)

I would agree with shadowfax. I think you performed a necessary "evil" in order to benefit the mothers life. I would have done the same.

I too agree with shadow. In fact, I would go further: I see 'nothing' wrong with this (in the moral, right vs. wrong sense).

And I have thought a fair bit about it. As a second-year resident, I was instructed to help an intern get blood from an unsuccessful code of a likely SIDS baby. The reason for this blood is still a bit unclear to me, but at the time was "to see if we can figure something out".

After much thought, the only bad part of it would be wasting money on useless tests in the case I described...but in the case you described, determining the Rh status seems quite reasonable to me (but wouldn't the mother have already required RhoGAM much earlier?).

What you did wasn't wrong. It might have saved that woman's next pregnancy.

But your resigistrar? She was wrong in asking you to do that to cover up her screwup.

sheesh...but I remember that Prof! It's no excuse but people have done crazy things to avoid his wrath.

When I was in medical school there was a story which I can only take to be a "medical school urban legend" of a medical student who was always able to get blood from patients when no one else could, then is was discovered he was doing cardiac sticks.

Considering the trauma of some even minor autopsy, this blood-drawing barely raises an eyebrow, and it was done for a clear medical purpose.

The only potential shame could have come from getting some anonymous blood to substitute for that from the right source.

to me the problem had to do with the mother and consent. there was little or no attention given to the mother after a severely traumatic incident. then we went and further violated her baby not only without her consent but without her knowledge. i mean the physicality of it was not as bad or gruesome as many things i have done in the past but i do things for which i have consent.

i suppose you could say out of sight out of mind, but it doesn't make it right. the baby felt nothing, but how would you feel if after having lost your baby you later learn that some snot nosed medical student was stabbing the corpse full of holes? i doubt she would have been so pragmatic about it all. ironically getting consent for a clearly logical procedure like this would no doubt not have been too difficult.

also the reg was concerned about one person and one person alone. i.e. herself. she sent us into that dungeon not to do the right thing for the mother, but to cover her rear end.

lin, yes the students and the people in his department feared that prof. later i discovered that bravado and arrogance often are used to hide ignorance, so as a surgery reg i pittied him. the fear was gone.

greg, if she continued along in o et g, and didn't deviate into dermatology, i'm sure she would have become pretty similar to her mentor. good point.

i have similar story from my intern days: a teen-aged girl had a 2nd trimester abortion after being allegedly raped by her stepfather. she delivered in the early hours of the morning during my on-call. it was my privilege as intern to collect specimens for the forensic investigation.

trust me when i say that obtaining 1cc of blood and a square cm of tissue from a 300g fetus at 3 in the morning is neither straightforward nor conducive to a good night's sleep for the next week or so.

You know, most of those women are crazy. Many of my unhappiest memories come from that department in that hospital.

And ya, she should've just given the woman anti-D, really. I've worked in a lot of non-basic places since, and nobody worries about the cord blood, they just give it.

I am not what i want to be

i am not what i am going to be

i am not what i was

I think your reg was totally out of line - she should have just given the anti-D - it's done all the time - but she wanted the blood because she was only concerned about herself and covering her own arse. You're spot on about that her not caring about the mother.

A classic case of projection: she simply transferred her feelings onto you, leaving YOU to feel guilty for HER screw-up.

Yup, she should have just given the anti-D. Stupid, craven registrar. To think how I cowered before the supposed might of that department too, only to discover that it was populated full of personality disorders.