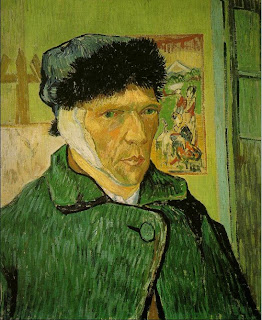 recently a plastic surgeon i know was called out to fix a lacerated ear. it is the domain of plastic surgeons pretty much all over the world. but in my neck of the woods it may be tricky to extricate a plastic surgeon from his warm bed on a cold night. let me also say that back in those days all registrars of all disciplines earned the same overtime each month. even opthalmologists and dermatologists and pathologists earned exactly the same overtime as surgeons. they weren't complaining. we, however, were.

as calls went it was fairly standard for us general surgeons. i had found a moment to empty my bladder which was a nice change, but other than that one reprise there had not been a moment to even realise that i hadn't eaten all day. at least there hadn't been any lethal disasters...yet.

somewhere in the madness the house doctor asked me to evaluate a patient with a lacerated ear. he had had half his ear detached in a bar brawl. it was hanging precariously from what still connected it to the body. now at this time in that hospital there was a policy that once a patient had been referred by a casualty officer they would not take the patient back. if the referral was erroneous then we would be required to refer further as appropriate. so when i heard my house doctor had accepted the patient i was not impressed.

"you suture his ear." i told him. poor guy, he hadn't studied at our university and therefore wasn't used to our sink or swim approach to medical training. he freaked. my level of being impressed dropped even more. i'd have to phone the plastic surgeon myself.

the plastic surgeon was not keen. by that i mean he basically said he was not coming out. by the tone of his voice i assumed he was getting a back rub from his significant other under the warm duvet on his bed. who could blame him. if you're not in the trenches why would you want to go into them, even for a short while to suture an ear.

"anyone can suture an ear. you're there now. i'd have to come in to the hospital. you just do it." i considered telling him that i'm at the hospital because i have so much bloody work to do and that he is drawing the same overtime that i am and that it is his bloody job and not mine. but i knew that at that stage, even if i walked on water and then turned it into wine he was not going to come out. i hung the phone up. my house doctor looked at me questioningly. he had already told me he couldn't do it. but he was not from our neck of the woods. i needed a student. one walked past, unsuspectingly.

"you! have you ever sutured an ear back on?"
"no."
"when i ask this same question tomorrow, you will answer yes. come with me."

Don't tell, but it really is quite simple to sew an ear laceration. :)

rlbates, i know this. even now if there are facial lacerations once the sun has set i do them. seems the plastic guys in our country have a thing for warm beds.

The ER guys here tell me its hard to get many of my colleagues to come out, so it must be the same here.