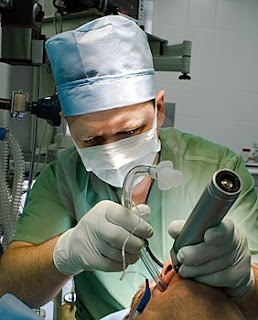 recently i caught up with an old friend. the day i started studying surgery he started in internal medicine. he is now a fancy prof. i was amazed and impressed. he really was, and i assume still is, a really great guy. yet even great people must start out small. i remember the first day we met.
i was on call in the surgical icu. i had been part of the surgery department for a full two days and was still unsure about pretty much everything. so when the internal people phoned asking if we had a bed available for one of their patients i called our prof even though there was one bed empty. the prof was a good man and told me we were obliged to help them even though the pressure on our beds was usually great. i phoned the internist on call and told him he could bring his patient.
some time later a patient was wheeled in. the first thing i noticed was that she was blue, a colour i have often said doesn't appeal to me. the next thing i noticed was that she was just barely breathing. being astute even though inexperienced, i concluded she was in the process of dying. at that moment the physician walked in and introduced himself to me. he had just started in internal medicine two days previously and was also pretty unsure of himself. after whizzing through the formalities of greeting, i pointed out to him that his patient wasn't breathing too well and that she needed intubation and ventilation soon. otherwise one could only hope her policies were all paid up. he looked at her. it was abundantly obvious i was right.
"yes, i see what you mean," he said after a moment's thought. "i'm just quickly going to call my consultant. i'll be right back." and with that, before i even had time to express surprise, he was gone. the sister and i looked at each other with bewilderment on our faces. it just seemed that intubating the patient was at that very moment more important than finding his consultant.
"well, we know what to do." i said, "get the patient into a room and let's intubate. without any further delay or looking around for wandering consultants we soon had the endotracheal tube in position and the patient connected to a ventilator. soon the blue hue was replaced by a more encouraging pink colour. not totally unlike the patient, we all breathed a sigh of relief.
after a short time, the internal registrar returned with consultant in tow. by that time the icu staff and i had settled down and were even making coffee. then i put the story together.
the registrar had been out of clinical medicine for a while doing some or other form of research. he was not confident enough to intubate the patient and just assumed that i also would not be. he therefore felt he needed to get his consultant there as fast as possible to place the tube. it was the best he knew to do at the time. unfortunately it would not have been good enough for the patient. i had to intervene. i was not the patient's best hope. i was the patient's only hope.
well, all's well that ends well.
catching up with the esteemed prof after so many years made me realise how even the mighty have humble beginnings.
Posted by Bongi at 2:20 pm

It is said that every mighty oak tree starts as a small acorn.

its junior doctors who put E.t. tubes down peoples throats who are responsible for the appauling suffering of patients in ICU. ALWAYS call the consultant: look at the bigger picture or you will end up resuscitating someone who has no hope of survival and who will gag and gasp of that burning tube in their throat. till they die. how vulgar is that?

nursey, interesting view. in my experience the survival rate at least in our icu units is quite good. so i advise junior doctors to tube if in doubt. rather a bit of appauling suffering for a while than death, which tends to be permanent.

junior doctors from south africa, do not always call the consultant. in fact only call the consultant after the fact. look at the bigger picture or you will end up condemning someone to death who otherwise had a chance because you were too scared to tube.

yes it is possibly 'vulgar' to wane away with a tube down your throat, but it is even more vulgar to bow out early because your cowardly doctor ran off to call his consultant.

in the end it comes down to odds. here the icu survival is pretty good and i assume where you live there are consultants hiding around every corner and at the junior's beck and call. here we must tube. there you can go running for a consultant.

Junior doctors have to learn somehow.

In the hospitals I've worked in the consultants aren't even around most of the time, if someone needs a tube the junior better be damn ready to do it.

@Nursey that is a pretty inflammatory statement.

In SA, our juniors are generally excellent (especially my residents!) at deciding if something is futile. Even if they are over-enthusiastic, placing a tube never has to be the final word in a patient's care. Rather go all out and then withdraw care at a later stage if further intervention is deemed to be futile.

Your comments suggest that you have had no experience in a good critical care unit. People who are well looked after in ICU/ITU don't gag and gasp with a tube in their throat. I agree with @Bongi....

Nursey, I must agree with Albino and DocZZZ (and Bongi) and will cite a personal example if I may.

Some years ago I had to go through a rather unpleasant procedure. Whilst completing the Booking Sheet, one of the questions was "Would you be prepared to have students present during this procedure?" I ticked the box with alacrity, somewhat confused as to why they'd even ask that question. Now granted, the procedure is on pretty private pieces of kit, but these are medical students we're talking about. They're not dragging in the porters, night-watchmen or potman from the canteen; or roaming the corridors for some vague visiting relative who may want a quick tour of the cervix!!! IM(ns)HO, how the Dickens do students learn anything if they don't get the chance to do a Show-and-Tell session? And at some point, Show-and-Tell is going to have to become Get-on-and-Do, otherwise as Albino says, they end up being consultants who are fan-bloody-tastic at theory, but pretty darn rubbish at doing. Hot air is good for nothing except inflating hot air balloons. From my perspective, if they aren't squeamish about watching (and smelling) pre-cancerous cells being nuked, then educate them for goodness sake!