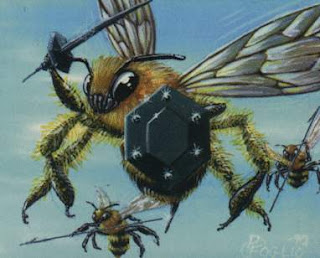 my good blog friend ramona suggested i do a post about my other interest, beekeeping. one story immediately sprung to mind which sort of connects to surgery.

i was in my vascular rotation. it was busy. we did 15 calls a month and the days were really full. yet, somehow, in my off time, i made extra money by removing wild beehives from people's houses. naturally most of this work was done after hours, when the sun had set. this is the best time to work with the somewhat aggressive african bee so it suited me fine.

then one monday the theater list ended up being cut short due to a lack of icu beds (a common problem in our neck of the woods). this gave me a few hours off that afternoon before i had to be back for the m&m meeting (morbidity and mortality meeting). it seemed ideal to quickly remove a hive i had on my to do list. that way i would actually be able to have an early night. but i would have to rush.

i charged home, bundled my equipment into the car and drove to the house which happened to be in one of the outlying suburbs of pretoria. only when i got there did i realise i didn't have my smoker with me. not too bright, i thought to myself. but at least i could check out the hive and come back later, more prepared. it was too far to go back home, come back and do the job before the m&m meeting.

i introduced myself to the owner. immediately her Rottweiler started...well, hounding me. i'm nervous about rottweilers on a good day and the fact that the owner informed me they only get aggressive after two years of age didn't help (she was also kind enough to tell me he was two years old). she left him to his own devices which included jumping up on me and nipping my heels. i should have left then. i didn't.

the hive was in a hole in the wall in the garden. the opening was flush with the ground and therefore very difficult to access, especially because when i bent down the dog would jump onto my back. it was not a hive that i would be able to recover. that meant it was going to be an extermination job. armed with this new information i decided the smoker wouldn't be necessary seeing that i was going to kill them anyway. i had my poison (a tablet that, once lit, gives off clouds of billowing poisonous smoke. the idea is to light one, throw it into the hive and try to block up the entrance.) and at the time i thought that would be enough. looking back, i was foolish. i was not fully prepared (i didn't have my smoker), i was rushed (i needed to get back in time for the m&m meeting) and the dog was making sure that my mind was not on the task at hand. the fact that the owner did nothing about her dog was also a source of intense irritation to me. i should have left then. i didn't.

i asked the lady for a spade to access the hive more easily and suited up. i approached the hive with the dog still all over me and started digging. it was at that moment that i became acutely aware of how effective smoking bees is. these bees that hadn't been smoked immediately came pouring out of the hive in an almost solid mass and attacked as only african bees can.

two things happened simultaneously. one caused me great personal delight and the other caused me great personal consternation. the first was that the bees did not only attack me, but they also attacked the dam dog. i heard him yelping in pain from multiple stings as he finally left me alone and ran for cover. the second is i came to the shocking realization that, due to being rushed and harassed i had not pulled the zippers around my ankles down. there were two circles of exposed skin at this level. the problem was with my gloves on i could no longer pull them down. to remove a glove would be catastrophic. i had no choice. i had to proceed.

without going into too much detail, i finally got the smoking tablet into the hive and closed the entrance. most of the bees were probably out at that stage, trying to kill me, so i'm not too sure how many i actually killed. the queen and all the brood would be dead so the hive would not survive. my work was done. however i had sustained so many stings on my exposed ankles that, although i'm not allergic, the shear volume of poison that my body had taken was making me a bit dizzy. i needn't elaborate on the level of pain that that many stings causes, but it is enough that you tend to notice it.

the owner paid me by pushing the money under the door. clever move. besides i was feeling so light headed i thought i might pass out and look really stupid. i already felt that this was not the most professional job i had ever done. to collapse on her doorstep would not be a good idea. then i finally left.

i drove to the nearest chemist where i bought celestamine, an antihistamine steroid combination. to be honest i was considering buying adrenaline but decided against it. then i rushed back to work, charged into the m&m meeting and collapsed into my chair. moments later i was presenting my cases for the week with a throbbing headache, slightly blurred vision, a ringing in my ears and excruciating pain around both my ankles. relatively speaking the m&m went very well.
Posted by Bongi at 3:41 am

You're a stronger man than I. I may have tolerated the pain, discomfort, etc. but I would have stopped WELL SHORT of actually doing any presentation. That's why you wield the scalpel and ppl like me retract/watch. ;)

Great to have heard from you on Dr. A's show!

(you'll also be proud to know that I looked up the title and know what it means ;) )

Great story! I have a feeling you have never forgotten the smoker since.

This was so cool! I wanted to start beekeeping a while back, but then I realized that it would be much easier and cheaper to buy even the expensive honey than to actually raise the bees.

And anaphylaxis is one of my phobias. It is a scary scary feeling. I would have flipped out in that situation.

msilf, actually in our setting, it doesn't cost too much to get started. usually you can get bees from the wild. truth be told i once did buy a hive, but only once. i was too eager to get one at that stage.

flipping out is exactly what you mustn't do, especially with our bee which tends to be a bit angry. i once had to go and clean up a situation where a beekeeper flipped. he ripped off his mask and ran. a few stings later and he was ok. but he left the hive open and was too rattled to go back. his boss called me in to go and close the hive. i thought it was hilarious. professional beekeepers calling the amateur in to save the day.

Sounds hideously painful, and you didn't even get a baby out of the experience.

Bongi, that sounds like another good story to tell. Looking forward to the next bee story.

rlbates i just told the story here in the comments. ;)

This reminds me of the quote, "Impending death has a way of focusing the mind" or something to that effect.

I was just recently hiking out in Arizona with my wife, heard this "chattering" sound (was hard to place really), when I looked ahead on the trail and saw a rattlesnake coiled back ready to strike. A step or two more and it probably would have, in defense.

I forgot that you used to be a bee keeper. I bet that Rottweiler feared you after that encounter.

I personally love rotties, but even I would have probably balked at the idea of one jumping all over me if I had a bee hive to tend to. Kudos to you for this feat. The M&M at the end is just a nice cherry on top, right? :)