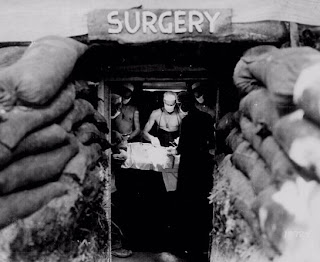 one of my friends was sent to a homeland hospital when he did his military service (the old regime bolstered the homeland hospitals with whatever doctors they had at their disposal, which somehow makes the present government's totally disasterous management of the department of health seem so much more ironic). anyway, having spoken about war doctors, albeit in a different context, and also about my anesthetic escapades, i thought i would relay this typically south african story. (to be honest, eish reminded me of it with his last post too.)

the hospital was in the middle of nowhere (ok it was slightly to the left of the middle of nowhere, but you get the idea). when he arrived for his first day he was surprised to find that almost everyone was still on leave. only the superintendent was still there. the next surprise was that he was on call that first night. i suppose, looking at the facts, that wasn't really too surprising.

anyway, there was a caesarian section that needed to be done. the super gave my friend the option of either doping or cutting. my friend chose to cut. and soon they were working.

quite soon my friend noticed the blood was looking quite dark. he mentioned this to the super. the super snapped at him, saying he knew and was trying to fix the problem. it seemed the boyles machine (anesthetic machine that delivers a mixture of oxygenand anesthetic gasses to the patient) was broken and there was no air delivery to the patient. he decided to switch to manual mode where he would have to pump air in with a hand held bag. but, lo and behold, the bag had a hole in it. he sent the floor nurse to get another one. meanwhile he had to do something to give the patient oxygen. he resorted to blowing directly into the endotracheal tube with his mouth. desperate times call for desperate measures. at this point let me once again assure you this happened, many years ago, but still. finally, just as the patient was starting to become fairly light due to not getting enough inhalation anesthetic, they got another bag, connected it up and got things back on track. then...

the lights in theater went out. suddenly everything was pitch black. fortunately the floor nurse was a smoker and had a lighter. with this she illuminated the field while someone else rushed off to get a torch. and thus the operation was concluded by torchlight.

apparently after that nothing else that happened in his time there could phase him at all.
Posted by Bongi at 4:19 pm

I did the same thing when a spanking brand new anesthesia machine broke down during induction. I couldn't find the ambu so I breathed that patient mouth to ETT. (I used a filter so that we wouldn't exchange any microbes.) Needless to say, my quick response made a good impression on the surgeons (who, I might add hold me in the highest respect (hard won, I assure you)).

Funny phenomenon that. How kak always happens in a cascade. Sorry Bongi, that's the second time I've vloeked on your blog. But hey, kak is kak!

Haha! Slightly to the left of the middle of nowhere. Hee hee.

But seriously? That's a crazy amazing story! Machine breakdown and a blackout all during one operation?? Thank goodness they could improvise well, and got it all back on track. How scary it must've been for your friend!

bongi - those of us who know a little Nederlands,a little Ostfriesisch and a little PlattDeutsch might understand more than you think.

zoe brain, good to know, although i don't recognise two of those languages and don't know where they are spoken. there is nothing on my blog that is exclusively for anyone although a tongue in cheek stance should be adopted with a lot on my blog.

except the stories which are true.