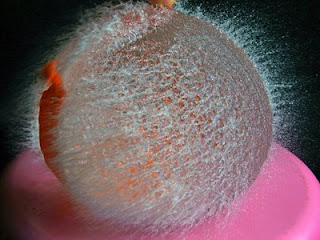 there is nothing pseudo about a pseudoaneurysm except that it is not actually an aneurysm. where an aneurysm expands the wall of a blood vessel, in the pseudo variety the blood escapes from the vessel altogether creating a ballooning of turbulent blood flow outside the vessel's constraints. both may burst, but, seeing that the one in a sense has already burst, when it bursts again it is not an understatement to say this is not a good thing. at that moment you hope there is someone who knows what to do. or in other words you are not in rural south africa.

it was during my witbank days (way back when i started blogging). i was up in my office (a thing no self respecting surgeon should ever have) trying to fend off the boredom, probably by blogging, when the call came in. it was the radiologist, an old man who worked in the state hospital as part of his semi retirement gig. he didn't sound happy, very unusual for a radiologist. he told me that he had done a sonar for a pseudoanuerysm of the brachial artery (the upper arm) and the thing had burst. he had then called the surgeon on call, a medical officer, which is usually the best you are going to get in the state. he felt the medical officer wasn't showing due urgency and was worried she didn't have things under control. he had therefore gone over her head and called me. i ran.

i entered the room. there was blood everywhere. the upper arm had been bandaged closed, but still there was bright red blood oozing from the bandage and expanding a new puddle of blood below it. the patient was already confused, and very pale. i was worried. i took over.

soon the medical officer had been sent off to theater to get them ready for the worst eventuality. a junior doctor had been delegated to get blood. i got better lines up for fluid and moved the patient to theater. quite soon we were ready to operate. when i took the bandages off in the controlled environment of theater, i was honestly shocked. there was about a 10cm diameter area of necrotic skin stretched tight over a very large mass that apparently had been pulsatile before the application of a tourniquet. i wanted to know how this had been allowed to happen. pressure necrosis is not something that happens suddenly without warning.

the patient had presented to a peripheral hospital with a pulsatile swelling in the brachial area about a month after a common or garden stab wound to that area. the peripheral doctor had made the tentative diagnosis of pseudoaneusysm and phoned the surgical medical officer at our hospital. she apparently told him that we would not accept the patient until there was a sonar confirming the diagnosis. the poor peripheral doctor obediently phoned the radiology department where he was given an appointment in two weeks time. he then admitted the patient and observed the aneurysm expand before his eyes. finally he was observing pressure necrosis developing in the skin overlying the aneurysm. one can say he didn't think to contact the surgical department again but he rested secure in the fact that a so called surgeon had told him he could wait and wait he would. after all it wasn't his mother or brother or friend and he wasn't going to be sued in the state health department, so why should he care? this is, after all, africa the continent of selfishness and cheap life.

when the patient finally ended up before the radiologist, he went ahead with the sonar although it was clear there was a large area of necrosis over a pulsatile mass. how could he know that the gentle pressure of his sonar probe was all that was needed to allow the pseydoaneurysm to break through the skin and cause a massive pulsatile bleed. thjat is when he called the surgical medical officer. i suppose one could say that at least it happened when the patient was at our hospital and not still at the peripheral hospital.

i had to debride the wound and repair the artery with a venous interposition. only problem was that after debridement i didn't have tissue to cover my graft. i tunneled it as best i could and hoped for the best.

a few days later we amputated when the graft burst.
Posted by Bongi at 12:33 pm

Email ThisBlogThis!Share to TwitterShare to FacebookShare to Pinterest
Labels: aneurysm, pseudoaneurysm, this is africa

I've sat here trying to imagine the wound and the local skin left for coverage. Can't think of any local flaps (due to brachial artery injury) that would have helped you. I think the best coverage for the problem would have been a pedicled latissimus dorsi flap. Very tough problem, made worse by delay.

rlbates, i thought of flaps but i have no plastics experience and there were no plastic surgeons there. the initial tunelling was under the biceps but this didn't work. a second burst was obviously once again life threatening so limb loss was the lesser of two evils.

next time i'll give you a call.

I Was just studying aneurysms this afternoon. Kinda skimmed over upper extremity vascular stuff. It was the visceral aneurysm of the splenic artery and the classic sequence of double rupture that I was more interested in!
(and of course the better known AAA)

Remind me never to have either in rural SA

I think your medical officer was ultimately responsible for what went wrong here. I don't believe the peripheral doctor didn't care. Working in the periphery, I know how difficult it is to get a patient to be seen at the provincial hospital and how frustrating it is to have to keep sending the patient over and over and over again before they are seen to. That peripheral doctor probably felt his hands were tied because of beurocracy and so did what he could under the circumstances. Doctors working at provincial hospitals also have a tendency to "pull rank" and berate and belittle provincial doctors trying to get their patients accepted.

Berate and belittle peripheral doctors that is.

anyone using alloderm or one of the other biologic materials for a situation liike this?

buckeye, in state facilities that stuff in absolutely not available, especially at such short notice. because i used a venous graft, strictly speaking it needed to be covered by living material, hence my ultimately failed attempt to tunnel the graft.

to tell the truth i only became aware of alloderm quite recently. (i saw it on your blog a few months before a rep showed me a sample actually). i have not yet used it. i'm thinking massive hiatus hernia might be a good place to start.