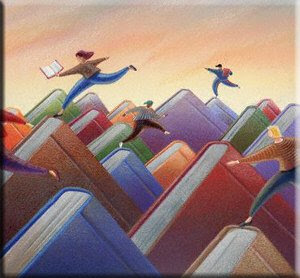 i was on call. a slam dunk came in. he had a two day history of sudden onset severe abdominal pain. clinically he had a rigid abdomen and x-rays confirmed free air under the diaphragm. not that it changed the decision, but he was also feverish and his white cells were through the roof. it was clearly a perforated peptic ulcer with generalised severe peritonitis (his stomach had burst and everything inside was rotten). the only question really was how had he managed to survive two whole days without seeking medical help.

i informed him he needed an operation. he said no. i was astounded. i pushed on his abdomen again. he went through the roof. i explained that there was clearly something severely wrong and an operation was absolutely needed. he said he wanted a medical alternative. the more i explained that there was a physical hole in his stomach requiring a physical solution and that no magic drug was going to close that hole the more he stubbornly refused. i tried the fear angle. i told him that in all probability he would die without surgery. he simply disagreed with me. he thought he'd first try non-surgical treatment and if that didn't work he would consent to surgery. and then he left. he simply took his free will and walked out the door.

the next morning when i presented the cases of the previous night i told everyone to keep an eye out for him. i expected him to turn up again in one or two days in septic shock and kidney failure. it would be decidedly more difficult to pull him through then, if even possible.

for the next few mornings, before the hand over meeting, i would ask the team on call if he had returned. the answer was always in the negative. after four days i accepted he must be dead. finally my turn to be on call came around again, almost a week later. and who should turn up on the proverbial doorstep but that same patient. my house doctor came to me saying he is begging to be operated.
"how sick is he?" i asked. "is he nearly dead?"
"actually he looks surprisingly well, but he is adamant he wants his operation now."

i walked into his room.
"so you're back?" i asked. "you have decided that you actually do need an operation?"
"yes doctor, you were right. the pain has been too much." i examined him. his abdomen was actually quite soft. it was much better than when i'd seen him last. the x-ray showed no free air in the abdomen. his blood work was nearly normal. his white cells were only marginally elevated. i was amazed. i knew that a very small fraction of people with a perforated peptic ulcer could heal if left alone, but generally they are all operated, so it is really only a theoretical posibility. in all reality most people would die. this was amazingly enough a man that had defied the odds. he was now just tired of the pain. and even the pain was no longer excruciating but now only severe.

i thought it quite ironic. when i was adamant that he needed an operation he disagreed. now that he was ready for an operation i was in doubt. i went through all the results and knew what needed to be done.

"doctor, you were right. i do need an operation! i'm begging you, please operate me! please doctor." i admit i smiled a bit as i looked at him and answered;
"no!!"
Posted by Bongi at 3:53 pm

A rare pleasure! I wonder how he spent that week...

Amazing that he survived.

I'm with Dr Val - I'm amazed too. I'd love to have seen one of those come into A&E. Also, your blog's completely arresting - I read the whole front page in one sitting. I'll be back more often from now onwards to stalk you :)

People always give up when they're almost there?

My name is Lee Sherry and I work in the web marketing department at Medical Scrubs Mall.

Are you allowing advertisers on your site? Or maybe accepting donations for an unbiased interview/review of some kind for Medical Scrubs Mall and/or Uniform Advantage Scrubs?

Let me know if this is something that can work for you.

You can reach me anytime over email at lsherry(at)medicalscrubsmall.com or at 954-626-2145.

Lol... this could have been straight out of "Waiting For Godot". Proof that there is divine justice... with a sense of humour, too :)

By the way, I remember you teaching me how to put up central venous lines when I was a frightene 5th year. How cool to meet you again online.

Hi... Sorry to do this via comments, but I couldn't find your email on the site. I've been trying to organize better cooperation between South African (and latterly African) science bloggers (including, of course, doctors and so on). See: http://ionian-enchantment.blogspot.com/2008/12/african-science-blogrolling-for.html

Great case! I had a patient with benign pneumoperitoneum not too long ago. Strange how the body sometimes can just take care of business without us....

Love the story and LOVE the ending! Thanks.

As someone who has lived with pain, I can understand - a bit.

Like hitting Heartbreak Hill in the Boston marathon -- you pour on the juice to make it through the hardest stretch, and then you need the finish line to be close. But those last five miles, even though they are downhill, can be the hardest. You gave your all, now it should be over. When it's not, sometimes you fall down and need help.