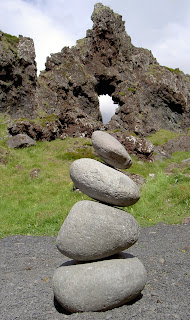 this post is also about foreign relations, but, unlike the last, this actually has to do with surgery.

one thing about nelspruit is when people visit the kruger, if something goes wrong, they end up here. one such group was a european family that stopped by the hospital after a pretty devastating car accident. two people died on the scene, one walked away with minor injuries and one passed under the knife of our neurosurgeon for a brain bleed en route to icu where he was destined to spend some time.

after a few days in icu the patient's condition started deteriorating severely. his blood pressure just wouldn't stay up and his temperature wouldn't go down. then his kidneys started having trouble. his neurosurgeon excluded the head as a source of his sepsis. he then did a ct of the abdomen to make sure there wasn't something else alltogether that he was missing. with ct in hand he called me.

"he is deteriorating fast and the head is not the problem." he told me, "but the radiologists say he may have acalculous cholecystitis. what do you think?" acalculous cholecystitis is inflammation of the galbladder without the presence of galstones. it is usually seen in the very sick or in icu patients. however it is very rare. most consultations for this condition turn out to be false alarms. however, if you miss it you may really have a problem.

"it is very rare," i said, "however if you miss it you may really have a problem." i then went on to say the thick galbladder wall was often a result of a generalised edematous state much more commonly seen in icu patients. i however assured him i'd stop by and take a look.

the patient was still heavily sedated post craniotomy, but i could still elicit pain in the area of the gallbladder. hemodynamically he was in deep trouble. he seemed to be in septic shock and his kidneys were in early failure. i stopped by at the radiology suite and glanced at the scan. the wall was much more edematous than the rest of the patient. putting everything together i felt there was no choice but to operate. the only question was whether i should attempt a cholecystectomy, to remove the gallbladder or to just do a cholecystostomy, a less invasive drainage procedure reserved for people who may be too sick to survive the larger operation.

we started the operation late at night. i decided to start laparoscopically and decide what to do once i could see what was going on inside. the fundus of the gallbladder was totally necrotic, but lower down the tissue could still be worked with. a laparoscopic cholecystectomy looked feasible. and that is what i did with a bit of difficulty.

after the operation the patient improved in leaps and bounds and in two days time was out of the proverbial woods. i was feeling pretty chuffed. once i was quite happy a day or two later, i handed him back to the neurosurgeon for the rest of his sojurn with us.

some time after this the neurosurgeon got a call from the family doctor from their home country. he was indignant. he wanted to know why the gallbladder had been removed in such a young male, a group that usually does not have gallbladder problems and that in the absence of gallstones. he felt it was totally unnecessary and demanded an explanation. i could imagine him seeing us as knife wielding african savages seeking what we could cut out of unsuspecting civilised peoples. i mean after all what would doctors from a backward place like south africa actually know about medical conditions and the treatment thereof. fortunately the neurosurgeon wasn't in the mood to mess around. he educated the poor fool about the existence of the condition acalculous cholecystitis, which he had clearly not heard of. he then referred him to a few articles about the management of the condition and invited him to phone back afterwards if he still had questions.

when i heard all this i was not impressed. the fact of the matter is that we had saved the boy's life life. it seems from the call from his home country that there he may not have been so lucky. yet no doubt his family had been told that we were money grabbing knife mad morons randomly lopping out organs as the fancy strikes us. then i became more philosophical.

until fairly recently south african medical training was up there with the best in the world. so until fairly recently such attitudes were absolutely uncalled for, but as i have mentioned before, this high standard may be slipping a bit under the careful mentorship of the present regime. so maybe it is becoming progressively more justified when foreigners express reservation in our knowledge and skills. anyway, i knew that i could be proud of what i had done and i left it at that.
Posted by Bongi at 5:00 pm

i understand what you mean when you say our quality of healthcare is falling, but as a SA med student im certain, experience and opportunity wise we are far ahead of the 1st world countries.

A= accuse
B= blame
c= control

Surely you sent this nasty necrotic gall bladder to a pathologist, who, despite your location in the southern hemisphere, confirmed its diseased state. Surely you had an assistant operating the camera who can corroborate the indication. Not to mention the fact that that you solved the patient's problem. Still, why does this guy think he can diagnose so much better than you over the telephone when you were the one actually looking at the patient? What was he thinking, calling you up and making accusations like that? geez. Fax him a copy of the pathologist report with appropriate comments penciled in the margins. I feel irritated for you.

anne, yes the histology did confirm the diagnosis.

fortunately the guy phoned the neurosurgeon and not me. he was the primary doctor of the patient. it seems the neurosurgeon put the guy squarely in his place. i got a rundown of events when i got back from leave when the everything had run its course. after being annoyed for about ten minutes i was over it.

Maybe it's my medical rather than surgical point of view, but I try to do what I can to defuse intense emotions, especially when they're coming from one sort of ignorance or another.

I think the boy's doctor could legitimately wonder and maybe even ask how things came about, but to complain or accuse is at the least rude. I've not seen rudeness answered with some other negative emotion being very productive -- one begins to sound defensive.

greg, as always wise words. fortunately i was not on the frontlines for this one. the neurosurgeon fielded the call. actually the family were all ok with the treatment and grateful and in the end that's what counts. i'm not overly concerned what some arb doctor half way around the world thinks about me actually.

Yes Bongi, you're right, you did say that the neurosurgeon handled it in your post. My emotions got the better of me when I read the story, and I vented on your comment board. You touched a nerve, that's all; it is a symptom of good writing ;-)

"until fairly recently south african medical training was up there with the best in the world."

Agree entirely as I have two Child Psych, colleagues and both are well trained.

Thank you for being part of the Tour de Grande Rounds.