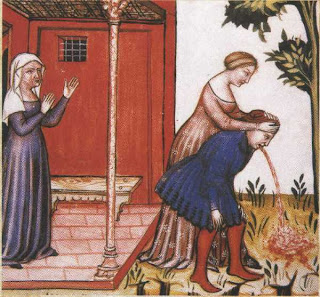 surgeons are not stand back kind of people. they fall more comfortably into the category of charge in where angels fear to tread. i think the work tends to preferentially attract those type of people. but sometimes standing back can be the lesser of two very evil evils.

the call was a standard weekend consultation. the patient had hematemesis and his doctor was worried. nothing i hadn't seen many times before. but when he came in the patient's wife had a few more details to spice the story up a bit.

just about a year ago he had had a resection of his stomach for cancer. the surgeon had told his wife they couldn't get all the cancer out because it was growing into some big blood vessels behind the stomach. for some reason they both decided not to tell him this. so when he was referred for his chemotherapy (something that could not be described as awe-inspiringly effective in stomach cancer) he truly thought he was well on his way to full recovery. and now he lay before me, pale and restless.

he was a shadow of what he once must have been. his skin hung loosely as if in remembrance of the large man it once covered. i was not happy with the mass i clearly felt just under his left rib margin. the cancer was back and it seemed angry. i got the necessary drips running and ordered blood. i considered dropping to my knees but due to a back injury when i was still a student i wasn't sure i'd be able to get up onto my feet again.

the wife called me aside and told me the patient was not aware of the fact that the operation was not a roaring success and therefore that he was essentially living on borrowed time (which i grimly thought he is about to pay back with interest).
"you need to tell him." i said.
"no!! doctor!! i can't do that." she needed the truth.
"this man, your husband may die here in this hospital within a day or two. you need to speak to him." but she would hear none of it. she also didn't want me to tell him things were not so rose coloured (i suppose depending on what colour roses you're talking about of course).

the next day the patient was feeling much better. amazing what a bit of blood will do. we chatted a bit. you know, shared a moment. he even laughed at how bad he had felt the previous day in comparison to today. then it was back to business. in this case business meant i was going to take a long, not so thin pipe and stick it down his throat to take a quick look at the source of the bleeding in his stomach. i sort of lied to myself, telling myself that maybe i'd see something that could be fixed with a knife. in truth i knew what i would see. the palpable mass and the history dispelled almost all my doubt (or hope). but i knew i needed to look. i needed to know for sure how much or how little i would be able to do for him. maybe i needed evidence for one day after it all when i am called to account.

the cancer was a large fungating mass with a deep necrotic core. it was gently oozing blood but i could see it was capable of so much more. it seemed to me it had stopped its torrent of blood long enough to give me a glimpse as if to taunt me. as if to say you know me and you know you have no power here. it was right.

then i went against the wishes of his wife. i told him this cancer was going to be the end of him. he looked at me with a calmness and a gentle smile.
"i know."

he probably had known for some time but i think he felt he had to go along with the charade and maintain the lie with his wife. he seemed relieved that the truth was out. he seemed to relax.

that night the sister called me to tell me he was bleeding massively. i explained the situation and asked her to push blood iv. if that didn't help nothing that i could do would. the next morning he was dead.

somehow when we sit behind our computers and in our nice expensive offices deciding about the futility of certain treatments and who should get what based on cost or whatever, the actual point is lost. the nice old man finally vanquished by the hideous monster called cancer or the old lady with heart disease or whatever who is forced to succumb to the dark inevitable is the point. it is the person, the individual. the one like me. and maybe like you.

i was just left with a sense of how difficult it is to stand back and let someone die when you know what that means. it, i assume, is much easier for the powers that be, snug in their artificial real worlds.
Posted by Bongi at 9:27 pm

the frailty of life yet the triumph of human spirit.

This post reminds me of one of ur older posts about a young man with a fungating facial tumor.
For the longest time i was under the impression that surgeons always cut to (in an attempt to) cure. Im finally begining to grasp the concept of surgery for paliative purposes now that im rotating through oncology surgery. We are taught that paliative care shuld neither hasten nor slow down the death process.
I guess it is not as black and white when the patient is sitting in front of you. It is a tricky subject. . .atleast for me, still being a student and all.

Life is pleasant. Death is peaceful. It's the transition that's troublesome. - Isaac Asimov

You have such a way with words.

I was thinking that he knew. No one could be that sick and not know.

Interesting how some people do that dance of denial... around the dying person..and the dying person will go with the flow because they don't want to upset the others... and so they're all held captive in their mutual silences.

I am sure it helped him to talk with you.

Your blog is really interesting. Because it is nice to read about how a Doc. thinks.
My impression is that I have never met a patient with cancer who did not know that they were dying of cancer. Even if they had not been told they had cancer. So I think everybody is entitled to be told the truth.
I worked as a nurse when patients was not informed. And felt that both the patient and the family suffered. Both part had to talk about the situation and they could not because they both believed that the other part did not know.