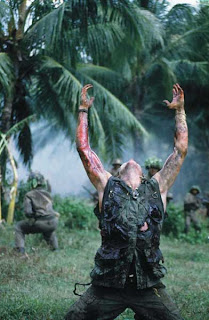 i'm not a war doctor. well not in the truest sense of the word. but sometimes i think there are similarities between whatever it is i am and a war doctor. i'm not talking about the fact that i have operated more gunshot wounds than i can count because of the amazingly high crime rate in our country, although that is probably part of it, but i'm talking about being first hand witness to collateral damage.

when the new government came to power they decreed that no state doctor could do private work. bearing in mind almost all state hospitals were run by private doctors, in one fell swoop they got rid of almost all their senior doctors. they realized their mistake, but it was too late. those doctors did not return. the next plan was to import doctors from cuba. but having doctors from a somewhat less than free country working in an essentially free one was wrought with problems. their numbers gradually decreased as they defected. the next plan was to introduce a community service year after the intern year. they then had enough doctors but they were always junior. this is pretty much the way it has stayed up until now. then there was a change in the training of doctors. it seems that the powers that be felt that it shouldn't be so difficult. some pretty dodgey doctors were created.

the problem with having your hospitals manned by junior doctors is that they tend to be junior. junior doctors are quite often not so clued up. experience may be lacking. and this brings me to a story by way of explanation. unfortunately this is not an unusual story.

there is a physician (internist) who does a session in the state hospital in a smallish town some distance away. one day when he was there they asked him to evaluate an x-ray of a patient they said had heart failure. they had made the diagnosis largely due to laboured breathing which they attributed to pulmonary edema. they had been treating her for three days to no effect. he took one look at the x-ray and was dismayed to see free air under the diaphragm (this pretty much implied that the actual diagnosis was a perforated peptic ulcer). the physician was shocked. he told them to send the patient to some place where she could be operated.

i was doing a gunshot wound in our local state hospital as a good war doctor should when i heard the patient was on the way. i knew it would take some time, so after finishing i shot off to the private hospital to quickly do another case. after that they phoned me back to the state hospital to oversee another gunshot abdomen. while there i was informed that the patient had in fact arrived but promptly died. i suppose three days with a perforation and fluid restriction (which is part of the management of heart failure but not too good for perforation) were just too much for her to handle.

one thing i have realized is i can't change the world, much less do much about the government's policies of death and destruction. all i can do is the best where i am. just like in a war there will be people who die, people who have nothing to do with the corridors of power, because of the decisions of their leaders. it is also not really the fault of the poorly equipped (intellectually) junior doctors in these small towns. they are simply the results of political blundering. so yes in many ways i am a war doctor. sometimes that is the only way i can deal with some of the things i see.
Posted by Bongi at 10:04 pm

Bongi it's a fucking tragedy. Pardon my french.

I second, Walt. It's good for your country that you continue to do what you can.

walt, as dit frans is dan is ek vlot.

ramona, that's not what my government believes

I'd very much like, and by like I mean it would most likely sicken me, to compare the numbers of South African victims, to Iraqi or Afgan dead over the last 7 years... Sadly I don't think War Doctor is an inacurate label at all.

Keep fighting the good fight, Bong. Your work represents a different kind of heroism than that seen on the battlefield, but heroic nonetheless...

It's too horrible - I'm terrified of the big Out There. And I feel so terrible for all the people who are Out There - the patients and doctors.

Have you heard the blind chicken boy contingency plan?

"THE Department of Health is set to introduce a new programme designed to address human resources shortages at government hospitals. Today, Health Minister Manto Tshabalala-Msimang will launch the Clinical Associate Programme in Mthatha, Eastern Cape, the worst affected province in the country regarding healthcare. The programme is expected to ease the burden on already overburdened hospital staff in the public sector. According to a Health Department statement, the programme was conceived after a long process of consultations with the country's medical schools and the department as well as extensive international studies. The intention is to produce mid-level health workers within the context and guidelines of the medical schools and the Health Professions Council of SA (HPCSA). The workers will receive training that will qualify them to perform physical examinations, diagnostic and therapeutic procedures, interpret findings and formulate a diagnosis for common and emergency conditions, among others. The programme is not a replacement of any existing medical training offered in the country's universities. Walter Sisulu University and the universities of Pretoria, Limpopo, Witwatersrand as well as Medunsa will offer a three-year Bachelor of Clinical Medical Practice. The Department of Health will fund the programme by providing bursaries."

I sense a new surge of bombay gas abscesses & the like on the horizon!

skakhi, thanks for the comment. yes keep your eyes peeled for the notorious bombay gas abses.

they mention nothing about the fact that the same manto is presently actively legislating to get rid of as many private doctors in the country as possible. they (the anc) have messed up public health so much it is no longer a challenge. now they are concentrating their efforts on messing up all health care in the country.