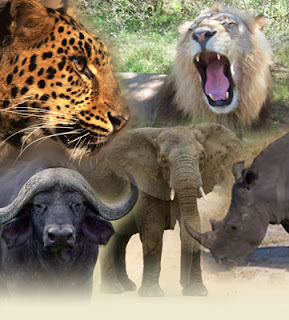 unlike the perception that some first worlders have about south africa, there are not wild animals walking the streets and there are not attacks every now and then by said animals (except for my cousin who was eaten by a crocodile. that is a bit too close to be discussed on my blog though). however i'm starting to have my doubts too.

quite soon after moving to the lowveld i treated a patient that was bitten by a hippo. let me assure you that that is no small bite. i think it is remarkable to survive something like that. then there were the two crocodile attacks. the one actually had a tooth embedded in the arm. it seems that crocodiles often loose teeth. to them it doesn't matter because they can replace their teeth right through their lives.

but it seems recently we are working through the big five.
i didn't treat the guy who was mauled by a leopard. i didn't even actually go and see him. he survived because the leopard itself was terminally ill and wasn't in good fighting form.
the guy who was attacked by a lion survived because he managed to get a shot off before the lion got to him. the shot apparently took out its top jaw. the lion could therefore not bite but still shredded him quite badly with its claws. i'm a bit embarrassed to say i turfed him off to the orthopod once i discovered his injuries were all to the arm muscles.
around the time of the lion patient i heard from a friend of mine in the kruger that he had a contact with a Buffalo. luckily the beast had been darted and was pretty nearly asleep already when it knocked him down. otherwise he probably wouldn't have been around to tell me about it.

we haven't quite yet covered all of the big five, so there is a part of me expecting a rhino attack sometime in the next few weeks.
Posted by Bongi at 8:48 pm

Bongi .. you are an original! I just love your blog! Thanks for the smile!

We get some alligator, mountain lion, and bear attacks in this country. Wouldn't even want to try to rival you in this area. I find myself hoping you won't get the rhino attacked patient.

ramona, of course i also hope we don't get that patient. the doctors tell me there was a rhino attack a number of years ago. apparently the guy didn't survive.

Wow! Wild animals can do a lot of damage. I've been fortunate not to have had any close encounters with the local dangerous specimens. My condolences on the loss of your cousin.

As ever, this post was completely fascinating. I wait with bated for each new one and you never disappoint.

Out of curiosity, Bongi, what's the length of time, here? Are we talking "Big Five in Five Months"(?)...or what? Holy crap! I cannot believe these people survived, but as you said, most of the animals were wounded or ill... as for the elephant, he MUST have been in less than fighting form. Yes, crocs regenerate teeth, and they have hundreds to begin with!

I'm with Ramona--no rhinos on your watch!

dr b the leopard, lion and elephant were each a week apart. the friend who met with a Buffalo was about a month before that. a friend of mine is going on a walk in the park this weekend. i've told him to keep away from rhino (well at least for saturday. i'm not on call on sunday)

Well, I was bitten by a dachshund once at a student's home.

I see great potential for a bingo game amongst your colleagues...

On a more serious note, I can't imagine the pain and damage animals like those could inflict on my fragile flesh and bone. Jaws may be one of my favorite movies of all time, but I can't imagine how agonizing a bite from one of those buggers would be.

Hi there,
I wonder if you might be able to help. I work for a British television company and we are making a new series for Animal Planet called "I shouldn't be alive" in which we retell amazing stories of people who have survived animal attacks.
I was wondering, from your work, if you might know of some good stories of people who have survived an attack and then, say, a few days lost in the bush. These really need to be epic tales of survival - as each film last for an hour - as opposed to someone being rescued very quickly.

It would be great to hear your thoughts on this.

I can see that you get one good story when I am in Kruger Park first weekend of December?! I'll go for a walk when I spot one of the Big5...and hope I survive to tell the story?
I left Africa but Africa did not leave me...Been in NZ 13 yrs, also from Nelspruit (hi Bongi!)