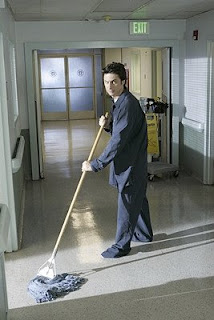 sometimes before you are even called the sh!t has already hit the fan. the mopping up is not fun.

i was on call. as usual i was hanging around in the radiology suite (i spend a lot of my free time there sharpening up my ct scan reading skills. the radiologists even think i'm a frustrated radiologist, poor fools). the urologist phoned me. he had a nervous laugh. most types of laughs of urologists i quite enjoy. but the nervous laugh i do not. he then went on to tell me about a patient he had been referred with possible kidney stone and severe pain, but on the scan they found a large abdominal aorta aneurysm. i quickly called the scan up on the monitor and sure enough there it was. the patient was mine.

there was an 8cm aneurysm. but just anterior to this there were signs of recent retroperitoneal bleeding. this was not good. the guy was just one step away from a fatal rupture. i phoned my vascular colleague in pretoria who was unfortunately in theater but they assured me he would get back to me in about 20 minutes. then another call came through.
"doctor, the urologist says i must call you about his patient. he says it is now your patient. something has happened." i knew i needed to run.
"i'm on my way!"

as i rushed through the ward i saw what must have been the family. they were all looking anxious and some had tears in their eyes. i rushed on. i needed to focus.

in the patient's room it looked like well orchestrated chaos. lying on the floor was a massive man who was as pale as a sheet. the casualty officer was intubating. a sister was doing cpr. the urologist looked up.
"glad to see you! well then i am no longer needed. see you around." and with that he walked out. someone was trying to place a drip with little to no success. a large group of young student nurses were looking on with expressions ranging from shock to morbid fascination to excitement. i needed to take control. only thing is i had seen the scan and i knew what had happened (when an 8cm aortic aneurysm ruptures into the abdomen it causes almost guaranteed instant death).

after a dramatic unsuccessful resus there is usually an eery silence in the room. maybe it is a sort of respect for the departed or maybe it has to do with confronting one's own mortality. i think it has a lot to do with thinking who is going to say what to the family.
"are you going to speak to the family?" i asked the casualty doctor. i had to try.
"no! you are!" great! i thought. i walk in on the closing act and i'm left with the hot potato.

i took time to speak to the nursing staff, telling all those directly involved that they did well and just trying to somehow let the students know that it is ok to not be ok with death up close. then i went quiet. i needed to focus.

the family had been taken into the sisters' tea room. they then sent me in. the mopping up had begun.

i have spoken before about breaking bad news. fact is it is never easy and i'm not sure there is any easy way to do it. i try not to leave the family in the dark too long. once they know i try to be as supportive as possible and to answer their questions as best as i can. usually i am struck by the human tragedy and i allow it to affect me as it should. sometimes when i have been overcome by the relentless nature of my work i must stand back and observe. this was one of those times.
Posted by Bongi at 7:21 pm

Perhaps those on the patient-end of things forget that doctors/nurses are human too, and we need reminders like this that you do feel, no matter how detached you're told to be.

When can I pre-order your autobiography? ;-)

cant u contact the person who wrote Father micheals lottery and see if you blogs could be published? what you write is just as good as that book although of course you would have to find some funny bits. I love the start of the book about the rabies.
p.s. is there anyone blogging about the medical situation in zimbabwe? if so can you put the link on this blog for me to follow?

Yes being detattched is something quite necessary to perform a surgeons job, but again its about how detattched you should be.

travis and malta, thank you for your kind words.

jabulani and surgery, i actually don't believe in the whole distance and dissociation thing. i believe in being in touch with your feelings and allowing the tragedies to affect you the way they should do normal people. having said that sometimes it does get too much and i need to stand back.