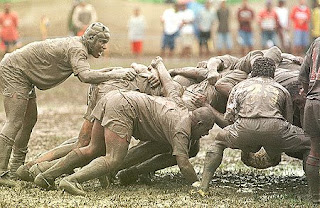 while i'm on the topic of how to handle consultants i was reminded of another consultant who was somewhat peculiar. also while in prague one of my old colleagues from the old days who actually reads this blog asked why i never wrote about this very interesting individual. so here goes. lets just call him doctor d.

doctor d had dogmatic views on pretty much everything and his views were usually fairly odd. he had developed a way of discussing one or other of his views during operations. he could time a discussion about a given topic to last just long enough that as he placed the last stitch he would wrap up his talk. so with a short operation he would just launch into his theories, but with a longer operation he would start by asking each person in theater what they thought of whatever topic he had chosen for that specific operation. i used to enjoy listening to him during operations and sometimes even felt disappointment when the last stitch would be placed while he said,
"and that is why you should not send your children to school but should home school them." or "and that is why you should always wear long sleeved shirts" or "and that is why cremation is wrong" or some such statement.

but on ward rounds my feelings about these discussions were completely different. an operation had a predetermined end, but ward rounds could go on indefinitely. with this in mind i'd instructed the students how to respond to doctor d so as to shorten the discussion as much as possible. i explained to them that if he asks their opinion about anything not related to surgery he is not asking because he wants to know their opinion, but rather that he wants to expound his own theories. if they gave their opinions he would first take time, a lot of time, to debunk their theories before explaining his own. they were under strict instructions to make sure they didn't give their opinion but rather just immediately ask doctor d what he thought. and then after he had expounded his often bizarre theories the students were not permitted to question him on the rounds. if they wanted to argue some point they could do it in their own time when the rest of us would not be forced to stand there, often post call, and listen too.

generally this approach worked quite well and ward rounds usually didn't drag on more than a half hour after seeing the last patient while we heard why a contraception was wrong etc. that was until one day.

we had just seen the last patient on our post call rounds and ward rounds were as good as over. the students were a new group but i had already orientated them about what to do when asked questions unrelated to surgery. so i didn't worry too much when doctor d started.
"what do you think of rugby?" he asked each student. they dutifully were non committal and quickly turned the question back on him. i was smiling inwardly. we could wrap this up in about 5 minutes if no one questioned him afterwards and he still would be none the wiser i was sabotaging his beloved so called philosophical discussions. he continued.
"rugby is a homosexual game and anyone that plays it must be homosexual." i could almost hear my bed calling. we just had to nod and soon we'd be on our way. and then things went south.

one of the students seemed to be turning slightly red. he also seemed to be bouncing up and down on the spot.he seemed disturbed. i realised he was going to go against my instructions and ask something or worse, challenge doctor d. i started recalculating how long it would take for the rounds to end. but what happened then i hadn't expected.

suddenly the student jumped forward with index finger extended, first towards me;
"i know you forbade us from questioning doctor d about any of his crazy theories, but this i just can't take!" and then towards doctor d:
"doctor d how the hell can you say rugby is for homosexuals? do you really think all the springboks are homosexual?"

i wanted to cry. not only were we forced to endure the full length explanation of doctor d as to why rugby was indeed a homosexual sport, but afterwards i was personally taken to task for instructing the students as to how they were to ensure the good doctor d's talks did not go on for quite as long as he liked them to. worse still, the good doctor d adjusted his way of discussing his theories on ward rounds to bypass my influence on the students. never again did we have a short discussion after rounds, whether the students asked questions or not. doctor d also i think trusted me much less after that episode.
Posted by Bongi at 5:11 pm

Each one of us is merely a small instument: all of us, after accomplishing our mission,, will disappear.
Mother Teresa

The Education world produces teachers like this too. "I've been in education 30-mumblemumble years, and there's not a lot I haven't seen/done/experienced/can be told in that time." They are not the first people to embrace new ideas/trends which doesn't bode well for teaching children in a modern era.

i remember doctor d! he was hilarious, except of course you were post call. i remember one surgery opd was spent explaining to us, at GREAT length, the traditional way afrikaner families name their children (first son gets dads fathers name etc etc etc). he was bit odd. never spent enough time around him to know if he was actually a good surgeon or not. but we didnt mind him compared to some of the other wierdo consultants in that dept!

That's hilarious! poor Bongi! I can see how post call it must have been maddening though. Still, I am laughing out loud.

annester, he was a very good surgeon actually.

It still amazes me, at times (when done well, when done seamlessly), how many delightfully dickensian characters I get to meet through the magic of this little machine...

I agree with Dr D. It is a homosexual sport. Coming from New-Zealand we have it rammed down our throats. More money goes into sport then the health system I am sure.
Rugby is a game where all men get sweaty, maul each other, get covered in mud, wrestle a bit then all shower naked together. While other men get all excited watching on, hello if a woman dares speak while Rugby is on T.V she is almost shot. I would expect that level and devotion if indeed they were watching half naked Brazilian women playing Volleyball on the beach...but guys?

neo-conduit, men are strange creatures. what more can i say. however to dogmatically state that rugby is a homosexual sport i think is possibly not scientifically sound. i'm sure homosexuals would enjoy watching it too for reasons you imply, but generally the players and spectators do seem to be heterosexual.

anyway, at least if you had been on the ward round, by agreeing with dr d, you may have shortened the inevitable discussion, so i wouldn't have minded your opinion on this particular ward round.

neo-conduit i've just watched the intro to the teams in the first match between south africa and new zealand and i see why you say they are homosexual in your country. the loving looks they gave each other gave it away. i no longer feel in a position to comment on the sexual preferences of new zealand rugby players. however, what i said above at least holds true for south africans.

Neo-Conduit: I am also an NZer and a mitness as to this coury's maddness when it come to rugby. But have you ever considered that if you came from a basketball oriented family, it might be perfectly fine to talk during the rugby but not the basketball....I learnt not to talk during the evening news!
Please do not make sweeping generalisations about the sexuality of a population - as far as I know, a number of the All Blacks are married or in an equally comitted heterosexual relationship.